A Brief Introduction to the Types of Surface Mining Methods

Surface mining is one of the most common and oldest ways of removing minerals from the Earth. ScienceStruck tells you what the various surface mining methods are, with the definition and facts of each.

Surface mining is one of the most common and oldest ways of removing minerals from the Earth. ScienceStruck tells you what the various surface mining methods are, with the definition and facts of each.

Some of the largest vehicles in the world, such as bucket-wheel excavators, are used in surface mining.

In the manufacturing sector, industries need a continuous supply of certain raw materials like iron, aluminum, and coal. Such materials are found in nature, though in an impure form called ‘minerals’. These minerals do not occur by themselves, but are trapped in rocks called ‘ores’. To make matters worse, ores are found only in certain regions, where they are concealed under a layer of rocks, forests, or oceans.

To get the materials that we need, their minerals have to be removed from the Earth, and purified. Ore deposits that are not found deep within the Earth can be extracted simply by removing the rock layer above them. This process is called surface mining; because contact is maintained with the surface throughout. The other harder method is to drill holes deep inside the Earth to travel beneath the rock layer. As expected, this method is called underground mining.

While it may sound like a straightforward task, surface mining can be accomplished by various methods. Let us see what these techniques are.

Open-pit mining is a method in which an ore is removed by digging a pit in the ground, and is used to remove copper, gold, iron, as well as non-metallic minerals. It is normally used when the rock layer above the ore is too weak to allow underground tunnels. In this technique, circular steps, or ‘benches’, are dug around the circumference of the pit to remove ore from the sides. When ore can no longer be removed from one bench, a new one is dug at a lower level. Thus, open-pit mining is ideal for ore deposits lying under thin rock, or ore deposits in the form of layers which can be easily removed by digging benches. The equipment used for this method is mostly restricted to dump or haul trucks, and shovels, though conveyors can quicken the process.

Quarrying is a type of open-pit mining, but restricted mostly to construction materials like aggregate, limestone, marble, cement, and lime. In this technique, holes are drilled in the rock to insert explosives, which break it into manageable chunks. These fragments are taken to a processing site near the mine, where the rock is washed, crushed, and screened to select material of the desired size and strength. Usually, construction sites use materials quarried near the site to reduce transportation cost. A variety of equipment such as conveyors, forklifts, saws, trucks, crushers, and drills are used in this method.

As the name suggests, this involves cutting rock above an ore deposit in long ‘strips’. This uncovers the ore, which is then removed. When the deposits in a strip are exhausted, another strip is dug beside it; essentially all strips are parallel to each other. The overburden (waste removed to access the ore) from each new strip is used to fill the previous one, and the last strip is filled with material from the first. This helps in reducing the ecological damage on the site. This method is suitable for sites where the overlying rock can be easily removed, and is very common for coal and lignite (brown variety of coal) extraction. Strip mining requires some of the largest equipment ever built, such as bucket-wheel and dragline excavators.

In some sites, mineral deposits are present near the peaks of mountains. However, they are too deep to be removed by drilling tunnels from the sides. In such sites, the ore is accessed by removing the rock above the ore, by planting explosives in it. The ore is then removed, while the waste produced is deposited in river valleys or previously excavated mines. It is the newest method of surface mining, and is mostly used to extract coal. Since this process involves the bulldozing of forests, and a risk of the waste entering water bodies, it has drawn a lot of criticism from many quarters.

Dredging is a method of obtaining mineral deposits from the bottom of rivers, oceans, harbors, and streams. As compared to other mining methods, where the ore has to be accessed by removing material above it, in this case, the river makes the job easier by directly transporting minerals from upstream areas. Dredging involves scooping up mud from the bottom of the water body, removing the minerals from it, and releasing the waste back to the bottom. This technique does not cause large-scale disruption like other methods, and miners are increasingly processing the waste before releasing it to avoid contaminating the water. It is used for ores like tin, coal, gold, and diamonds, and derives its name from the equipment used called ‘dredge’ (a kind of floating excavator).

These surface mining methods are considered to be more efficient and economical in extracting minerals as compared to most methods of underground mining. In fact, it can extract almost 90% of ore from a deposit. For this reason, surface mining is the most widely used method in North America. 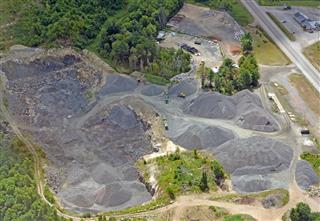 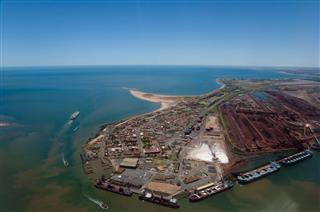