Sleet and Hail – What is the Difference?

Hail, being larger in size than sleet or ice pellets, is formed by the accumulation of layers of freezing water in the clouds. Sleet, however, is formed due to temperature difference in the atmosphere. Know more about these two forms of precipitation through this ScienceStruck article which gives a comparison between sleet and hail.

Home / Uncategorized / Sleet and Hail – What is the Difference? 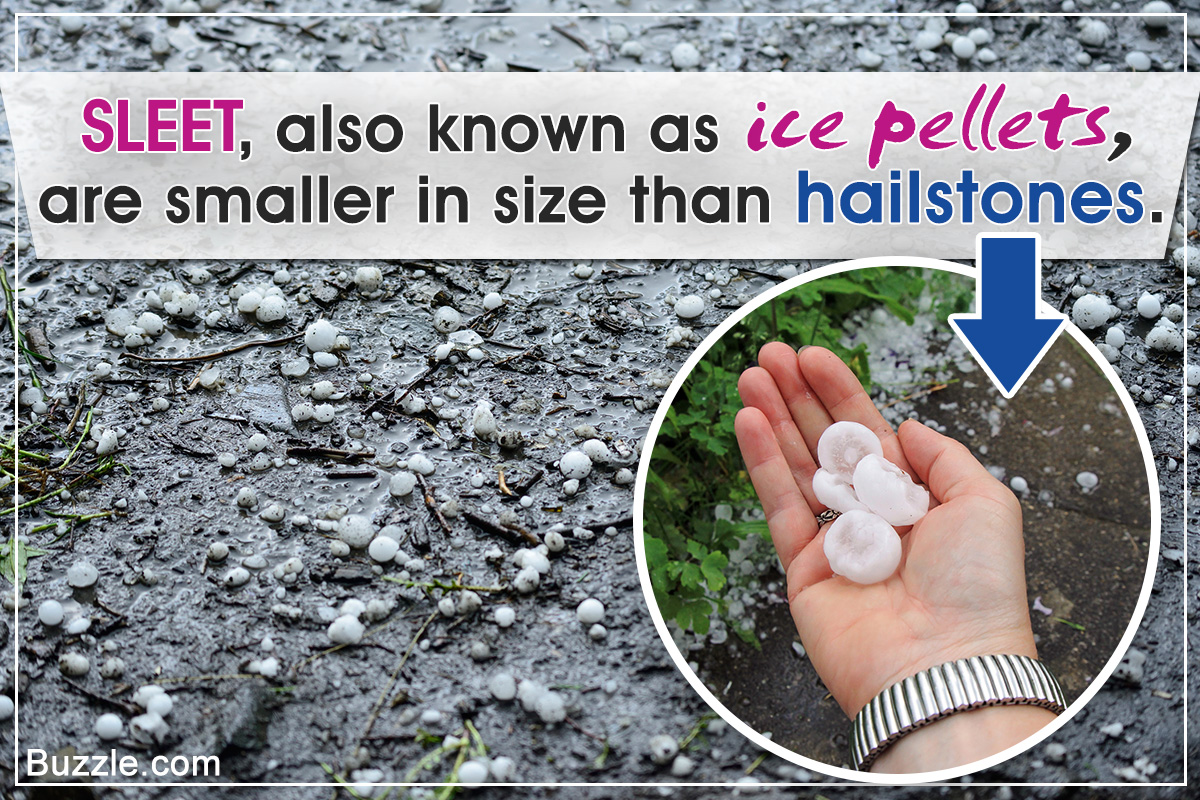 Hail, being larger in size than sleet or ice pellets, is formed by the accumulation of layers of freezing water in the clouds. Sleet, however, is formed due to temperature difference in the atmosphere. Know more about these two forms of precipitation through this ScienceStruck article which gives a comparison between sleet and hail.

Covering the states of Wyoming, Colorado, and Nebraska, this is the most hail-prone area in the United States.

We have all experienced what the weather is like when we say, “it’s raining cats and dogs”. Rain is common to some regions of the world all round the year due to the distinct climate type these areas have. An intense downpour can cause immense alteration to the city or village landscape. Heavy rainfall is associated with many conditions, including thunderstorms.

As we have learned in school, there are various forms of precipitation, rain being one of them. However, what interested our curious minds as kids were those little ice crystals, snowflakes, and such other marvels of nature. Sleet and hailstones are a part of this family too. Although we use the two words quite often, many times, we cannot tell the difference between them. Well, here is how they are different.

How is Sleet Formed?

These are tiny ice pellets formed in stratus clouds. Sleet is formed due to the atmospheric temperature difference. They fall through sub-freezing air, and refreeze into grain-shaped pieces. The snowflakes in the clouds begin to melt as they fall from the clouds, passing through a warm layer of air. They start freezing into solid pellet-shaped ice forms as they come down further nearing a cooler zone of air. So, sleet is basically refreezing of largely melted snowflakes. The translucent appearance of sleet is a result of accretion of raindrops through partial melting and refreezing of snowflakes.

How is Hail Formed?

Hailstones occur usually during the summer season, although they can be found in other seasons too. It is commonly observed to form within the cumulonimbus (thunderstorm) clouds. As seen in the diagram above, there are frequent updrafts of warm air at the base of the cloud. Hailstones are originally small ice particles or frozen raindrops. The tiny raindrops are carried along upwards with this updraft. These droplets grow bigger in size by accumulating layers of water on them, depending on the moisture in the clouds and how strong the updraft is. In robust clouds, they can circulate several times, forming a convection current. This continues until they become heavy, and the updraft force is weaker, after which they fall to the ground through a downdraft.

Hailstones have layers of frozen water built over them in concentric layers. On slicing them, these layers can be seen, also indicating towards the number of times it must have circulated in the cloud.