Understanding What is Cone of Depression and How it is Formed 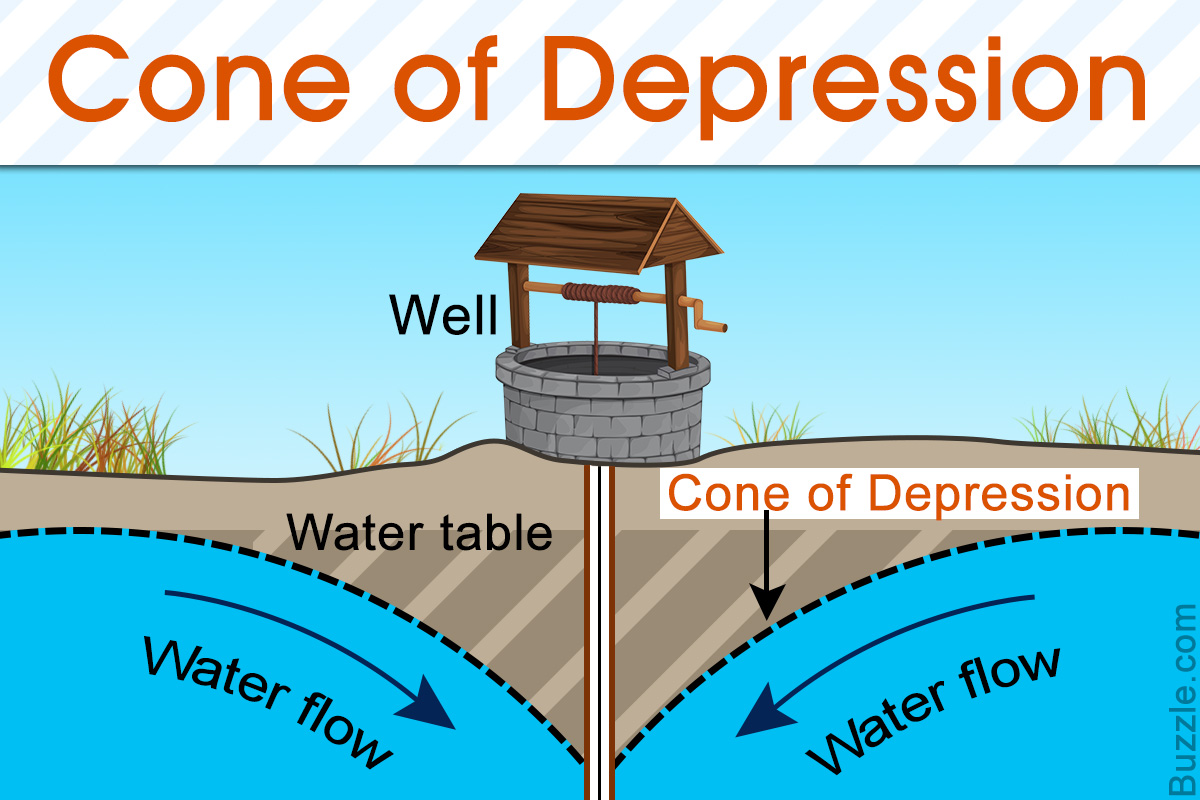 If the water is pumped out of an area, faster than it replenishes with natural groundwater, the level of water in the water table tends to drop leaving the well dry. It remains so till it fills up again with fresh groundwater.

You must have noticed the straw in your juice or milkshake. What happens when you suck out the drink with it, till no juice remains in the container? A dimple is formed around the straw. That is how a Cone of Depression is also formed.

Water that is found in empty spaces between gravels, soil particles, or cracks in rocks underground that are located in the zone of saturation within the underground aquifers is called groundwater. The cracks in rocks are formed due its subjection to stress and is mainly found in the form of joints, faults, etc. Groundwater is the second largest freshwater reservoir on Earth. The ‘zone of saturation’ occurs where the pores in the aquifer area are filled with water completely and is just beneath the water table. Aquifers are underground water bodies from which groundwater can be pumped out using a water well. This leads to the formation of a ‘cone of depression’.

Let us take a look at the formation of a cone of depression in detail.

A Cone of Depression is formed where the water table sinks at an exact point because of heavy pumping. Water is extracted out of the ground which leaves an airy space around the soil particles. If the pumping rate is faster than that of water that is flowing in, it results in the drawdown of the water table at the location of the pump.

The size and shape of the ‘cone’ depends on various factors such as size of the cone, material and thickness of the aquifer, and amount of water in the storage. The farther you go from the well, lesser is the amount of decline. The shape of the cone is affected when it intersects a larger water body such as a lake or stream. In this case, the cone of depression will not expand due to the supply of water from the lake or stream for that matter. On the contrary, if the cone comes in contact with any obstacle such as a bedrock, clay body, or edge of the aquifer, then it will decline to much greater depth.

If two cones of depression intersect or overlap each other, a ‘well interference’ is formed. The amount of water available to both the wells will be reduced.

It may also happen that the cone of depression stretches to the nearby water bodies such as lakes or streams. As a result, the water table below the stream or lake gets reduced, and water starts moving towards the groundwater aquifer near the well. This is known as ‘induced recharge’.

Aquifers are water bodies formed underground, and can occur at various depths. They are created when the water seeps in through the Earth’s surface and permeable rock till the time it reaches the impermeable rock. The surrounding rock or sand layer is then saturated by ground water forming an aquifer. There are two types of aquifers – confined and unconfined.

► A confined aquifer is a rock or a layer of sand or gravel having a confining layer (aquitard or aquiclude) above it because of which the movement of water is restricted to another aquifer. The water in confined aquifers is under high pressure because of the aquitard. The cone of depression in confined aquifer grows at a faster pace, but at a rate that diminishes gradually. The rate of replenishment is lesser. It takes a long time for confined aquifers to fill up as its only source is underground tributaries that travel long distances. The confined aquifers are less contaminated because they are protected by impermeable material.

► When the depletion of groundwater takes place, the landscape is highly affected. It lowers the water table and alters the direction of flow of groundwater.
► The water table may get infiltrated by contamination, and these contaminants may flow towards the point of discharge which could either be a stream or well.

► There is also the possibility of streams and other water bodies getting totally dried up due to continuous induced recharge which is a result of well pumping.
► The freshwater aquifers located near the coastlines may get intruded with saltwater which may make the water unusable.

So, this was all about cone of depression. Water pumping must be inspected at regular intervals. It mostly affects the lives of farmers as they require water to cultivate and grow crops. Thus, recharging of water is necessary before it gets pumped again.