What are Stromatolites and How Do They Form? 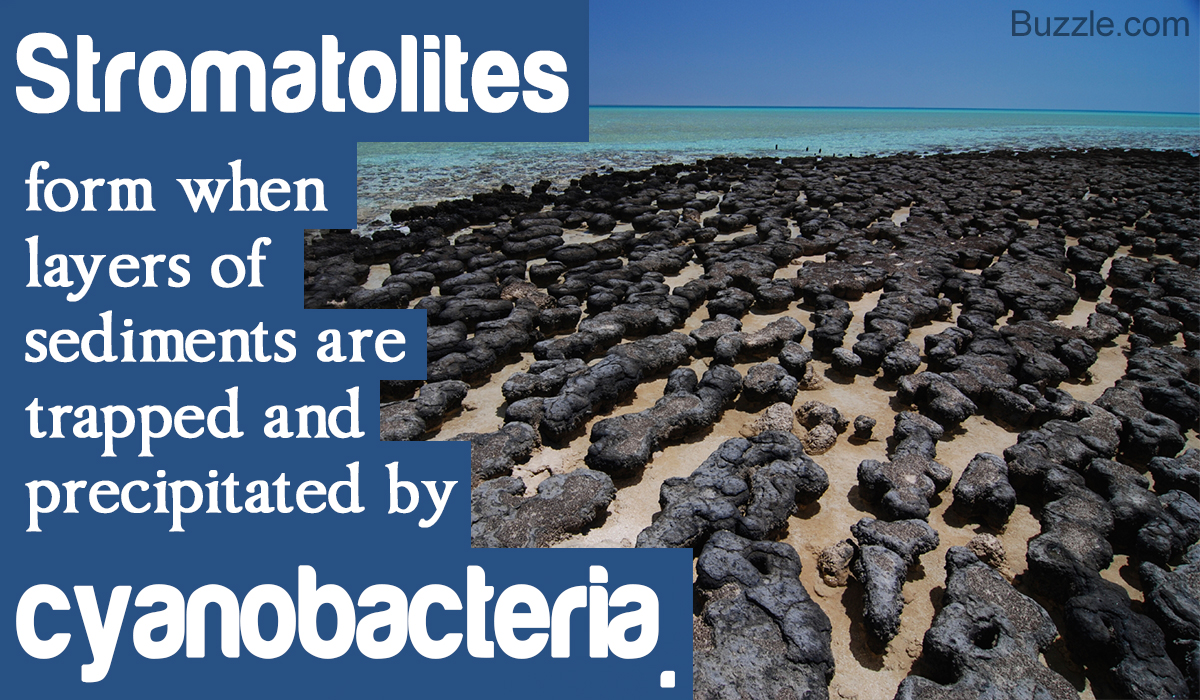 Modern stromatolites are sedimentary structures that are formed by cyanobacteria. ScienceStruck provides a few interesting stromatolites facts, along with information on the evolutionary significance of stromatolites.

Living stromatolites were first discovered in 1956, in the salty water of Hamelin Pool at Shark Bay, Western Australia.

The term ‘stromatolith’ was coined by Kolkowsky in 1908, and is derived from the Greek terms stroma and lithos. While the former means layer or bed, the latter means rock. Stromatolites are important because they are believed to be the evidence of early life. In fact, sedimentary structures that are around 3.5 billion years old are believed to be the oldest evidence of life on Earth.

Nora Noffke, a geobiologist at Old Dominion University, has recently found patterns on 3.5 billion-year-old stromatolites in the Pilbara region of Western Australia. These have patterns that are similar to the ones left by microbial mats (films formed by microorganisms) currently. While some geologists believe that these structures might have been formed by chemical processes, some refer to the similarities in their shape and other evidence to 2.8 billion-year-old stromatolites that are generally accepted as being biogenic. Basically, stromatolites are accretionary structures that are formed by colonies of cyanobacteria, which are believed to be responsible for addition of oxygen to the atmosphere. The following sections provide information on the evolutionary significance of stromatolites.

The age of Earth is estimated to be about 4.54 billion years. It is believed that cyanobacteria (earlier referred to as blue-green algae) played a big role in the evolutionary history of our planet. Scientists attribute the changes in the atmosphere during the Precambrian era to single-celled algae called cyanobacteria. It is believed that the Earth’s atmosphere had very little oxygen, which in turn is believed to have formed as a result of a reaction between sunlight and the water vapors from the volcanoes. During the Archaean period (time between 3,800 million years to 2,500 million years ago), the atmosphere consisted of ammonia, methane, and other gases. Scientists believe that cyanobacteria living in the seas were responsible for releasing oxygen in the environment through the process of photosynthesis. They took carbon dioxide and water to produce carbohydrates, and in the process, they released oxygen into the atmosphere. Thus, cyanobacteria are believed to be the first organisms that used water instead of hydrogen sulfide or other compounds for fixing carbon dioxide. 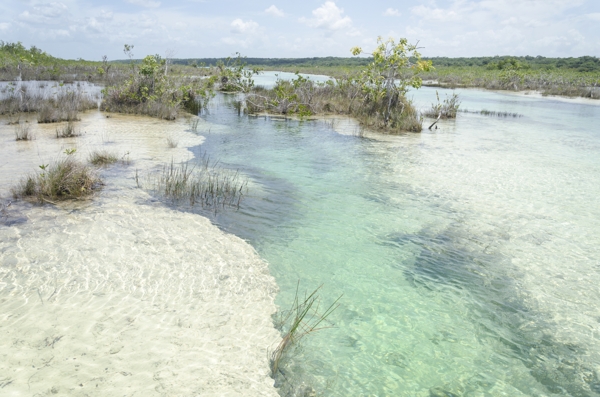 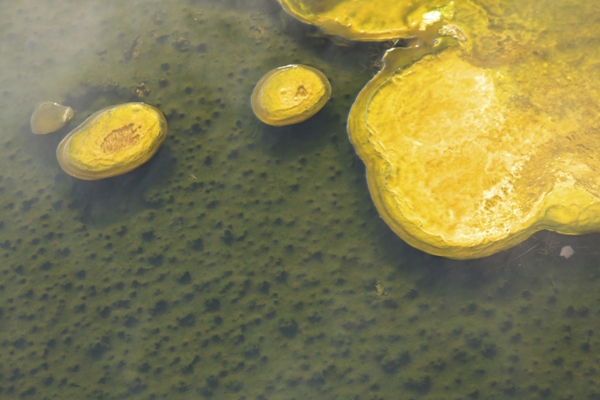 Cyanobacteria released oxygen as a byproduct of the photosynthesis. Thereafter, oxygen combined with iron to form iron oxide in banded iron formations. During Palaeoproterozoic era, free oxygen escaped into the atmosphere. It continued to increase during the Palaeozoic era (544 million to about 230 million years ago), thereby paving way to the evolution of other life forms. From the Archean period, stromatolites continued to form and diversify until the middle Riphean period, after which they began to decline. The decline continued during the Proterozoic and the Phanerozoic eon. Scientists believe that the decline in their numbers could be due to the increase in the number of grazing metazoans, multicellular animals, and sediment disturbance by metazoans.

Thus, the importance of stromatolites can be attributed to the fact that they provide invaluable information about the history of life on Earth in the very early stages. Moreover, they point towards the role of microbes in shaping the environment and evolutionary history of Earth. Precambrian fossils are very rare, and stromatolites are considered to be the oldest fossils. A scientific breakthrough came in the form of the discovery of living stromatolites in the Shark Bay in Western Australia. 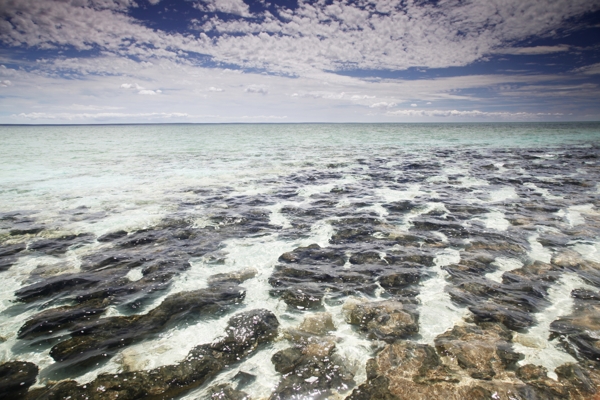 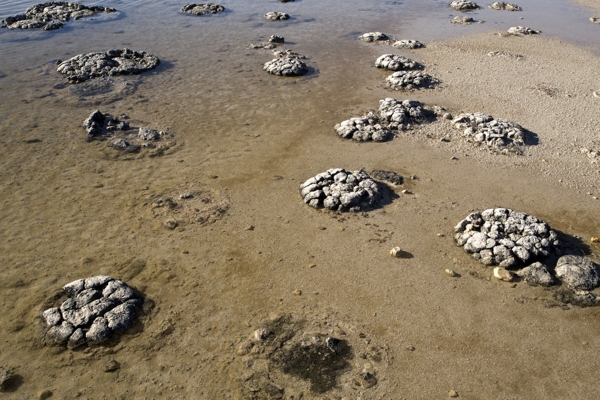 It is believed that modern living stromatolites exist because the colonies of bacteria grow in shallow waters. Here, evaporation results in extremely saline pools of seawater, where organisms that could graze on stromatolites cannot survive. For instance, a bank of silt called the Faure Sill cuts off the Hamelin Pool in Western Australia from the main ocean. This prevents the fresh sea water from entering Hamelin Pool, thereby maintaining very high salinity. This in turn restricts the type of sea life that can exist in the pool. It is likely that other types of life like corals may displace the stromatolites, if the Sill is breached due to rising sea levels. 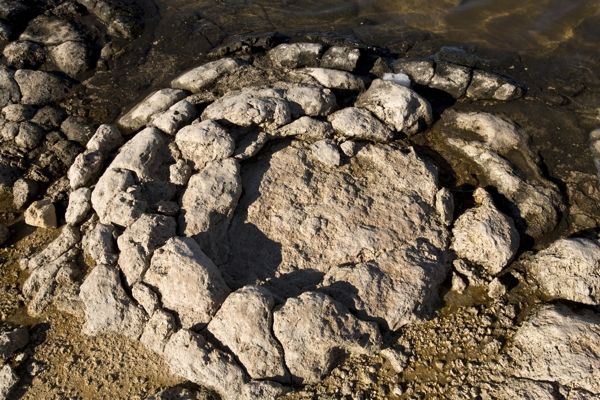 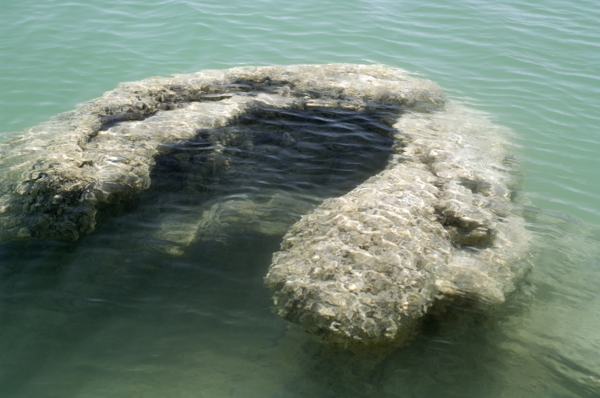 Simply put, stromatolites can be referred to as laminated mounds, domes, cones, or columns of limestone. Dating back to more than 3 billion years, stromatolites are the oldest known fossils. These are of great importance to geologists and paleontologist as they provide evidence of early life.

A stromatolite is produced by cyanobacteria. It is an accretionary, sedimentary structure that forms when the mucilage or the sticky coating on the microbial mat of the cyanobacteria traps and binds sediments. As mentioned earlier, cyanobacteria are capable of performing photosynthesis. They remove carbon dioxide in the surrounding water, thereby leading to the precipitation of calcium carbonate or limestone. Cyanobacteria then recolonize the sedimentary platform, over which another layer of sediment and limestone forms. This process continues to take place in a cyclic manner, thereby leading to the formation of rock-like stromatolites that grow upward. With time, these can reach several meters in height and thickness.

✦ The process of formation of stromatolites is very slow. It must be noted that these structures form very slowly, with the rate of mere ½ mm in a year. 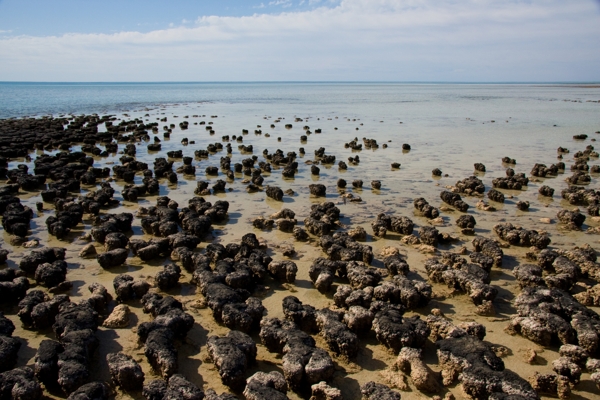 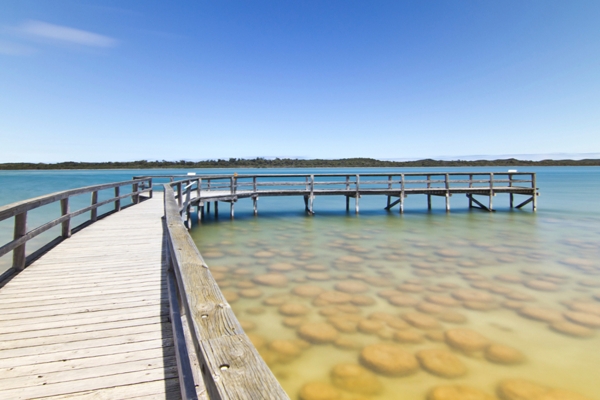 ✦ Thrombolites are a type of microbialite, which is a general term for structures that are formed due to the action of microbial communities. They are closely related to stromatolites. However, they differ in the way they form. Stromatolites are formed by deposition of sediments in layers, whereas thrombolites have a clotted laminae. 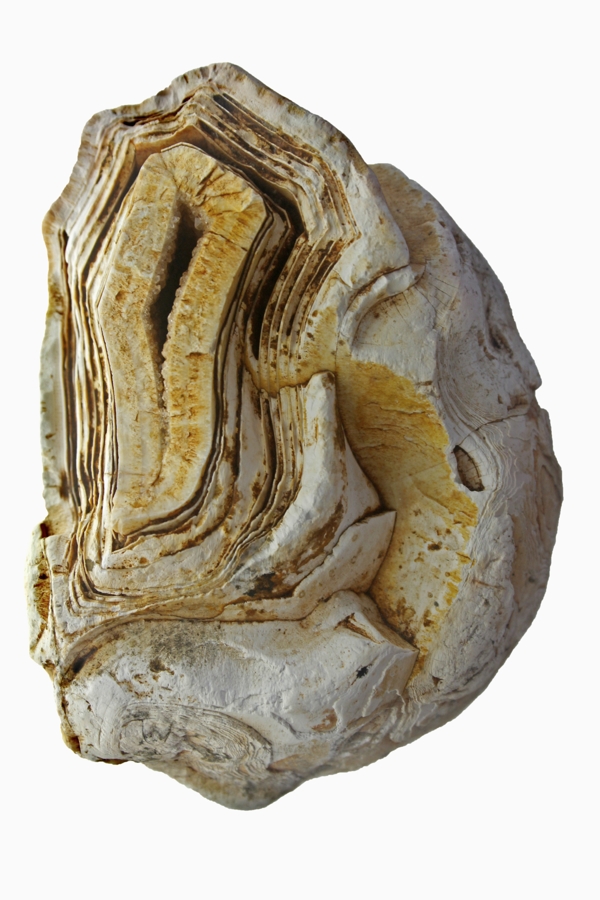 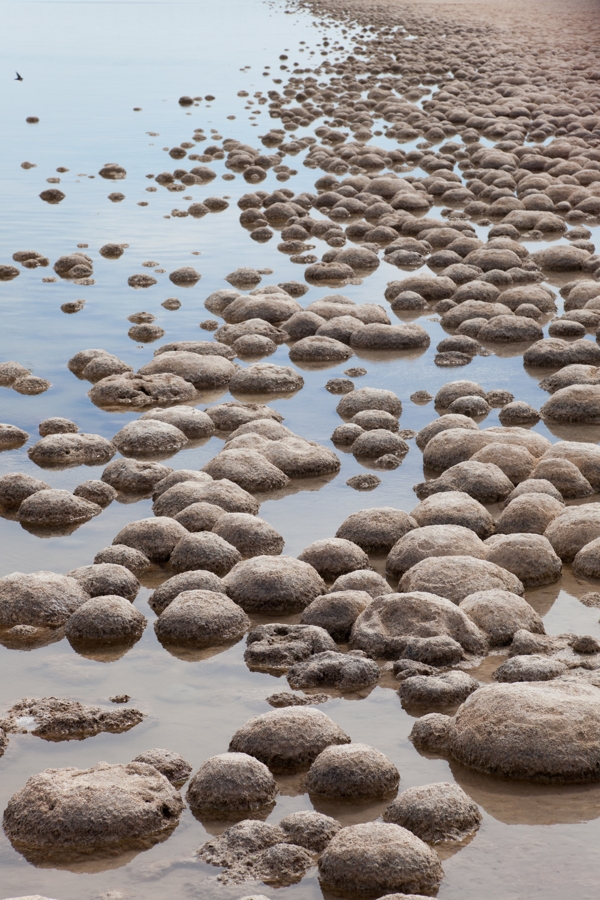 ✦ Thrombolites can be found in several lakes around the world. In Western Australia, they can be found in Lake Thetis, Pink Lake, Lake Preston, Lake Clifton, and Lake Richmond. 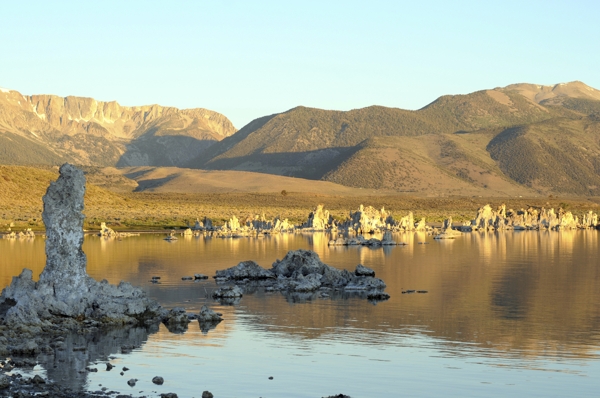 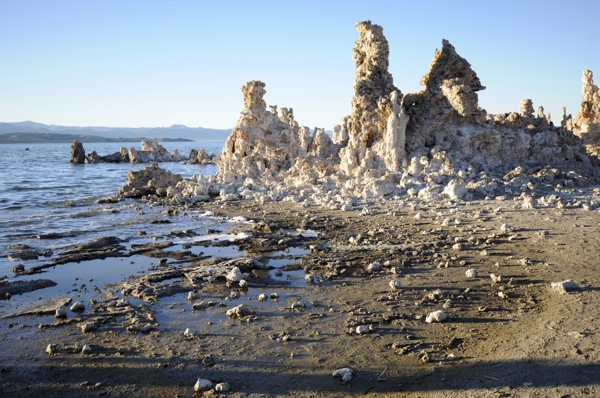 ✦ Besides Shark Bay in Western Australia, stromatolites have also been found in Bahamas, Yellowstone National Park in the United States, lakes in Antarctica, and Western Indian Ocean.

✦ Stromatolites need sun to perform photosynthesis, which is why they are found in shallow waters.

✦ Listed in the World Heritage, Shark Bay’s stromatolites are modern living stromatolites that are 2000 to 3000 years old. The cyanobacteria that are responsible for creating them are believed to be similar to life forms that were present on our planet around 3.5 billion years ago.

✦ Around 50 species of cyanobacteria are found at the Hamelin Pool site alone.

✦ Fossils of the stromatolites that are 3.5 billion years old have been found near Marble Bar in the Pilbara region of Western Australia.

On a concluding note, many geologists are of the opinion that cellular life may have existed millions of years before the signs appear in the fossil record, and believe that the study of rock-like structures called stromatolites and microbially-induced sedimentary structures might help them find traces or origins of cellular life or early life forms on Earth. This might provide useful insights on the evolutionary history of our planet.