Titanium is one of the most widely used metals today. It forms tough alloys and is quite versatile in its applications. It's the metal of choice for the 'space age'. In this article, I provide a complete physical and chemical profile of Titanium element, with information about its extraction processes and applications. 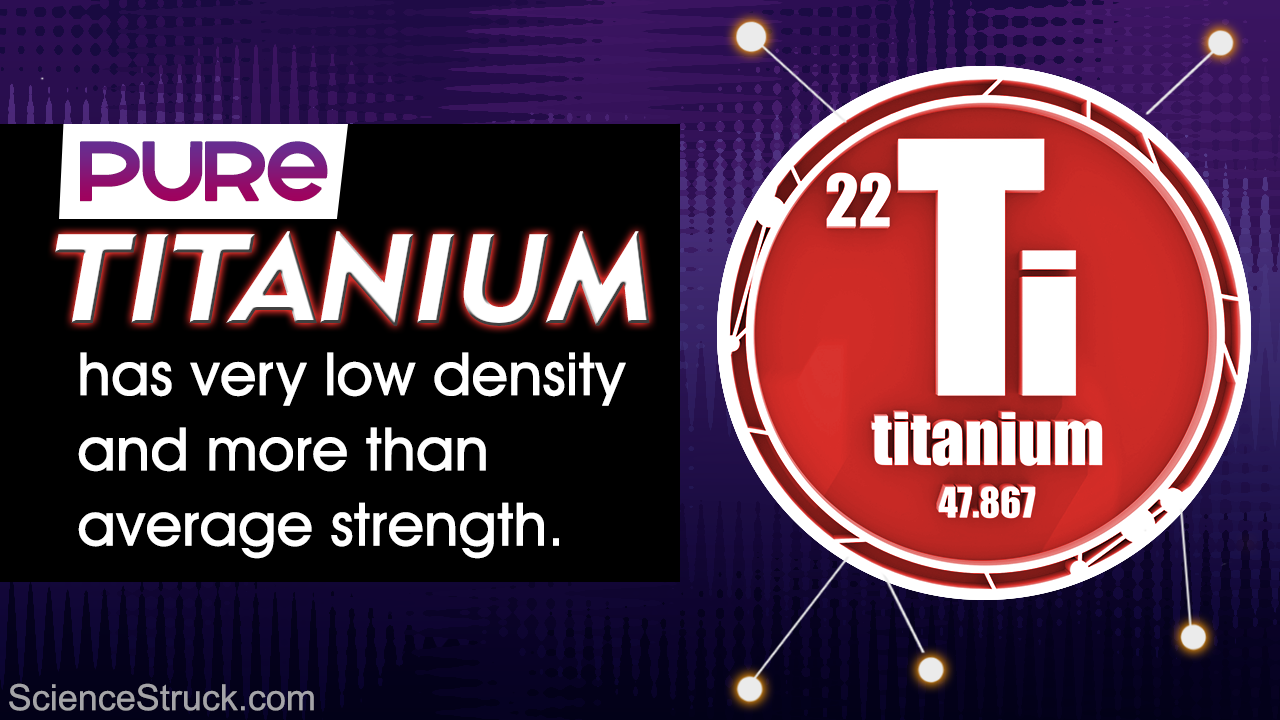 Titanium is one of the most widely used metals today. It forms tough alloys and is quite versatile in its applications. It’s the metal of choice for the ‘space age’. In this article, I provide a complete physical and chemical profile of Titanium element, with information about its extraction processes and applications.

From orthopedic implants, building of air crafts and space vehicles to designer jewelry, titanium finds multiple uses, making it one of the most versatile metals used by man.

The discovery of titanium was made by an English priest and mineralogist William Gregor in 1791, while studying mineral deposits in the Manaccan Valley in Cornwall, England. He realized that he had isolated the residue of an entirely new metal from a steel gray mineral called ‘ilmenite’ known as crystalline form of iron titanium oxide (FeTi O3) now. He named it after the place of discovery as, ‘Manaccanite’.

Still this name did not stick because in the same year a German chemist Martin Heinrich Klaproth, discovered the same metal element from another mineral called ‘rutile’, now known to be mainly composed of titanium dioxide (TiO2). He named the new metal more imaginatively as ‘titanium’ after the famous ‘Titans’ in Greek mythology. As Klaproth was a popular, well-established chemist who was well connected, the name stuck, although Gregory is credited for discovering it first.

Still nobody was able to isolate a high purity sample of titanium in the 18th or 19th century. In the following years, this feat was achieved by some resourceful chemists.

Flash forward to 1910, Matthew Hunter, a Kiwi chemist refined and modified a chemical process developed in 1887 by Nilsen and Pettersen using sodium which extracted 99.9% pure metallic titanium that had the property of ductility. This made titanium available for a range of applications for the first time.

The first step in the Hunter process, as it is known today, consists of heating a mixture of chlorine, coke and rutile which gives a product consisting of titanium tetrachloride (TiCl4) and carbon dioxide at a very high temperature:

The second step is heating the titanium tetrachloride from the previous step with liquid sodium (Na) in a high temperature-resistant steel enclosure at 700 – 800 degree Celsius. In this process known as ‘reduction’, reduction of titanium tetrachloride by sodium gives 99.9% pure metallic titanium along with salt (NaCl) :

Although the Hunter process was the pioneering process of titanium extraction, it was replaced by the Kroll process later. It was developed by William Kroll in 1940 during World War II. The first step in the process consists of reducing either of the titanium minerals ilmenite or rutile by coke at a temperature of 1000 degree Celsius. The mixture so formed is then subjected to chlorine and titanium tetrachloride. Then through the process of fractional distillation many of the excess components of the mineral are removed. In the last stage TiCl4 is reduced by magnesium in liquid form at a temperature of 800 – 850 degree Celsius again in a high temperature-resistant steel enclosure to give titanium:

Further processing is required to extract titanium from the mixture of resultant products. This can be achieved through vacuum distillation. The metal acquired through this process is highly pure and ductile. This is the established commercial process all over the world now.

Titanium (Ti) is a fundamental chemical element with atomic number 22 and average atomic weight 47.9gm. Its electronic configuration is 1s2 2s2 2p6 3s2 3p6 4s2 3d2 with 2 unpaired electrons in the d-shell. In its pure form, titanium is a silver-colored transition metal. The melting point and the boiling point of this metal are 1668° Celsius and 3287° Celsius respectively.

Pure titanium has very low density (4.506 gm/cm3 at room temperature) compared to other metals and has more than average strength. Its most important property is that it’s highly resistant to corrosion compared to other metals. It can withstand dilute sulfuric and hydrochloric acids, sea water, chlorine compounds as well as gaseous chlorine and organic acids without corrosion. Titanium forms strong, light alloys with aluminum, iron, vanadium and molybdenum. Compared to steel, titanium is comparable in strength yet it is 45% lighter!

It is found in the Earth’s crust in the form of compounds and is ranked ninth in terms of abundance. Modern studies have revealed that Earth and the moon share geological history. Not surprisingly, rock samples from the moon collected through the Apollo missions show an abundance of titanium compounds. In future, the Moon may be mined for this metal. Traces of titanium compounds have also been found in the Sun’s composition through spectroscopic studies. In fact such compounds are found in most of the dwarf M-type stars like the Sun. Traces of this metal are also found in the human body and plants but it is non-reactive and therefore plays no biological role. This very property and its ductility makes it an ideal element for building surgical implants.

Titanium has an average atomic weight because it has 5 isotopes with atomic weights ranging from 46 to 50, out of which 48Ti is the most abundant. It is known to be dimorphic, which means it occurs in two crystalline forms. Below 880 degree Celsius, it exists in the hexagonal alpha form and above that temperature it exists in the cubic beta form. It is one of the costliest metals today.

Owing to its high tensile strength, low density and light weight, titanium is the premier choice of metal for aicrafts, space vehicles and missile programs. Its ability to form high strength alloys with other metals enhances its usability in making surgical instruments and prosthetics. Due to its versatility, the uses of Titanium are many.

It is used in the manufacturing of steel and finds usage in the form of numerous alloys, after being mixed with other metals like iron, vanadium, manganese and copper. It is most widely used in the form of Titanium dioxide (TiO2), used as a pigment in plastic, paints, paper and as a skin protecting agent in sunscreens. Other than that, Titanium is used in manufacturing of fireworks, sports equipment, jewelry, bicycles, automobiles, firearms, laptops and many other goods.

Due to its anti-corrosive properties in sea water, it is used for crucial parts of new age distillation plants built on the seashore. Titanium dioxide is widely used in paints used by artists and also in wall paints. Titanium paint reflects infra red radiation as it does not fall into its absorption band. This property is exploited to create heat resistant shields for buildings.

Thus titanium justifies its naming after the Titans as it makes building of robust space vehicles possible. It makes mankind’s leap into outer space possible!