Plate tectonics describes the large-scale motions of the Earth's lithosphere. It covers the concepts of continental drifting, which were developed during the 20th century by Alfred Wegener. Read this ScienceStruck article to gain more information about this concept.

Plate tectonics describes the large-scale motions of the Earth’s lithosphere. It covers the concepts of continental drifting, which were developed during the 20th century by Alfred Wegener. Read this ScienceStruck article to gain more information about this concept.

The Himalayas is the tallest and youngest mountain range in the world, and the average height of this range is rising about 5 mm every year, as the Indian plate gets subducted under the Tibetan Plateau of the Eurasian plate at the rate of about 20 mm per year.

The theory of plate tectonics explains the relative movement of crustal plates that are juxtaposed with each other to form an interlocking pattern of plate boundaries, oceanic trenches, mountain ranges, etc. The Earth surface has continuously been changing ever since it was formed, especially regarding the geomorphological and geological phenomena. The main reason for these changes is the formation of crust and complex interaction with the underlying mantle of our planet.

About 225 million years ago, all the major continents were combined into just one giant super-continent called the Pangaea. Due to the heat built up underneath it, Pangaea began to rift and split apart. The area between these new sub-continents was filled by oceans. They continued to drift away from each other, and finally reached the positions which they currently occupy. Even today, the continents are still moving. This concept is called the Theory of Continental Drifting, and along with the hypothesis of Sea Floor Spreading, plate tectonics can be explained easily. The drifting of continents can be understood by the following illustration, which shows the changing continent positions since 250 million years ago till present. 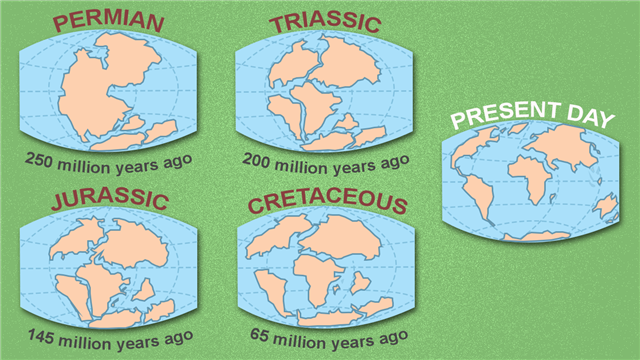 The outermost part of the Earth’s interior consists of two layers: the lithosphere and the asthenosphere. The latter lies below the former, having comparatively low viscosity, shear strength, and can flow like a semi-liquid material on the geographical times scales. The lithosphere consists of the crust and the rigid uppermost part of the mantle. It is broken up into tectonic plates, which move in relation to one another along the three types of plate boundaries: convergent boundaries, divergent boundaries, and transform faults. The lateral movement of the plates takes place at the speed of 50 to 100 mm annually. Earthquakes, volcano formation, mountain formation or orogenic activity, and oceanic trench formation normally occur along these boundaries.

The Earth’s crust is divided into two parts: continental crust and oceanic crust, based on the typical composition, density, and mode of formation of both the types. On this basis, tectonic plates are classified as:

They form the portions that comprise the landmass of our planet, and are characterized by large thickness (averaging 35 km) than the oceanic plates. The density of these plates is less than that of the oceanic ones due to high content of silica and aluminum (felsic in nature). They are mainly generated due to volcanic and tectonic activity that is restricted to land masses.

These plates are formed due to convection activity of mantle magma, and subsequent eruption at the mid-oceanic ridges. The average thickness of oceanic plates is quite less than that of the continental plates (about 5 km), whereas, they are more dense than the latter ones due to less content of silica and high content of magnesium (mafic in nature). These plates mainly constitute the oceanic basin parts of our planet.

These markings are characterized by the relative motion of the plates with respect to each other, along with relation to a few parameters of surface phenomenon.

They are also known as active and destructive margins, and are formed when two plates slide or converge towards each other, resulting in their impact. This phenomenon occurs due to the process of sea floor spreading, wherein the plates are pushed onwards by the steadily formed new oceanic crust. These boundaries are of three types:

When two continental tectonic plates collide with each other, one less denser plate undergoes subduction, but pushes or makes the other plate rise above, resulting in the formation of mountain ranges. For example, the Himalayas in Asia and Alps in Europe have been formed due to the collision of the Indian plate with the Eurasian plate, and the collision of the African plate with the Eurasian plate, respectively.

It is characterized by the subduction of an oceanic plate when it collides with a continental plate, resulting in the formation of coastal mountain ranges, and in some cases, the occurrence of volcanic arcs. The classic examples of such collisions are the Aleutian mountains, and the Ring of Fire (chain of volcanoes in South-east Asia). Subduction takes place as the oceanic plate is more dense than the continental one.

When two such plates collide, they both get subducted and consumed in the deep mantle zones. In most cases, island arcs, submarine volcanoes, and oceanic trenches are formed during the collision of two oceanic plates. The most popular example is that of the Mariana Trench, which is located in the Western Pacific Ocean, and is formed due to the collision of the Pacific plate and the Philippine plate.

They are also known as constructive boundaries or margins, and they occur when two plates move in the opposite directions, resulting in the formation of new crustal material from the molten magma, which originates from the deep mantle portions. These boundaries are formed in both continental and oceanic regions of the Earth, and create rifts and ridges in this process.

Constructive boundaries in oceans are formed at mid-oceanic ridge systems, wherein new magma formed in the mantle erupts at openings or vents. The young crust thus starts spreading in opposite directions, resulting in the movement of tectonic plates away from each other. This phenomenon is called sea floor spreading, and is explained by the Convection Cell Hypothesis, which tells us about the circulation of mantle magma due to convection currents. When rocks are heated near the Earth’s core, their density decreases as compared to the rocks present near the crustal portions. The heated rocks rise upwards in the form of magma, and the cooler rocks are pushed down, aided by the forces of subduction near the destructive margins. This causes the circulation of magmatic material to the mid-oceanic ridges, and the subsequent development of convection currents in the mantle. As the sea floor spreads due to driving forces of newly generated crust, the older portions of the lithosphere are subducted at convergent boundaries. These rocks reach the interior portions of the Earth, where they are again melted, and the convection process continues.

A major example of such a boundary is the Great Rift Valley of East Africa where a triple junction is present. In this case, rifting is taking place, leading to the movement of continental crust in three different directions, and new crust is being formed as landmass regions. Another widely studied example is that of the Mid-Atlantic Oceanic Ridge System, which is one of the longest constructive boundaries on our planet. New magma is being continuously generated at this system, and it passes through the nation of Iceland, where the North American and the Eurasian plates move in the opposite directions, i.e., towards east and west, respectively. The land mass of Iceland is increasing on both sides, and it predicted in future that the land will separate out due to the ridge activity.

The origin of these boundaries at triple junctions is linked with the phenomenon known as hotspots. According to this phenomenon, large convective cells bring huge quantities of hot asthenospheric material near the surface, and the kinetic energy generated is sufficient to break apart the lithosphere. The hotspot may have started the Mid-Atlantic Ridge system. The divergent boundaries are symbolized in the oceanic lithosphere by rifts of the oceanic ridge system, including the East Pacific Rise, the Mid-Atlantic Ridge, and in the continental lithosphere by rift valleys, such as the Great Rift Valley in East Africa.

They are also known as conservative boundaries, and occur when the tectonic plates slide or grind past each other along the transform faults. This motion is either sinistral (left side toward the observer) or dextral (right side toward the observer). These faults are often present in a zig-zag pattern on the sea floor. According to the scientist John Tuzo Wilson, the plates can’t glide past each other due to friction. Rather, stress is built up between the plates, which gradually reaches a level that exceeds the strain. Depending upon the rheology of the rock, the strain can be accumulative or instantaneous in nature.

Earthquakes are a common phenomenon along the transform boundaries, and are caused due to the energy released by the instantaneous strain release. A popular example is that of the San Andreas Fault located in the western coast of North America. Here, the Pacific and the North American plates move relative to each other in a pattern, in which the Pacific plate is moving northwest with respect to the North America plate. Other examples of transform boundaries are the Alpine Fault in New Zealand, the North Anatolian Fault in Turkey, and the Mendocino Fracture Zone located in the offshore northern Californian region.

The basic parameters of plate tectonics that have been described above can be represented with the help of the following illustration, which also shows sea floor spreading: 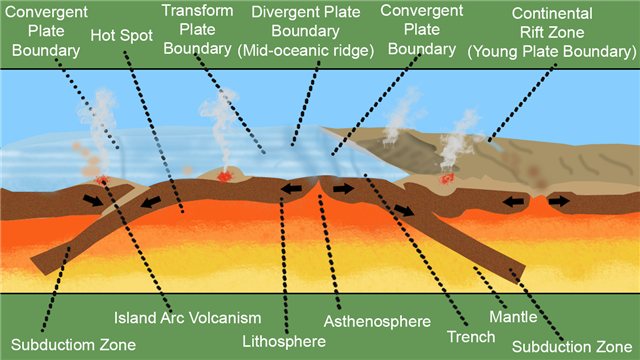 The lithosphere of our planet is divided into primary and secondary tectonic plates, which have been illustrated, as well as mentioned below:

In spite of extensive studies and research since the last century, knowledge about plate tectonics has been limited, since it is not possible to study the entire process in a practical manner. This theory is very useful for reconstructing past positions of the continents along with their movement directions. As our planet has been witnessing a cyclic formation and breaking up of new continents, plate tectonics becomes useful for studying the mechanics involved in sea floor spreading hypothesis, which has been occurring since millions of years.