Pulleys are categorized as a type of simple machine consisting of a grooved wheel and a rope or cable. These devices help us to lift heavy loads in an effective manner, as well suspend various objects in the air (for example: a flag). Read this ScienceStruck article to know more about the various types of pulley systems and their working mechanisms.

Pulleys are categorized as a type of simple machine consisting of a grooved wheel and a rope or cable. These devices help us to lift heavy loads in an effective manner, as well suspend various objects in the air (for example: a flag). Read this ScienceStruck article to know more about the various types of pulley systems and their working mechanisms.

According to a legend, the block and tackle pulley system and its associated machinery is believed to be invented by Archimedes in Syracuse, around 250 BCE. He is said to have moved a warship full of soldiers with such a movable system of pulleys in ancient Mesopotamia.

A simple machine is a mechanical device that makes it easier for us to lift or move a load by changing the direction or increasing the magnitude of the force applied on a load. Such a device uses a single force that is applied, by which work is done against a single load. A number of simple machines when put together form a complex machine, which further reduces the effort that is required to do ‘work’ on a load (for example: lifting heavy objects with a crane). Such devices are not only present in the mechanical form, but are also a part of the body of humans and other animals too (for example: our limbs act as levers). In our everyday life, we make use of these simple devices without realizing it consciously. The following paragraphs will make you understand the concept of an important type of these machines, which is called a pulley.

A pulley is a simple machine that consists of a wheel with a groove, running along its circumference between the rims of the wheel. A rope or cable passes through the groove, which is attached to the load on one end, whereas effort is applied to perform work at the other end. These systems effectively reduce the effort that has to be applied by the person lifting the weight. Many modern pulleys are now operated on electricity.

Say, you need to lift a load weighing 100 kg with the help of a Class 1 pulley system. In this case, the effort that is applied at one end of the rope is equivalent to the force required to lift 100 kg. In case of the Class 2 pulley system, the weight is divided equally between minimum two strands, and hence, the effort to be applied is equivalent to the force needed to do work to lift a load of 50 kg.

The pulley system works on the basis of transfer of reduction of the load weight, which is experienced by the person applying the effort. The load is tied at one end of the rope or cable that has resistance, while the other end is characterized by the presence of effort. Modern pulley systems are more or less compound machines in combination with wheel and pulley and other simple machine systems.

The Actual Mechanical Advantage (AMA) is defined as the ratio of the output force to input force that is exerted on the pulleys. This is calculated under conditions when the resistance offered by friction acts on the entire system. This type of advantage is represented as:

Now, the ratio of these forces is directly proportional to the distance traveled by the load and effort end of the rope, respectively. Also, the load is equally divided among the different strands of the rope, and the effort is equal to the tension carried by the entire rope or cable part of the system.

Thus, the load and effort can be represented as:

where, ‘n’ stands for number of rope strands, and ‘T’ represents tensional forces.

In the above-mentioned equation, the forces of friction are acting on the working mechanism, and hence, the Ideal Mechanical Advantage (IMA) can be calculated. IMA is defined as the ratio of number of strands or parts of the rope to the tensional forces acting on the rope. This type of advantage is represented as:

Thus, the Ideal Mechanical Advantage is equal to the number of rope strands, only in the case of movable and compound pulley systems.

In this design, the axle of the pulley is fixed at one place, while the load is tied to the other end of the rope. Force or effort is applied on the other end to lift the load. A fixed pulley only changes the direction of the force applied to do work on the load. The mechanical advantage in this system is equal to 1, which means that the force applied on one end of the rope is the same as that being applied on the load to lift it.

In this type, the axle of the pulley is free to move in space. While one end of the load is attached to some fixed object, force is applied at the other end. Hence, due to application of effort, the load gets lifted or drifted as the pulley rolls over the length of the rope. The mechanical advantage of a movable pulley is equal to 2, which means that the force applied on the free end of the pulley doubles the force being applied on the load.

This type consists of a combination of fixed and movable systems. A compound pulley has a mechanical advantage greater than 2. A good example is the Block and Tackle system. A block refers to the case that contains the pulleys side by side and also holds the axle in place. A tackle is the rope that is used with these pulleys to lift loads. In this system, the mechanical advantage is greater than 2. Another example of this type is illustrated, wherein a third pulley is added between the fixed and movable pulleys. This helps to reduce the effort needed to be applied while lifting the load.

In modern times, the pulley system is used to lift loads to significant heights. Compound pulleys are used by cranes to lift loads. A simple pulley is used in a flagpole to hoist a flag, whereas block and tackle machines are used on ships to lift heavy sails. Sometimes, one block and tackle system is connected to another one to increase the mechanical advantage by manifolds. This pulley system is also used mainly when heavy loads have to be lifted; for example: on shipyards and docks, large ships, industrial machinery, etc. Other examples where such simple machines are used are curtain blinds, adjustable clotheslines, and fishing rods.

Ancient people throwing vines over branches of trees to lift weights is not a difficult scenario for us to imagine. Pulleys have been modified, and newer technologies regarding the same are still being developed to help us lift heavier loads. The invention of simple machines in ancient times is a prime reason of the extensive industrial revolution that took place a few centuries ago, wherein various kinds of such devices were combined effectively to develop new machinery. 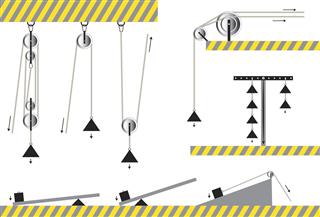 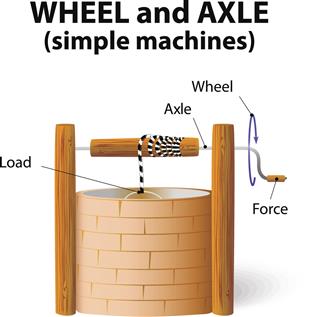 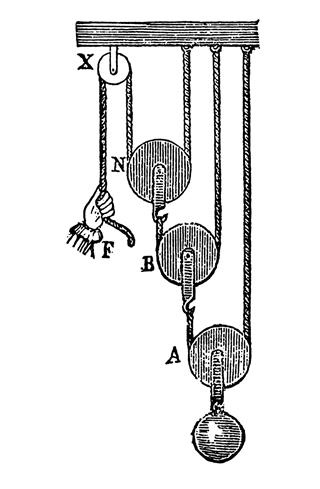 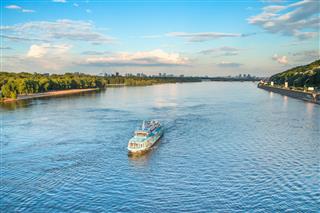