Similarities and Differences Between Voltaic Cells and Electrolytic Cells 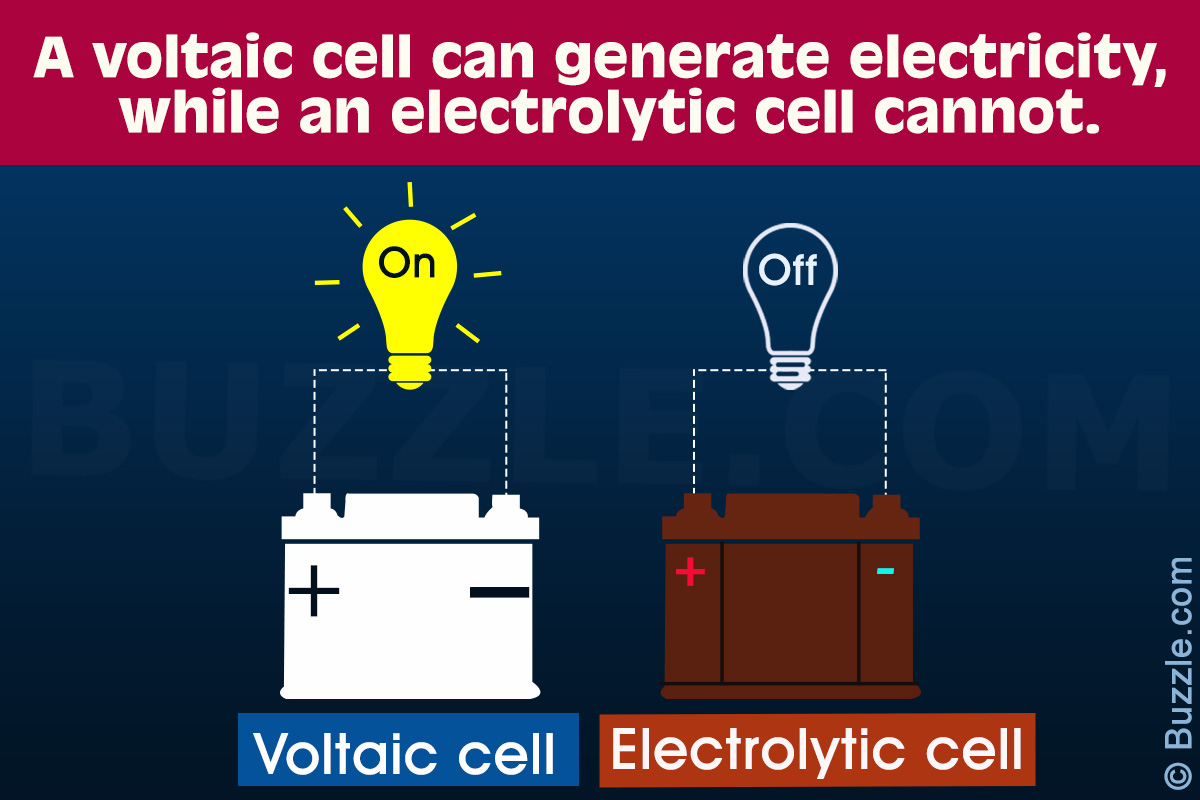 A voltaic cell is also known as a galvanic cell. These names have been derived from Alessandro Volta and Luigi Galvini respectively, both of whom pioneered this technology.

Before attempting to study an ocean, one must first study the local pond. The same is true in the world of electrochemistry. To understand the working of large batteries, we first need to analyze and study the working of a single cell.

First brought to use in the late 1800s, the electric cell has evolved to being more than just a component within a battery. Today, along with powering our mobile phones, laptops, cars, inverters, etc., electrochemical cells have also found applications in various specialized processes, such as electrolysis and electroplating.

At the grass root level, cells can be split into two basic types – the voltaic cell and the electrolytic cell. The former gives the basis of working of modern-day batteries, while the latter helps us understand how cells can be used in specialized applications. In the following sections, we examine both these types of cells in greater detail.

A voltaic cell is an example of what is known as an electrochemical cell. It gets this classification owing to the fact that, within it, a chemical reaction takes place which results in the generation of proportional electrical energy. The voltaic cell forms the basis on which modern-day batteries are built.

The following is the working principle of a basic voltaic cell.

When two dissimilar metal plates are simultaneously immersed in an electrolytic solution, the one having higher reactivity with it, chemically combines with the electrolyte. This causes it to dissolve in it as positively charged ions, leaving behind free electrons on the plate. Therefore, that metal plate becomes negatively charged.

The other metal plate which has a lower reactivity, will tend to attract these positive ions present in the electrolyte which will get deposited on its surface, making it positively charged.

Now, if externally, a conductor is connected between these two metal plates, a current starts flowing through it. This current is directly proportional to the amount of positive and negative charge present on the respective metal plates.

The above diagram shows the main parts used to construct a simple voltaic cell. A sulfuric acid (H2SO4) solution taken in a container acts as the electrolyte for the reaction. Two metal electrodes are immersed in this solution. One electrode is made of zinc (Zn), while the other is made of copper (Cu). An external conductor is connected between these two electrodes, as shown in the diagram.

Of the two metals used, zinc has a higher reactivity with sulfuric acid. Therefore, it gets slowly dissolved in the electrolyte solution in the form of positive zinc ions, leaving behind free electrons on the zinc electrode. This reaction continues spontaneously until an equilibrium is established between the number of zinc ions that are formed and the number of zinc ions returning to the electrode. At this point, the voltage on the zinc electrode is (- 0.62V). The following equation represents this reaction.

The positive zinc ions break the molecular bond between hydrogen and sulfur in (H2SO4) and react with the negative SO4 ions of the electrolyte. This results in the formation of ZnSO4. The following is the chemical reaction that takes place at the zinc electrode.

The positively charged hydrogen ions which are freed from the sulfuric acid get dispersed in the electrolytic solution. When they reach the copper electrode they react with it, extracting electrons to form hydrogen gas which bubbles out of the solution. This reaction is shown below.

The following is its working principle.

An electrolytic cell is used to perform electrolysis. The suffix -lysis in Greek means to split up. The term electrolysis, therefore, is the process in which a compound is split up into its constituent elements with the help of electrical energy.

In electrolytic cells, the compound to be split is converted to liquid and used as an electrolyte. Two inert electrodes are immersed in this electrolyte solution, and externally, a potential difference is created between them using an emf source. This causes one electrode to become positively charged, while the other one becomes negatively charged.

Due to this emf, the elements of the liquid electrolyte get split into positive and negative ions, with the positively charged ions getting attracted and deposited on the negative electrodes, while the negative ions getting deposited on the positively charged electrode. Thus, electrolysis, or splitting up of a compound using electrical energy is achieved. This is the basic working principle of an electrolytic cell.

In our example, the compound to be split is plain salt (NaCl). It is first liquefied by heating it till the salt crystals melt. This liquid is then pored in an electrolysis container. Two inert electrodes are immersed in this liquid NaCl solution, and using a battery, potential difference is applied between them, as shown in the figure above.

When the (Na+) ions come in contact with the negatively charged electrode, they acquire electrons from it and convert to sodium (Na) metal, which is deposited on the electrode. This is represented by the following equation.

Similarly, when (Cl–) ions reach the positively charged electrode, they lose electrons and get oxidized to chlorine gas, which bubbles out of the solution. This is shown in the equation below.

Thus effectively, the compound NaCl gets split into its constituent elements of Na and Cl in an electrolytic cell.

2) Direction of Electron Flow
In both these cells, electrons flow from the anode to the cathode through the externally connected conductor.

In voltaic cells, the two electrodes need to be made out of two different metals, with one being more reactive to the electrolytic compound as compared to the other. Typically, in electrolytic cells, both the electrodes used are made of the same inert metal (graphite or platinum).

Thus, the voltaic cell and the electrolytic cell are two different kinds of electrochemical cells that are used for distinct and separate applications. Each of them represents a basic type, through which many modern-day batteries and other electrochemical applications have been designed and built.