A Simple Explanation of Haber-Bosch Process for Ammonia Production

Ammonia is an important compound, essential to man for a variety of diverse uses. It is used as a fertilizer, cleaning agent, antimicrobial agent, etc. Such a diverse applicability, has caused large demand for its production. The development of the Haber-Bosch process for ammonia production has made it possible to meet this demand. Learn all about this process in the following ScienceStruck post. 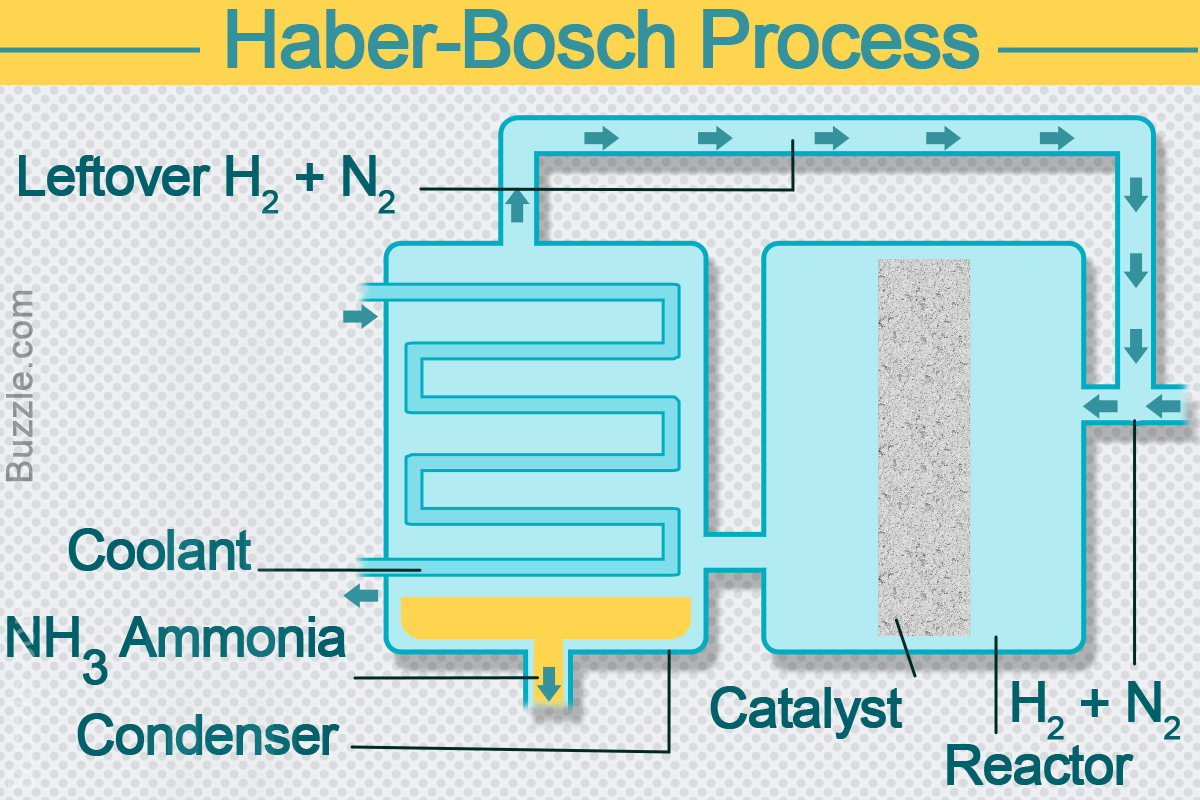 Ammonia is an important compound, essential to man for a variety of diverse uses. It is used as a fertilizer, cleaning agent, antimicrobial agent, etc. Such a diverse applicability, has caused large demand for its production. The development of the Haber-Bosch process for ammonia production has made it possible to meet this demand. Learn all about this process in the following ScienceStruck post.

The first polyatomic molecule to be discovered in interstellar space was ammonia.

Nitrogen is a vital nutrient for biological processes. Despite its abundance in the atmosphere, it is nutritionally unavailable. The reason being, it is in an inorganic form that cannot be assimilated and utilized by organisms. Hence, this nitrogen must be converted into a form (ammonia) that makes it nutritionally available to plants and animals.

Natural fixation of nitrogen occurs due to the action of certain nitrogen-fixing bacteria, but the amount of organic nitrogen generated is too low. The process is gradual and slow. In order to speed up this fixation and to produce a large quantity of the bioavailable form, various methods for producing ammonia were developed. However, most of these methods failed due to high capital investments, expensive chemicals, and non-translation into a large-scale production. The widely prevalent method of industrial ammonia production was the energy-inefficient Birkeland-Eyde process.

This was resolved by the development of the Haber process by the German chemist, Fritz Haber, in the early 20th century. It involved the practical use of atmospheric hydrogen and nitrogen to produce ammonia. The success of this process led to it being purchased by the German chemical company BASF (Badashe Analine und Soda Fabrik). Carl Bosch was tasked with scaling up the process to an industrial production. The efforts of both these men were recognized in the form of Nobel prizes that were awarded to them in 1918 and 1931, respectively. This also led to the process being called the Haber-Bosch process.

❖ The primary requirements for the production of ammonia are hydrogen (H2) and nitrogen (N2). H2 was initially obtained by electrolyzing water, thus, splitting the water molecule into its components – hydrogen and oxygen. In recent times, this method has been replaced by the use of methane as a source. Methane is easily acquired from natural gas, and requires very less external energy to produce hydrogen.

❖ The other substrate, nitrogen, is obtained by carrying out fractional distillation of air. This is possible due to the cooling of air to -190 °C, at which point, nitrogen converts into a liquid, and can be separated from the mixture of other gases in the air.

❖ The hydrogen and nitrogen are then, introduced into a chamber containing iron particles or lined internally with iron, and a pressure of 15 – 25 MPa at a temperature of 300 – 500 °C is applied to the gases. These conditions cause the gases to react and produce ammonia, and the following reaction occurs:

❖ Since the number of reactant molecules is higher than the number of product molecules, according to Le Chatelier’s principle of chemical equilibrium, there would be a continuous decline in the yield as the reaction progresses. High pressure conditions are applied to overcome this effect. This pressure on the reaction mixture causes a shift in the equilibrium of the reaction toward the products, in effect, leading to a continuous, high production of ammonia. The rationale behind this occurrence is that, as the pressure increases, the system adjusts itself to accommodate this increase, and hence, produces more product, in a bid to reduce the total number of molecules contained in the system.

High temperature conditions are required in order to break the strong triple bond of the nitrogen molecules. But, due to the exothermic nature of the reaction, the steady increase in heat over a period of time causes the gradual decomposition of ammonia. To prevent this from happening, the iron in the system is coupled with K2O, CaO, and Al2O3 in order to catalyze the reaction and increase its speed. The iron adsorbs the nitrogen and hydrogen onto its surface, hence, lowering the amount of critical energy required to cleave the covalent bonds of nitrogen. The adsorption also facilitates the easy availability of hydrogen molecules for nitrogen atoms to combine with. The reactions occur as follows:

❖ The hot mixture of gases is then passed through a condenser. Since ammonia condenses easily as compared to nitrogen and hydrogen, the liquefied ammonia is collected and removed, and the leftover nitrogen and hydrogen gases are re-introduced into the reactor. Thus pressure is maintained, and there is no loss or wastage of reactants. This recycling of the raw materials allows a 97% conversion of initial reactants into ammonia, which is, then, used to produce a variety of products.

Presently, about 454 million tons of nitrogen fertilizers are produced using the Haber-Bosch process. They are extensively used to increase crop yields. This extremely high usage has led to almost 80% of the nitrogen in the human body having its origin in the Haber process. The unchecked, heavy use of artificially fixed nitrogen is slowly proving to be a bane for biological beings and their habitats.