The Working Principle, Types, And Applications of a Manometer

Home / Uncategorized / The Working Principle, Types, And Applications of a Manometer 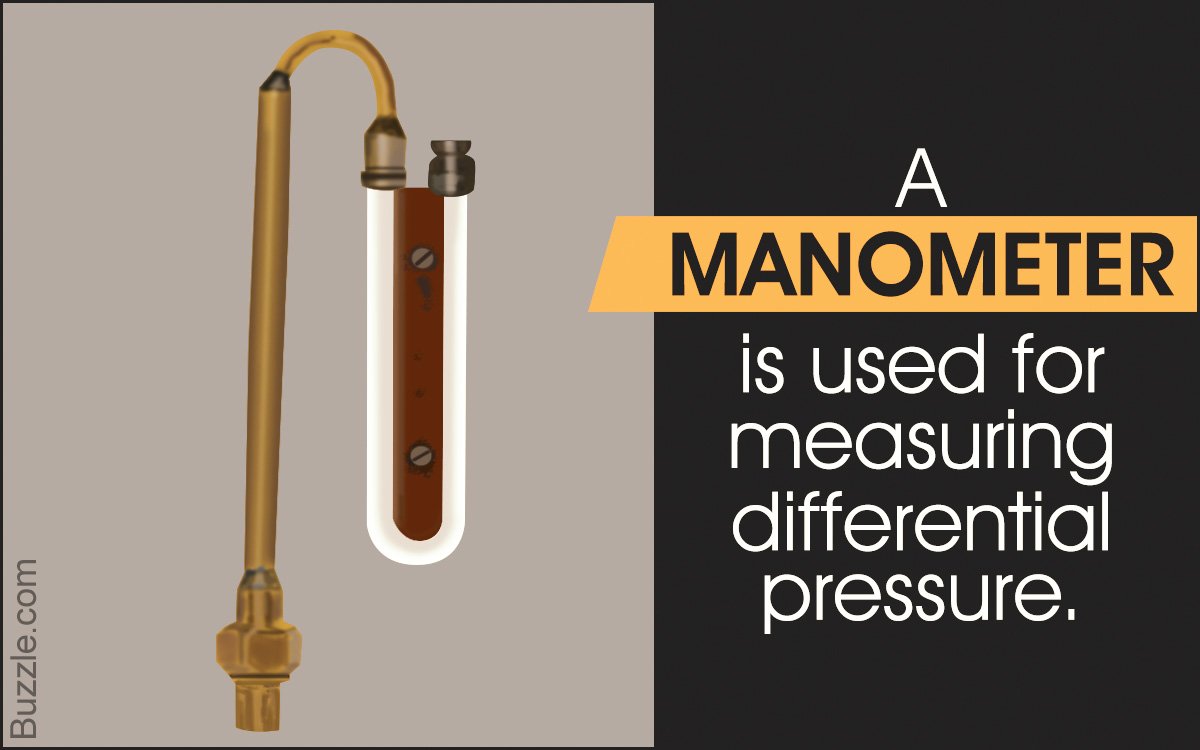 The term manometer is derived from the ancient Greek words ‘manós’, meaning thin or rare, and ‘métron’. A manometer works on the principle of hydrostatic equilibrium and is used for measuring the pressure (static pressure) exerted by a still liquid or gas. Hydrostatic equilibrium states that the pressure at any point in a fluid at rest is equal, and its value is just the weight of the overlying fluid. In its simplest form, a manometer is a U-shaped tube consisting of an incompressible fluid like water or mercury. It is inexpensive and does not need calibration.

where, ρ = density of the liquid used in manometer

Manometers are generally classified into simple manometers and differential manometers. Let us take a closer look at the each individual type and their working principle in detail.

It consists of a glass tube bent like the letter ‘U’. In this type of manometer, balancing a column of liquid is done by another column of same or other liquid. One end of the U-tube is attached to the point where pressure is to be measured, while the other end is open to atmospheric pressure. The pressure at point B in the figure is given by:

As shown in the figure, the well area is larger than the area of the tube, denoted by A. The rise in liquid level in the tube is considered while that in the well is ignored. If p1 and p2 are absolute pressures applied as shown in figure:

It is similar to a well type manometer in construction. The only difference being that the vertical column limb is inclined at an angle θ. Inclined manometers are used for accurate measurement of small pressure.

In the adjoining figure, the two points A and B are in liquids having different specific gravity. Also, A and B are at different levels. A liquid which is denser than the two fluids is used in the U tube, which is immiscible with the other fluids. Let the pressure at point A be PA and that at point B be PB.

This type of manometer is used when the difference between the densities of the two liquids is small. Similar to the previous type, A and B are points at different levels with liquids having different specific gravity. It consists of a glass tube shaped like an inverted letter ‘U’ and is similar to two piezometers connected end to end. Air is present at the center of the two limbs. As the two points in consideration are at different pressures, the liquid rises in the two limbs. Air or mercury is used as the manometric fluid. If PA is the pressure at point A and PB is the pressure at point B;

A digital manometer uses a microprocessor and pressure transducer to sense slight changes in pressure. It gives the pressure readout on a digital screen. It measures differential pressure across two inputs. An analog/digital output in proportion to the instantaneous pressure can be obtained.

Digital manometers report positive, negative, or differential measurements between pressures. With the integration of an anemometer, flow readings can also be recorded on a digital manometer.

A manometer is one of the earliest and simplest devices used for measurement of gauge pressure and differential pressures. As mentioned in this discourse, it has myriad uses in different fields.