Here is an article which would throw some light upon the working and types of rain gauges. 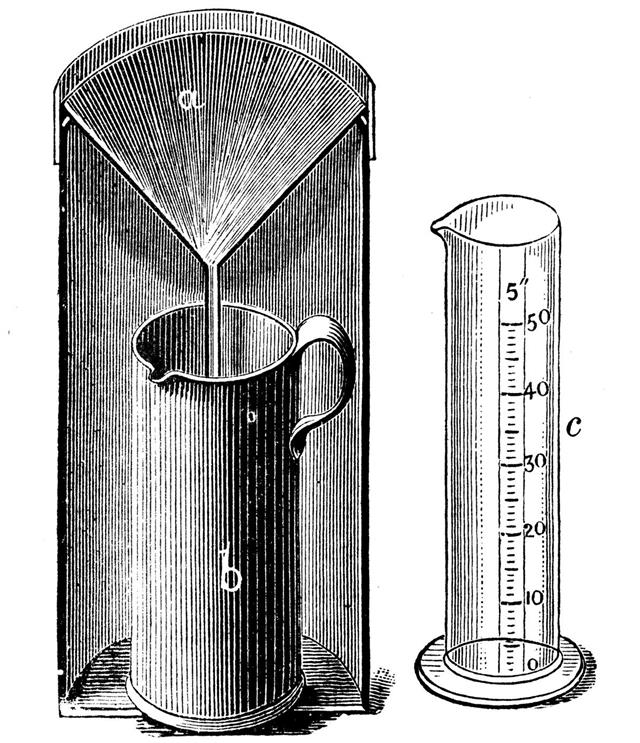 Meteorologists and hydrologists use a rain gauge to measure the amount of rainfall in a span of time. It is also known as a pluviometer, cup, or a udometer. It measures rainfall in millimeters, but represents it in inches at times. There are various kinds of rain gauges, which are as simple as a funnel and tube arrangement, and as complex as a measuring cylinder attached to a computer gauge.

Tipping Bucket Rain Gauge: This kind can assure if the rainfall was heavy, moderate, or light. This arrangement has a funnel, through which the rainwater enters and is poured into a bucket, which tips after a considerable amount of water is collected in it. Now when the bucket tips, it activates the gauge by switching on a magnetic reed switch. Thus, a complete electrical circuit is created after regular intervals, which gives us the measure of rainfall within that particular time span. Tipping bucket rain gauges are also available in simpler forms, wherein, there is a see-saw arrangement, and every time the bucket tips, there is a marker pen that marks the water level on a graph.

Standard Rain Gauge: This has a funnel that is attached to a measuring cylinder, which is graduated, and there is also a large container which is for the extra water to be collected, thus also taking into account the water which has overflowed from the graduated measuring cylinder. This measuring gauge gives better precision as compared to a tipping bucket rain gauge.

There are other kinds of rain gauges, like the optical rain gauge and weighing precipitation gauge, but then, the latter can be used to measure all kinds of precipitation. The former uses a much more sophisticated form of measuring, like a laser diode and phototransistor detector, wherein, the dispersion of light is used as a basic concept. There are decorative rain gauges as well, like a frog garden stake rain gauge, or a hummingbird garden stake rain gauge, which are beautiful to look at, and also go with the garden landscape.