Properties and Uses of a Bar Magnet

While magnets can be found in many types and forms, bar magnets are always rectangular in shape. In this article, we shall take a look at the specific characteristics and traits that are displayed by these magnets, and study the various applications for which they can be used.

Home / Uncategorized / Properties and Uses of a Bar Magnet

While magnets can be found in many types and forms, bar magnets are always rectangular in shape. In this article, we shall take a look at the specific characteristics and traits that are displayed by these magnets, and study the various applications for which they can be used.

Some animals like mollusks and pigeons have magnetic minerals such as magnetite in their body. It is believed that these animals use these minerals to align themselves with the Earth’s magnetic field, allowing them to navigate their surrounding area easily.

All substances which are capable of attracting ferric elements such as iron are called magnets. Bar magnets are rectangular, narrow objects that are made either of iron or steel composites or ferromagnetic materials which generate magnetic fields. These are the most commonly available variety of magnet shapes. All bar magnets have two poles, i.e., north and south poles. For identification purposes, the north pole is painted red, while the south pole is painted blue. However, in science laboratories, they are painted red all over, and the north pole is indicated with a white dot. Let’s look at a few traits and characteristics displayed by bar magnets.

Magnetic fields are the changes in energy inside a space. The magnetic field lines around a bar magnet have certain properties: 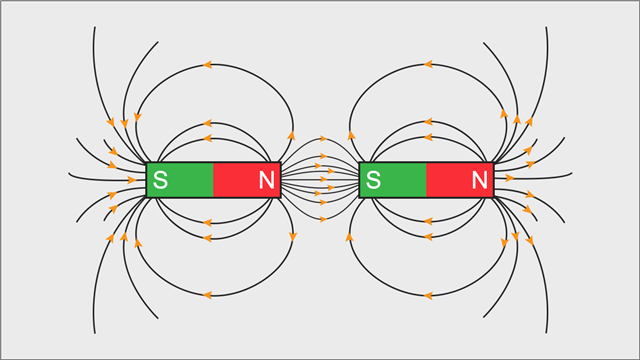 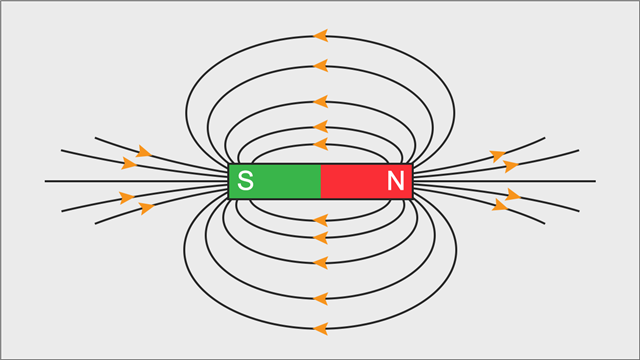 Magnetic Field Lines of Attraction Between Opposite Poles 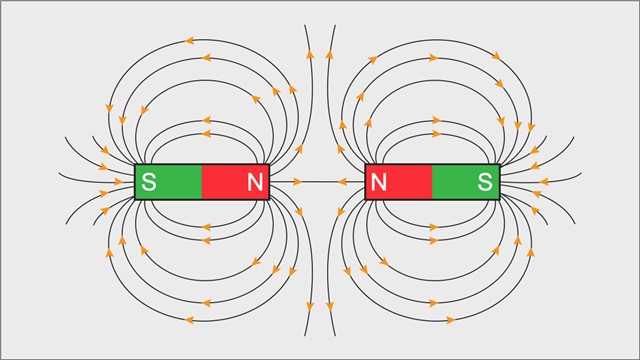 It is the basic law of magnetism that oppositely charged poles of magnets are attracted to each other, while similarly charged poles repel each other. This can be seen through the changes in magnetic field lines occurring, when a magnet is placed close to another. However, it is important to note that if a bar magnet is cut in half, both pieces will form separate magnets, and will have their own north and south poles. The magnetic field surrounding a bar magnet can be seen through a very simple experiment using iron filings, which we shall now learn about.

It can be seen that the iron filings align themselves with the lines of magnetic force. The lines show where the magnetic field leaves the magnet at one pole and reenters at the opposite pole along the length of the magnet. You will also notice that, although there are many poles all along the length of the magnet, most of them are concentrated towards the ends. It is important to note that, although the image shows the magnetic lines of force only in two dimensions, they are actually three-dimensional.

How are Electromagnets Different from Bar Magnets?

Although bar magnets and electromagnets show similar magnetic fields, and in some cases may also look similar to each other, there are a few prominent differences:

Our planet has a giant magnetic field, which extends thousands of miles into space, and protects us from harmful radioactive solar winds. The Earth’s magnetic field is very similar to that of a bar magnet. It has two poles?north and south?and lines of electromagnetic forces can be found running along its length in long loopy arcs from pole to pole. This magnetic field is thought to occur due to the thermal convection of molten metal which is continuously circulating deep within the Earth’s core, creating powerful electric currents.

Magnetic Field of the Earth

The magnetic poles of the Earth have reversed positions regularly in the past, and currently, the magnetic north pole is close to the geographical south pole. This position is estimated to reverse again, sometime within the next 10,000 years.