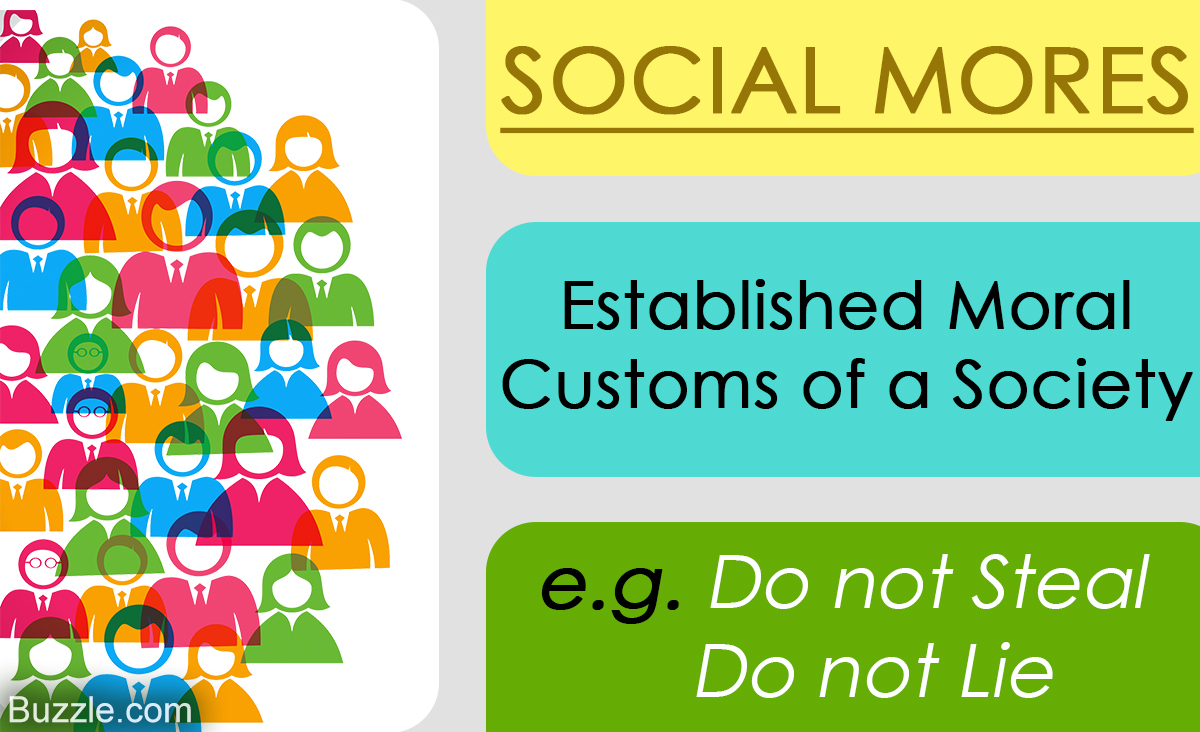 Social mores are nothing but customs that have been so deep-rooted in any society, that they dictate what is good and bad.

‘Mores’ are well established customs or folkways that dictate the moral conduct of the people in a society. They have moral significance as to decide what is right and wrong. However, it may include other informal norms too. They are well established customs. They’re different than folkways, whose violation is not met that strictly with. Some of them may even evoke a punishment from law. They’re different than the typical norms and etiquette, breaking of which is not considered that severe.

However, mores hold a lot of significance. Though the activity may not be unlawful, yet, in the eyes of society, it may hold something that brings disgrace or acts as a taboo. These norms dictate how members of the society behave. We of course, do not choose ‘mores’. They exist before we are even born, and we are simply expected to follow it. Of course, with time, there are bound to be changes brought in by the next generation, who might find a certain custom to be unacceptable.

For example, murder, stealing, lying, incest, etc., are considered against social mores in almost all cultures. In sociology, the study of ‘mores’ depicts the difference in various cultures, as far as their moral conduct is considered. What is considered acceptable in one culture may not be acceptable in some other culture. Thus, there are various social and cultural mores.

In simple terms ‘Mores’ can be defined as the different values, customs, and behaviors that are widely accepted by a particular group, culture, and the like.

In the Philippines, it is important in their custom to keep their face and respect upright. By any means, do not bring disgrace to the family. It is expected to go at lengths to be hospitable to guests.

In some monogamy cultures, polygamy is looked down upon as a disgrace. On the other hand, where polygamy is allowed, it is typically looked upon with pride to have multiple wives.

In some cultures, while eating food or performing any religious ritual, the right hand is considered auspicious, and the use of the left hand is not allowed.

Premarital sex is considered a taboo in India. Bigamy is disallowed too, except in some religions where it is officially allowed to do so. Inter-caste marriages were earlier looked down upon in India. However, lately it has become a common phenomenon.

Wearing an inappropriate dress to a place of worship is considered unacceptable in almost all cultures.

In Germany, it is considered inappropriate to be late when invited somewhere. They are extremely punctual, and take great pride in meticulous planning. Also, do not over-drink and behave obscenely in public.

In Singapore, there was a ban imposed by the government on the chewing of gum. This ban however, met with many revisions.

Different cultures have different norms when it comes to the cutting of hair. The Sikhs believe the hair to be sacred, and hence, do not allow both, men and women to cut their hair at any cost. Jewish men traditionally wear their side curls.

There are some countries that exhibit menstrual taboo. In some cultures, women are considered to be ‘unclean’ during this tenure, though some religions discard this notion. Even today, talking about it openly is considered unacceptable, even in many developed nations.

In some cultures, dead bodies are not cremated or buried, and instead left for scavengers.

There are dietary restrictions in some cultures. Cannibalism is prohibited and shunned by almost all cultures. Some religions restrict the consumption of certain foods.

As weird as it may sound, in China, a man should not wear a green hat, as it represents someone whose wife has been unfaithful to him. Also, gifting a clock is not considered good, since a clock represents time, and it indicates the end of relationships.

These examples portray the differences in various cultures. Before you visit any foreign land, it is advisable to do some homework and acquaint yourselves with their mores, beliefs, and norms, so that you do not invite problems or end up offending anyone.