The Structure, Chemical Formula, and Properties of Phosphoric Acid

Phosphoric acid is a commonly used chemical in a wide variety of applications. Here's more about the structure, chemical formula, and uses of phosphoric acid. 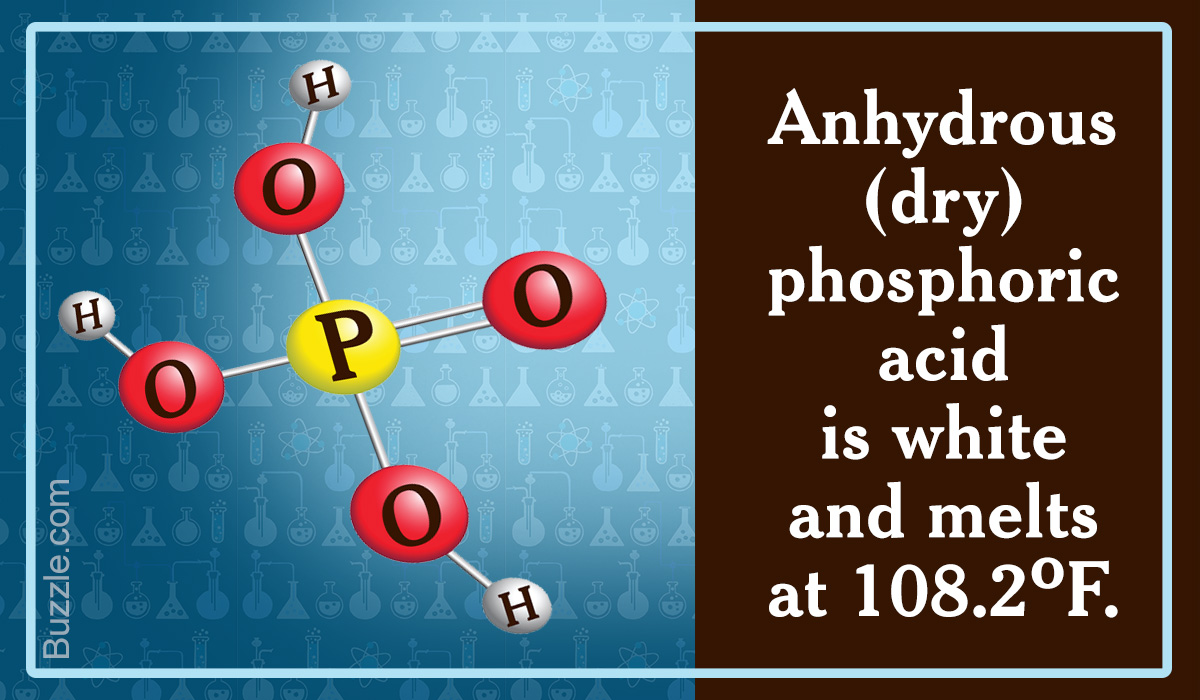 Phosphoric acid is a commonly used chemical in a wide variety of applications. Here’s more about the structure, chemical formula, and uses of phosphoric acid.

Along with carbonic acid, phosphoric acid is the inorganic acid most ingested by humans. It is used in various foods to add a sour flavor, including in some carbonated drinks.

Phosphoric acid is an inorganic or mineral acid with the chemical formula H3PO4. It is also known as orthophosphoric acid. Its IUPAC name is actually trihydroxidooxidophosphorus phosphoric acid, but thankfully, it is virtually never called that.

It can be formed by two processes; wet and thermal. The former is more common, and gives a less pure form of phosphoric acid that is acceptable for industrial uses. For applications in the food or cosmetic industry, purer forms are obtained by the thermal method. The most commonly employed reaction for the wet process is given below. The P2O5 content in the product of this method may vary from 25% to 70%.

The thermal process of procuring phosphoric acid consists of dissolving phosphorus pentoxide in dilute phosphroic acid. This gives a very pure form of phosphoric acid that can be used for more sensitive applications, but requires elemental white phosphorus, which can be hard to obtain.

Here’s a 2D version of the structure, for easier comprehension.

► Phosphoric acid is arguably the most used mineral acid. Most of it (about 90%) is used in the production of phosphate fertilizers.

► It is nontoxic in dilute form, and is thus used in numerous food products. It is primarily used in many carbonated drinks for its sour taste. It is widely available and cheaper to produce than organic substitutes such as citric or malic acid.

► It is used in dentistry to clean and roughen the surface of a tooth that is about to receive a filling.

► In one of the less widespread uses, it can also be used to remove and to a degree counteract corrosion. It reacts with iron oxides to form ferric phosphate. This can be easily scrubbed off or even left on the surface as a moderate protection against further corrosion.

► It is used as a pH-adjuster in some industries. Hydroponics employs phosphoric acid to lower the pH of the solution, with the dual benefit that phosphorus aids plant growth, particularly flowering. It is also used in cosmetic products to counteract alkaline components.