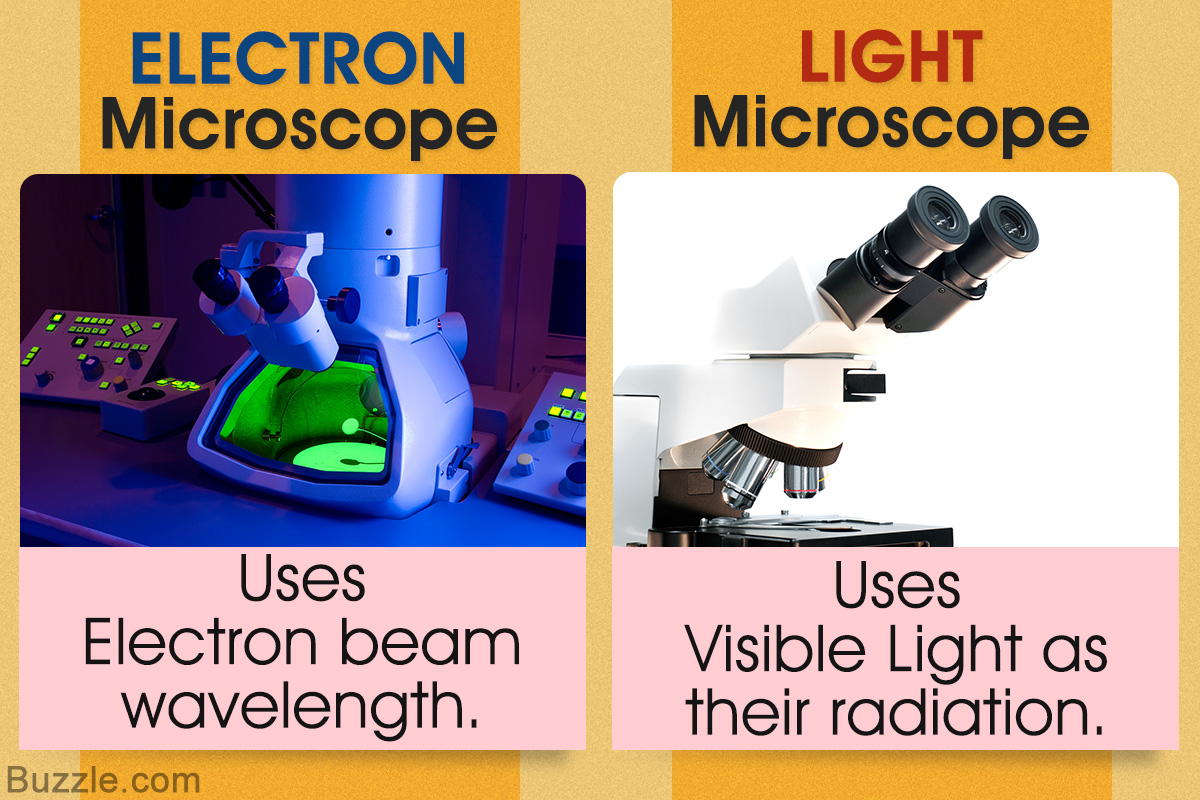 The microscope was invented by a Dutch lens-maker and scientist, Antonie van Leeuwenhoek. Since he invented the instrument without which the field of microbiology simply couldn’t have existed, he is known as the Father of Microbiology. He also observed various substances with his invention, and is thus considered the world’s first microbiologist.

Light microscopes were instrumental in the discovery of the cell and gave birth to the science of microbiology, while electron microscopes have allowed us to probe further into the depths of reality.

While both these instruments perform a similar job, there are notable differences between the two. Here’s a brief comparison between the light microscope and the electron microscope.

Here’s an illustration of the structure of each type of microscope.

Light microscopes, both simple and compound, use visible light as their radiation. This has a wavelength of about 400-700 nm (nanometer; 1 nanometer = 1 x 10-9 m). Light is focused with the help of glass lenses. Since the light is in the visible range, we can see images formed by a light microscope with naked eyes.

In contrast, the effective wavelength provided by a beam of electrons is less than 1 nm. This beam is focused with the help of electromagnets, employing the negative charge on electrons. Since we can’t ‘see’ a beam of electrons without severely damaging our eyes, the image in electron microscopes is produced on a electron-sensitive surface (often termed as ‘fluorescent screen’ in diagrams).

In both types, the radiation passing through the specimen is used to form an image. Light passing through a specimen in a light microscope scatters due to the properties of the various substances in the specimen. This light is then focused and magnified by the lenses in a compound microscope. Simple light microscopes, which are simply very strong magnifying lenses, use the reflection of light, but this type is not popular in academic and scientific circles.

On the other hand, electron microscopes form images based on the selective absorption of electrons by various parts of the specimen. The specimen lies above the fluorescent screen, and hence, the electrons that make a mark on the screen are the ones able to pass through the specimen. The parts that absorb the electrons prevent their passage to the screen, and thus appear dark. The parts that allow the electrons to pass through appear bright. The image is identified and labeled with the help of preexisting knowledge about the permeability of particular substances to electrons.

Light microscopes are typically capable of providing a resolution of up to 200 nm. In practical terms, this means that substances smaller than 200 nm won’t show up as a separate entity, and will be merged with a larger shape.

Since light microscopes use visible light, the images can be seen in the normal visible color range. Electron microscopes have nothing to do with the wavelength of the radiation (thus the phrase ‘effective wavelength’), and thus produce grayscale (B/W) images. These images are often given false colors for better clarity, especially if the image is going to be released to the public.

Due to their relatively simple mechanism, light microscopes (even compound microscopes) are very easy to carry and operate. As long as the lenses are protected, the apparatus is quite sturdy. In contrast, electron microscopes are relatively larger, and need a specialized high-power source. This makes them a bit cumbersome. They are also much more expensive than light microscopes.

As you can see, there are clear benefits and drawbacks to both types of microscopes. Due to their sturdy and practical nature, light microscopes are usually used in schools and colleges. Electron microscopes, which provide much more detail and magnification at a greater price, are used in high-end research facilities and laboratories.