The Paleozoic Era is one of the most important geological divisions of our planet’s geochronological timescale, as it marks the extensive evolution of life, along with the largest mass extinction. Read this ScienceStruck article to gain more information about this era on Earth, along with the respective major geological events and related facts.

The Beginning of Life

At the boundary between Ediacaran (last period of the Proterozoic Era) and Cambrian (first period of the Paleozoic Era), the Earth witnessed a sudden appearance of diversity in life. This is called the ‘Cambrian Explosion’, as the number of new species increased dramatically within a short geological timescale.

The term ‘Paleozoic’ has been derived from Greek words: palaiosmeaning ‘ancient’ and zoe meaning ‘life’. This era spans around 200 million years from about 542 to 252 M.A. (million years ago), and is the largest one in terms of time-span. It’s the first era of the Phanerozoic Eon, marking the beginning of life on our planet. Marine life, including reptiles, amphibians, and arthropods, evolved a lot, and consequently got introduced to the continental portions. The flora consisted of various kinds of gymnosperms, like coniferous trees and ferns, many of which are not seen in present times.

The Paleozoic Era can be divided into six periods: Cambrian, Ordovician, Silurian, Devonian, Carboniferous, and Permian. Each has its own particular characteristics, after which they have been named. The planet experienced a lot of changes regarding widely varying parameters, like climate, biodiversity, tectonic and other geological phenomena, evolution, etc. At the end of this era, the largest mass extinction ever took place, which wiped out most of the species of plants and animals on Earth. Although the extinction occurred on a larger scale in oceanic regions, new life did not emerge on land for almost thirty million years into the next era.

Interesting Facts and Major Events of the Paleozoic Era

The Paleozoic Era is divided into six periods, depending on various features like tectonic and geological environment, evolution of flora and fauna, climate, marine regressions and transgressions, etc. Refer to the following image to understand the timeline of this era, depending on the variation of characteristics across the periods.

Of the 6 periods, the Cambrian, Devonian, and Carboniferous periods are of a longer duration than the others. All the periods are divided into respective stages, which vary in duration. In some timescale versions, especially in the USA, the Carboniferous period is known in the form of two separate divisions: Mississippian and Pennsylvanian, though the above chart shows a universally accepted version. 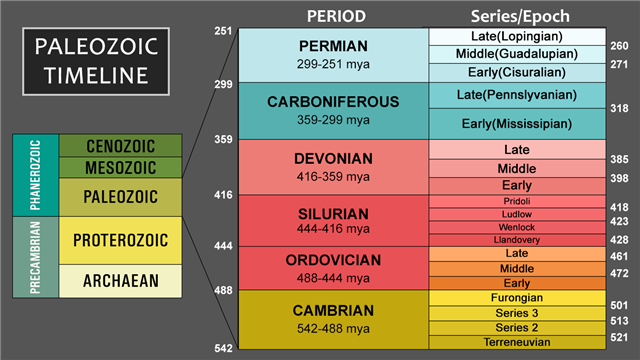 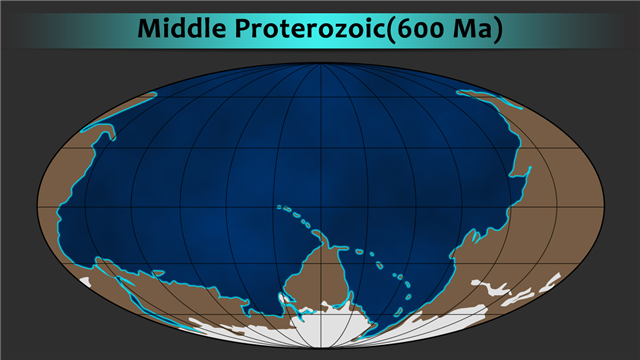 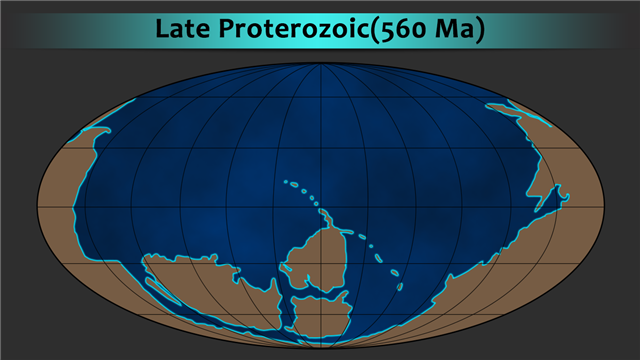 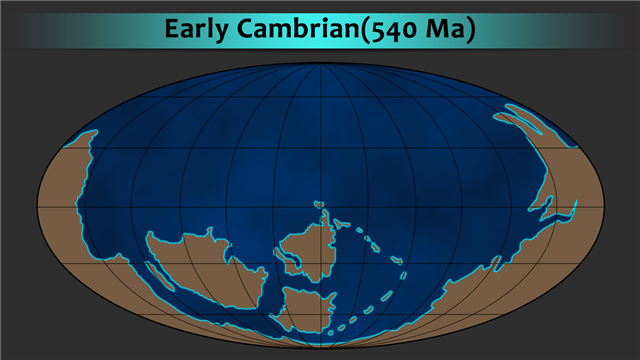 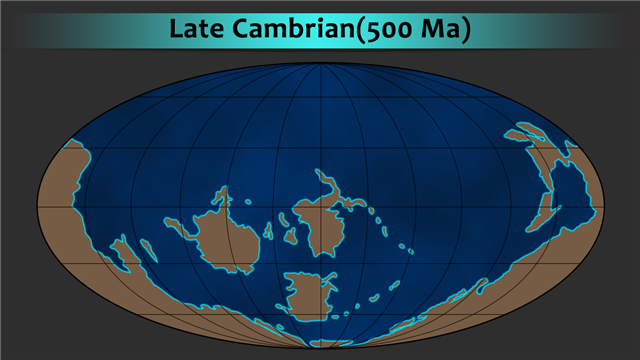 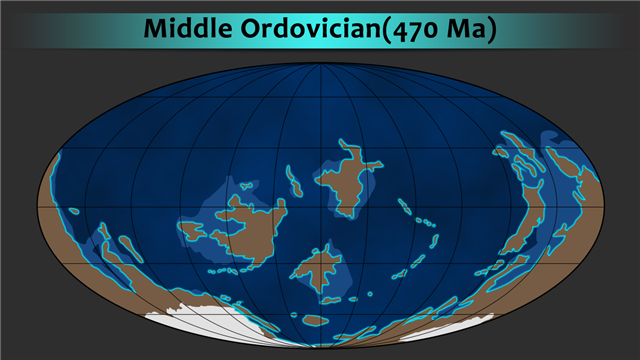 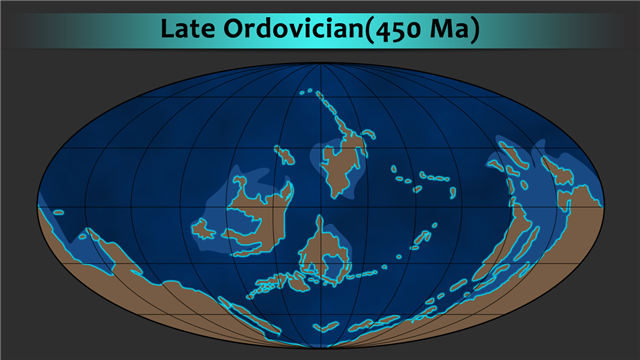 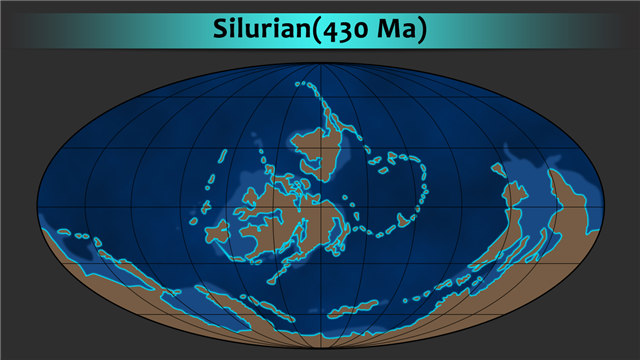 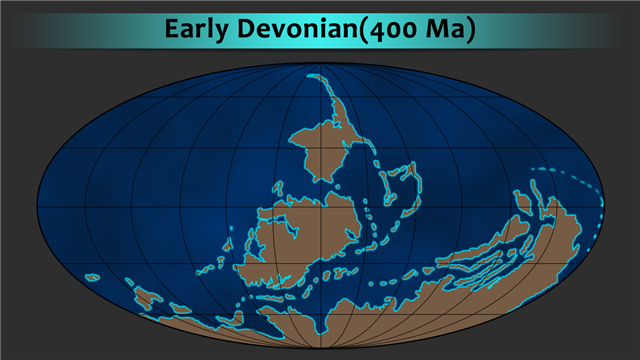 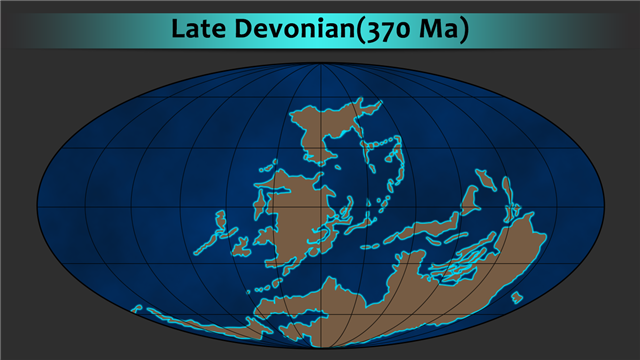 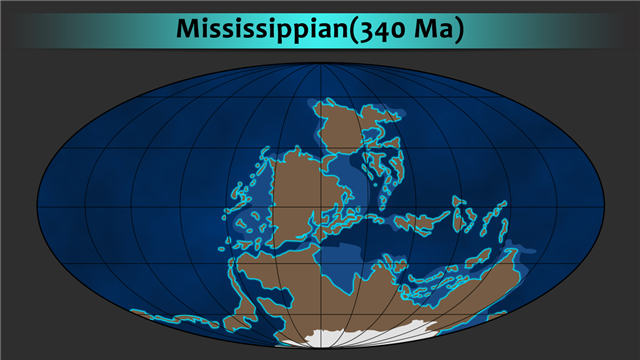 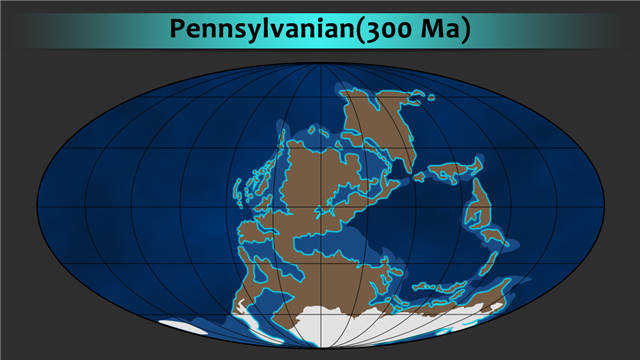 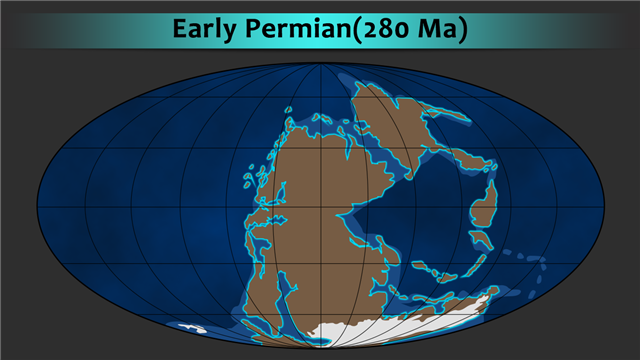 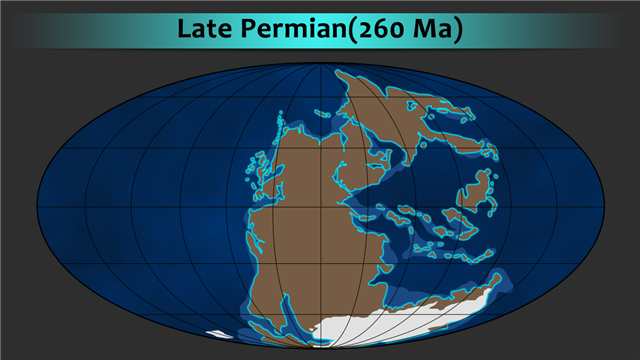 From a geological point of view, the Earth’s surface experienced a lot of activity, including shifting of tectonic plates, formation of mountain chains, formation of coal beds, etc. At the beginning, a supercontinent called Pannotia broke up into smaller continents, thus forming several basins and small oceans between the land portions. A sudden influx of water was probably one of the main factors which led to the explosion of life at the start of the Cambrian period. At the end of Permian, all the landmasses merged again to form a supercontinent called Pangaea.

Marine transgression were common, leading to the formation of numerous sedimentary deposits in basins. In the North American subcontinent, some mountain building activity took place in the form of the sediments, that formed a part of the Appalachian mountain range. In the Mississippian period, mainly marine sediments got deposited, overlain by sand, shale, and coal deposition, that belonged to the Pennsylvanian period. At the same time, the African subcontinent must have been near the polar areas, on the basis of several fossil evidences. The continent called Gondwanaland started forming slowly, and this resulted into the formation of major mountain orogenies, like Acadian and Caledonian. The Appalachian and Ural mountain ranges are a product of such couple of orogenies.

After the Ice Age that occurred during Silurian, the continent called Baltica, which consisted of Russia and other northern European parts, moved to the tropical regions. Likewise, the continent of Laurentia was also characterized by tropical climate. In the middle Paleozoic, both these landmasses merged together, whereas, in the late Paleozoic, Gondwanaland merged with the other remaining continents to form a supercontinent called Pangaea.

After extensive research and careful analysis of geological rock samples dating back to the Paleozoic Era, it has been concluded that the entire span of about 200 million years witnessed some of the greatest and most varied climate changes. Cambrian started with climatic characteristics which were more or less like the present ones. During Ordovician and Silurian, the climate became warmer, and life flourished both on land and in the oceans along with marine transgression; according to studies, this has been attributed to a phase of global warming experienced by our planet.

However, conditions changed drastically as Gondwanaland moved to the polar regions, thus causing extreme glacial activities and the subsequent beginning of an Ice Age. This is believed to be the reason for the second largest mass extinction of the Phanerozoic period, when at least 60% of invertebrates in the oceans and seas became extinct. The climate became warm again during the Devonian and Carboniferous periods, and oxygen levels increased steadily. Devonian is known as the ‘Age of the Fish’, as such climate proved to be favorable for their dominance in this time-span.

Similarly, warm temperatures caused a lot of diversification in terrestrial plants, forming dense forests similar to the present rainforests. This is the reason why the period is named Carboniferous, as one of the largest and best quality of coal seams formed in this period; the reason being a large source of incompletely decomposed swamp forest wood. Carbon dioxide levels dropped further, but recovered at the end of the Carboniferous period. A drastic change in climate was present during Permian, and coupled up with marine regressions, increase in CO2 levels, etc., caused the largest mass extinction.

The first few species of plants thrived in aquatic environment, and till the Devonian period, they also evolved on the continental parts. During and after the Carboniferous, large areas of land consisted of forests similar to the rainforests of present time. Climate change was one of the main reasons why the number of floral species decreased at the end of the Paleozoic. In the Carboniferous period, numerous types of plants evolved and formed dense forested areas (note: not all continents showed such evolution).

Some of the major plants that dominated this era are progymnosperms, cycads, glossopterids, ferns pteridophytes like ferns, etc. In progymnosperms, the vascular tissue showed secondary growth, and these tall trees reproduced in the form of spores. Archaeopteris is a very good example of this genus. Archaeopteridales and Aneurophytales are two main types of the progymnosperms. The latter existed in the Devonian period, whereas the former evolved during the end of the Devonian and beginning of the Carboniferous periods. Apart from all these plants, in the Paleozoic, several marine algal species thrived, providing food for the invertebrates.

Of all plant genera that were present in this era, the ferns dominated extensively. Many species are preserved in sediments, leading them to be one of the floral index fossils used for identification of Paleozoic rocks. Cycads were a common appearance, having short stems and large leaves, though they underwent tremendous evolution during the next era, i.e., Mesozoic Era. The glossopterids flourished mostly during late Paleozoic, when climate was warmer and oxygen percentages were considerably higher. Their fossils are still found extensively, apart from pteridophyta fossils. 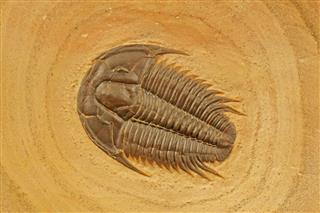 At the beginning of Cambrian, faunal life evolved dramatically in the form of invertebrates like trilobites (arthropods). Other genera belonging to this phylum were the first ones to dominate the continents. One of the first vertebrate species to evolve in marine waters were the fish; they later adapted to the freshwater environment. A few species had bony skeletons and lung-like organs, which ultimately caused the evolution of amphibians and reptiles on land.

An invertebrate called Pikaia gracilens existed in the Cambrian oceans. Its fossils were first found in the Burgess Shale (British Columbia), and its appearance is in the form of a worm. Another phylum called brachiopoda was quite abundant; their bodies were enclosed in two-valved shells, which had a peduncle at the bottom for attaching to the substratum. Several hundred genera of these animals currently exist, whereas more than 5,000 genera thrived in the past. Other faunal varieties are crinoids and graptolites. Such creatures are said to be the ancestral forms of modern-day arthropods, echinoderms, cnidarians, etc.

Trilobites are said to be one of the most successful faunal genera, which probably had at least 17,000 species. It varied in size from one to five inches dominated the marine environment. It is said that some even grew up to a length of about 2 feet in length. The bodies were in the form of segments held together by a platy exoskeleton. Trilobites are often used as index fossils, at least for the early Paleozoic period, due to their fossil abundance in sedimentary rocks that date back to this time.

Also called the P-Tr extinction, it formed the boundary between the Paleozoic and Mesozoic Eras around 250 M.A. Such was its intensity and effect, that almost 96% of marine life was wiped out on our planet, and around 70% of land vertebrate species were killed. The event is unique in different ways, considering that insects also did not escape the effects of extinction (based on geological studies, no insect population has been affected majorly by mass extinctions).

The causes for this event being controversial, few explanations and hypothesis have been presented by different research studies. Some of the main ones include flood basaltic volcanism, asteroid and/or meteorite impacts, release of toxic gases like methane and hydrogen sulfide in the atmosphere, drastic and sudden climate change including global warming and global cooling, etc., along with the combination of any of these events.

According to research, mass extinction did not take place in a sudden manner; rather, it is said that the event can be divided into ‘phases’ or ‘pulses’. The marine flora and invertebrate fauna were the first to be affected, followed by land species. The effects of the extinction were not uniform; rather, a few organisms might have developed new methods of adaptations and recovered after millions of years. It is said that recovery of life took at least a few million years or so. After the event, several organisms (both floral and faunal), which were not flourishing a lot in the Paleozoic, started dominating the biosphere of that time (for example, the evolution of land reptiles like dinosaurs).

Post 20th century, extensive research has been conducted on the subject of geological time scale, and fossil evidences suggest that the first vertebrates might have evolved in the oceans more than 40 million years before the original estimated date. Nevertheless, the Paleozoic Era was characterized by a lot of dynamism of our planet, including geological and life-related events.