The Warren truss bridge is an extremely popular bridge design, and many examples of it can be found all across the world. In this article, we will look at some interesting information about this design, such as its history, working, pros and cons, and much more. 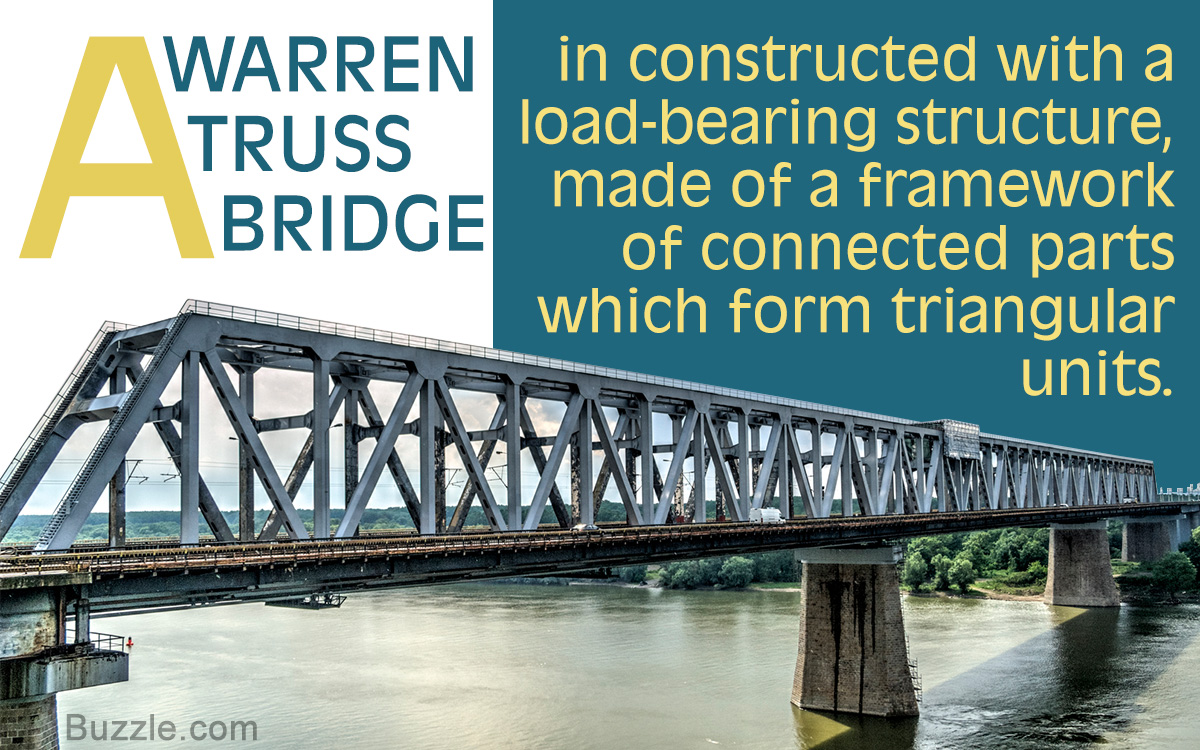 The Warren truss bridge is an extremely popular bridge design, and many examples of it can be found all across the world. In this article, we will look at some interesting information about this design, such as its history, working, pros and cons, and much more.

The first truss bridges were built in the 1820s, and were used to transport heavy carts. Today, with modern innovation and improvements, these bridges transport all kinds of vehicles, from cars to trains. In fact, historians agree that without this design, railway transport would not have become as popular as it is today.

Many different ways of creating truss bridges have been invented, by attaching the bridge parts in various ways. Depending on this, one can find designs such as lattice truss, McDonald truss, Allan truss, Pratt truss, Whipple truss, K truss, and Warren truss. When you see an equilateral triangular framework on a bridge, it is a common example of Warren trusses. This kind of support structure is used in various constructions, but is primarily found in bridges. The joined triangles in the framework are characteristic to the design, which is why it is sometimes also called a triangular truss.

Most of these bridges were built using iron, steel, or timber. Since the development of steel box girders, stressed concrete, and cabled structures, the number of Warren truss bridges are gradually declining. Let us now look at some other facts about this design, like its history and how it works.

The first bridge of a truss design was built in the 1840s, by Alfred Neville in France. However, this bridge used an isosceles triangle framework. The Warren truss bridge design was patented in Britain by James Warren and Willoughby Theobald soon after in 1848, with an equilateral triangle framework. This design was used widely to build bridges all across Britain and India. Traditionally, most of the railway infrastructure used this design. These designs were borrowed from Europe, and became a common sight throughout the US in the 20th century. Since then, it has gained immense popularity, and many bridges that exist today are based on this design.

Parts of a Warren Truss Bridge

The Warren truss design uses equilateral triangles in the framework to spread out the load on the bridge. These triangles limit the force of the load to compression and tension of the bridge parts. In the image given above, the upper and lower horizontal parts are in tension, along with the diagonals in the center, while the outer diagonals are compressed. Sometimes, when the upper portions of the bridge are not stiff enough, engineers may add vertical beams dividing each triangle in the center. This prevents the bridge from buckling under pressure. Such a design is known as a subdivided Warren truss bridge. Other designs include the Double Warren, which has intersecting triangle parts, and give an appearance of diamond shapes; and the quadrangular Warren truss bridge, which has numerous diagonal ridges, giving it a netted appearance.

When a vehicle is moving across the bridge, the stress on the various parts of the bridge near the vehicle changes from compression to tension. The design of such bridges often depends upon the availability of machinery, and cost of materials and labor. These bridges can usually span to around 400 feet in length.

The design of the Warren truss bridge is such that no tie, strut or beam bends under the straining forces of a moving vehicle. The forces applied by any vehicle, such as a car or train, will be focused on one point directly below the vehicle. The top and bottom cords of the bridge undertake bigger forces when the load is at the center of the bridge. Therefore, it is important for engineers to make appropriate measurements, so that each part of the bridge is strong enough to handle the load. In this way, static and dynamic loads can be easily and safely transmitted from one side to the other. On the other hand, if the forces by the vehicle, such as a train, is applied across the entire length of the bridge, the forces are evenly distributed, enabling the bridge to handle larger loads.

The approach spans of the Sydney harbor are made in the Warren truss style with mild steel. Each span weighs around 1,200 tons. Other famous Warren truss bridges are the Brookport Bridge (USA), Harteloire Bridge (France), Koblenz-Felsenau Footbridge (Switzerland), Nishiki Bridge (Japan), and Pipeline Bridge No.6 (Germany).

With the inclusion of several newer bridge designs, such as the cable-stayed bridge, cantilever bridge, and arch bridge, Warren truss bridges will slowly but surely become a thing of the past. However, they will always hold a special place in the records of engineering and history.