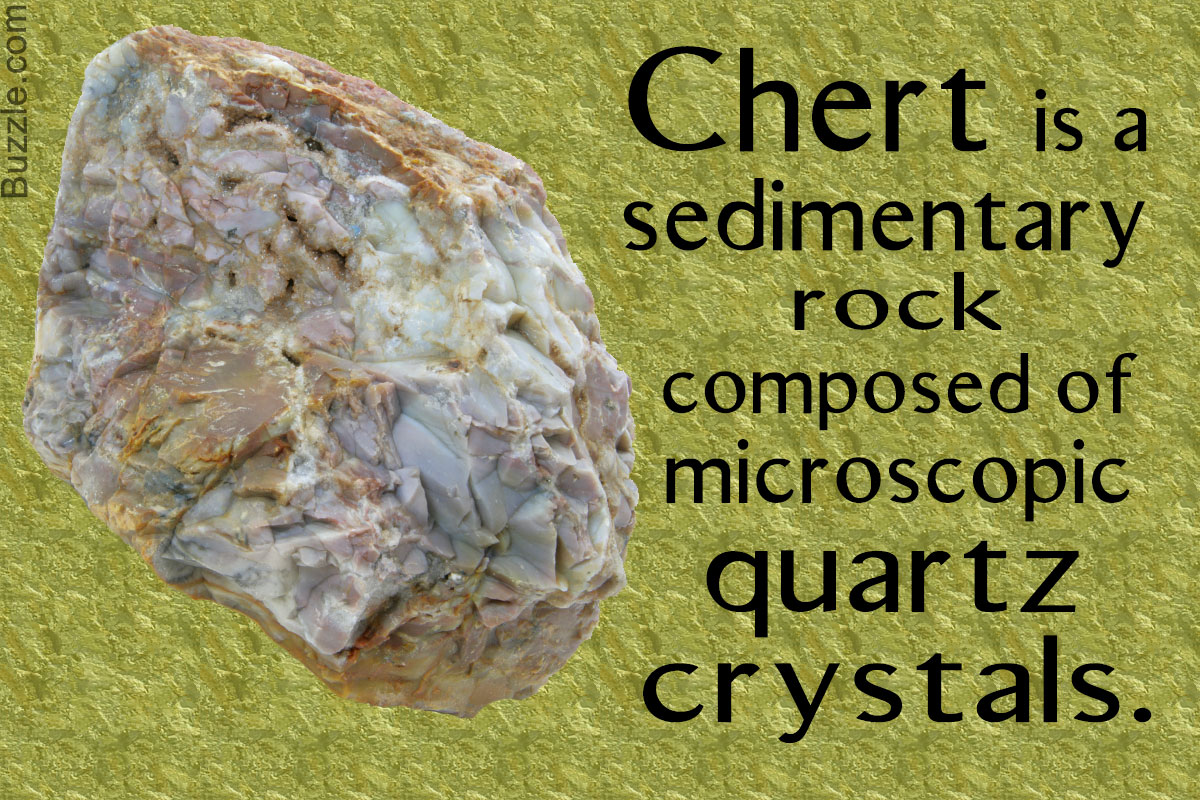 Chert is a microcrystalline or cryptocrystalline sedimentary rock made up of silica (silicon dioxide or SiO2). A popular silica mineral is quartz.

As chert rock is rarely seen, it was a precious possession of early people who traded and transported it to distant places. In the early 8000 BC, people of England and France dug up soft chalk of about 300 feet deep to mine chert nodules.

Chert is a microfibrous sedimentary rock made up of silica or silicon dioxide. Small fossils may also be present in it. Its color can be gray, black, white, brown, yellow, grayish brown, light green or reddish brown. The color is mainly due to the elements that are present in the rock. For example, the white color is usually due to the presence of carbonate impurities. Black color is due to organic matter or clay. Red, yellow, and brown colors are due to hematite. The green variety may contain chlorite or smectite from diagenetically-altered volcanic rocks.

Chert is found embedded in rocks as nodules, stone-like masses and as layered deposits, where it is formed due to some type of diagenesis. The process of diagenesis is explained below. In ancient times, people used chert as a weapon or cutting tool due to its hardness. The term flint is also used for this material.

Chert rock is found as round or irregular-shaped nodules in greensand, limestone, chalk and dolostone formations. It also occurs in thin beds or layers with many jaspers and radiolarites.

Chert rocks are found as nodules and concrete masses in carbonate rocks. They vary in size from a few centimeters to many meters in length. The silica that is present in sediments of carbonate rocks comes from groundwater or may come from silica-secreting organisms like diatoms, radiolaria, and sponges which thrive in the oceans and deep sea beds. They possess a silica skeleton. Some sponges produce spicules that are made of silica. The organisms may not be present in the chert nodules, but their remains might have been dissolved by fluids flowing through the rock during diagenesis.

Diagenesis involves transformation of existing sedimentary rocks into a different sedimentary rock at pressure and temperatures less than that is needed for the metamorphic rock formation. Diagenesis involves the changes that may happen after sediment is deposited until it becomes rock. The processes in this stage are compaction, precipitation, cementation (ions present in groundwater chemically precipitating to form new crystals between sediments), and bacterial action. Small crystals of silica present in the sediments (responsible for the formation of carbonate rocks) develop within them. Many silica crystals develop into nodules or concretionary masses. These nodules or masses grow and combine with one another to form a layer of chert within the sediments. Some of the silica in chert is believed to be formed biologically. 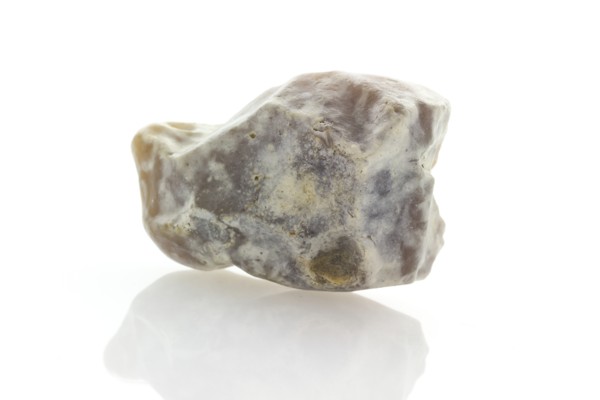 Chert is a very fine-grained quartz, a silica mineral with small impurities. It has a smooth (non-clastic) sedimentary texture. The rock has a waxy or glassy luster. It is both opaque and translucent.

Chert is found in colors such as pale, smokey gray, rarely dark gray, white, brown, red, green and yellow. It is occasionally reddish brown, purple brown, nearly black, or has patches of many colors.

Chert is a very hard substance. Its hardness is about seven on the Moh’s scale. One of the most essential and widely used tests for distinguishing mineral specimen is the Moh’s Hardness Test.

Chert shows a property called conchoidal fracture. This fracture is a curved breakage that looks like concentric ripples of a mussel shell. It is usually seen in amorphous minerals like flint, opal or obsidian, but may occur in crystalline minerals like quartz. 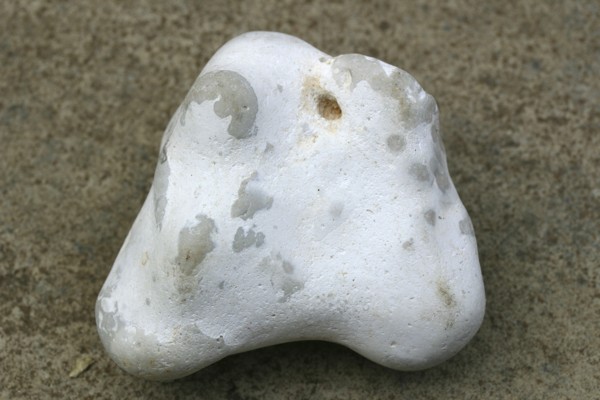 Chert is generally known as flint when it is found as nodules embedded in chalk or marl. Flint is a compact microcrystalline quartz.

Common chert is found embedded in limestone formations. It is the most commonly found chert. 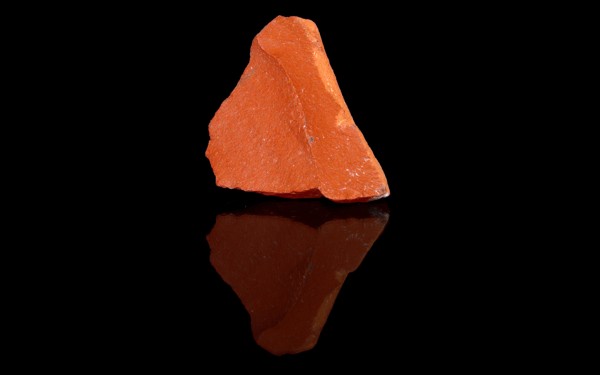 Jasper, is a microcrystalline form of quartz. It is an opaque material and a fine-grained variety of Chalcedony. It is found in colors like red, pink, green, gray, white, brown, yellow, and blue-purple. 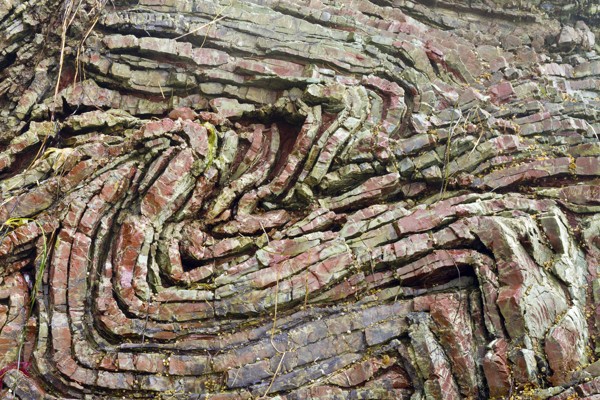 Radiolarite is a hard sedimentary rock containing silica. It is composed of the remains of the unicellular organisms called radiolarians. 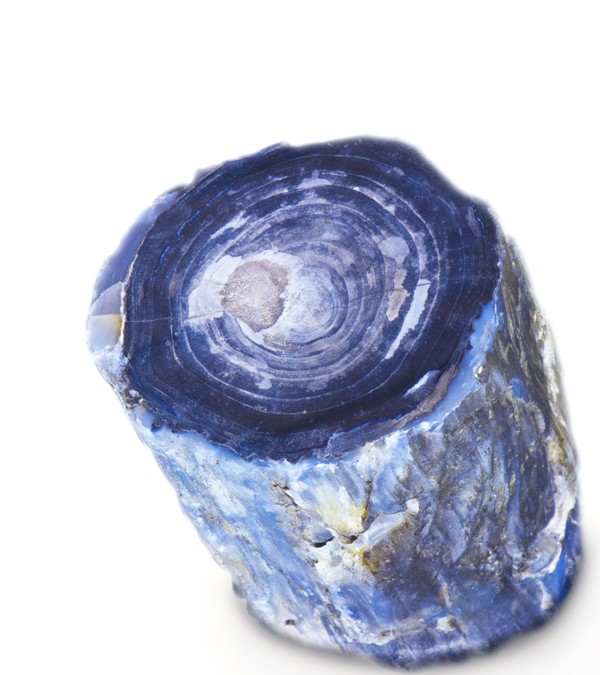 Chalcedony is a cryptocrystalline form of quartz. It is made up of fine-grained variety of silica minerals. 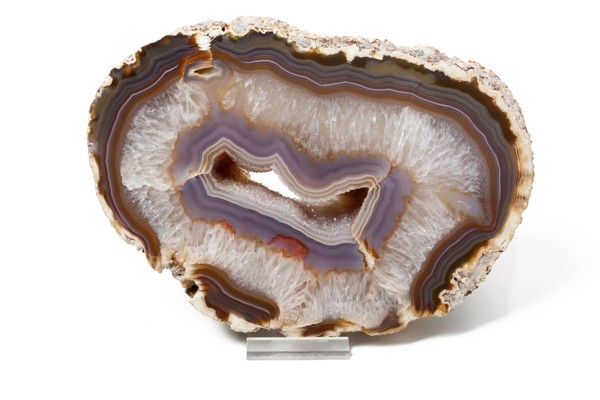 Agate is a form of finely-grained cryptocrystalline variety of silica, especially chalcedony. 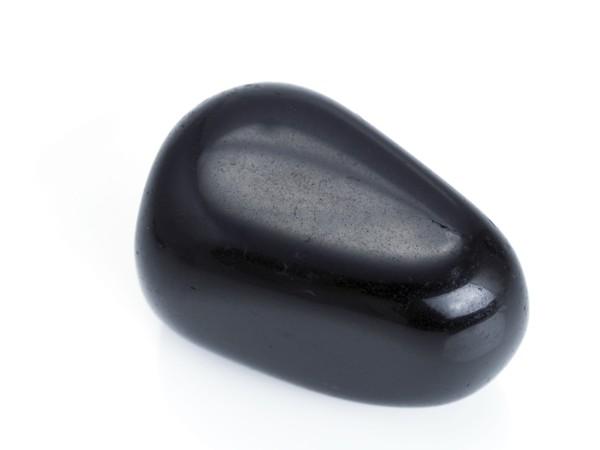 Onyx is a type of chalcedony.

Magadi-type cherts are formed by stripping of alkali ions from silicates in highly alkaline lakes such as Lake Magadi in Kenya.

Novaculite is a form of chert or flint found in the Ouachita Mountains of Arkansas and Oklahoma and in the Marathon Uplift of Texas. It has a porous and even texture so it is useful as a sharpening stone.

Taconite is an iron-bearing sedimentary rock containing around 35 percent hematite and magnetite.

Porcellanite is an impure variety of chert made up of clay and calcareous matter. It is composed of silica. 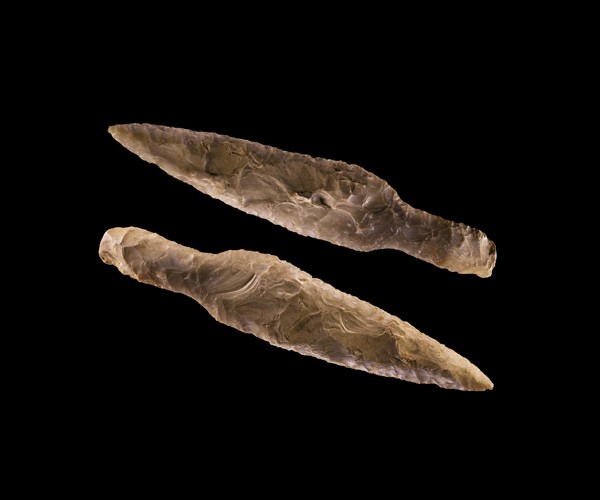 Chert is used for decorative purposes today. Earlier, it was used to make important tools owing to its hardness and conchoidal fracture. Early hunters and warriors implemented ways to break it to make sharp-edged, durable tools and weapons like knife blades, arrowheads, scrapers and ax heads. The flint, due to its hard and smooth surface, was used to strike a spark. These evidences are based on the fact that tons of chert fragments were found at locations where these tools were made.

Chert is used for decorative purposes today. Earlier, it was used to make important tools owing to its hardness and conchoidal fracture. Early hunters and warriors implemented ways to break it to make sharp-edged, durable tools and weapons like knife blades, arrowheads, scrapers and ax heads. The flint, due to its hard and smooth surface, was used to strike a spark. These evidences are based on the fact that tons of chert fragments were found at locations where these tools were made.