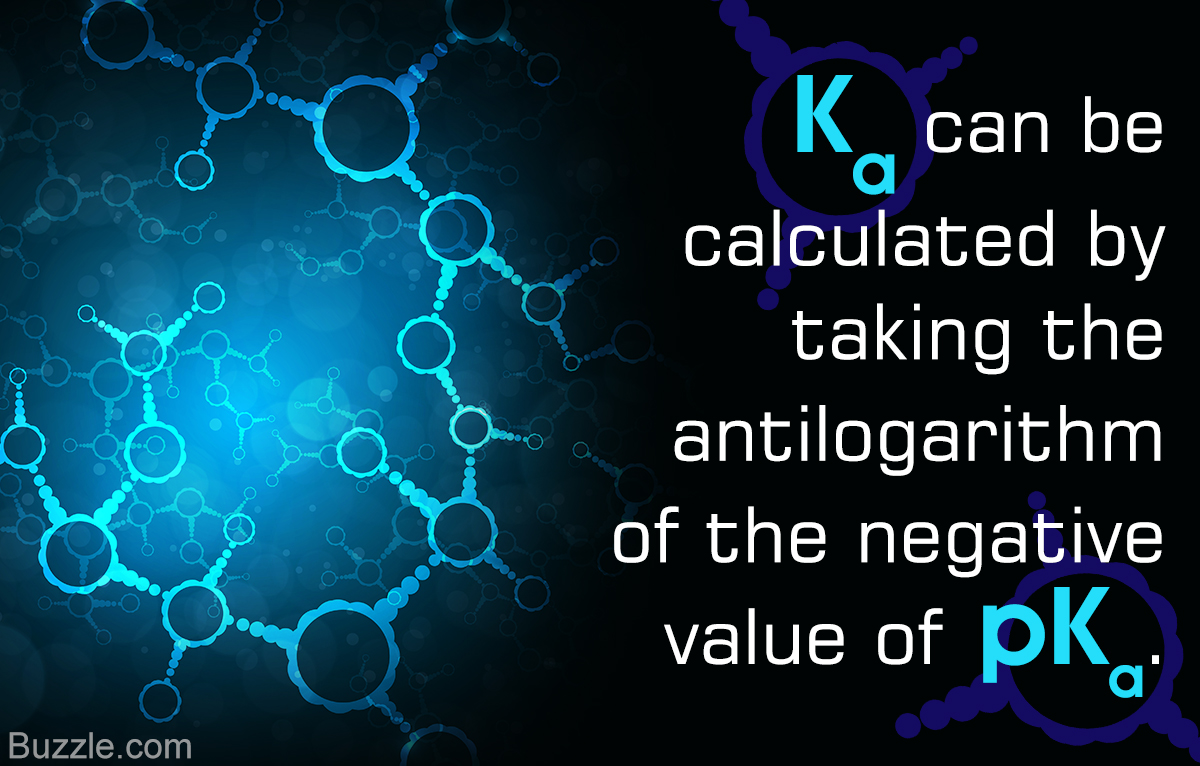 The term ‘pKa’ is more commonly used in chemical calculations as compared to ‘Ka’. Despite this, there is a lot of confusion between the two concepts. This ScienceStruck post tells you how to convert pKa to Ka, with the help of an equation relating the two values.

Despite the general notion that only strong acids can burn the skin, strong bases also have the same effect. Moreover, acids and bases always neutralize each other.

The chemical nature of any substance depends on the charged particles that it produces, called ‘ions’. By this principle, an acid is a substance which readily donates its hydrogen ions (called protons) when dissolved in water. On the other hand, a base is a substance which readily accepts such free protons. Based on how eagerly these substances donate or accept such protons, they are categorized as ‘strong’ or ‘weak’. This is how the Brønsted-Lowry Theory describes the concept of an acid and a base.

While pH is a popular value used to indicate the number of protons that are produced by a substance, there are other quantities, like Ka, Kb, pKa, and pKb, used to explain the strength of these substances. They are commonly used by chemists to decide the strength of chemical reactants in laboratories, and by pharmacists to understand the dosage of drugs. However, these values can only be used for Brønsted acids and bases, i.e., those substances which give or accept protons. This is because, other theories, like the Lewis Theory, define acids and bases in terms of electron transfers, so values like Ka and pKa, which deal with protons, lose their relevance. The following sections describe the conversion of the pKa value of an acid to its Ka value.

Ka is known as the ‘acid dissociation constant’. When an acid is dissolved in water, its molecules split up into different ions (atoms with positive or negative charges).

At any given time, the aqueous solution of an acid contains some intact molecules and some ions. Whether the acid is a strong or weak one depends on the proportion of these molecules and ions. If the number of ions exceed that of the acid molecules, then the acid is strong, since it easily splits up into ions (dissociates) . On the other hand, if the number of molecules exceed that of the ions, then the acid is weak, since it does not form ions readily. Therefore, the acid dissociation constant (Ka) tells us whether an acid is strong or weak. Let ‘HA’ be a molecule of an acid in an aqueous solution.Then it dissociates into ions, as given below.

The value of Ka for this acid is given by the following equation.

The term pKa is nothing but the negative logarithm of the acid dissociation constant (Ka), taken to the base 10.

In fact, the term ‘p’ before any value in chemistry means that the negative logarithm of that value has been taken. This is done because the value of Ka is often too large or too small, so the pKa is a better alternative for chemical calculations. However, it is commonly seen that the term ‘acid dissociation constant’ is incorrectly used to refer to both, the Ka and pKa values , when it is only apt for the former.

The following equation describes the relationship of pKa to Ka.

From the above equation it is clear that the higher the Ka value, the lower pKa will be. Thus, strong acids have a high Ka and a low pKa, while weak acids have a low Ka values and a high pKa.

Thus, another formula to convert pKa into Ka is to find the value of 10 raised to the negative pKa value.

Let’s assume that we are given the pKa value of hydrochloric acid, pKa = -7. Let us find its Ka value from the above expressions.

The low pKa and large Ka values indicate that hydrochloric acid is a strong acid, which readily splits into its ions (H+ and Cl–).

It is clear how the Ka value can be calculated in a single step, if the pKa value is available. Acids with a Ka value less than 1 are considered weak, while those with values higher than 1 are strong.