Here’s How to Calculate Dilution Factor from Given Concentration

Chemicals in concentrated forms are seldom useful. Hence, they are diluted using solvents in order to reduce their 'ph' value. This ScienceStruck post shows how to calculate the dilution factor of solutions, given their initial and final concentrations. 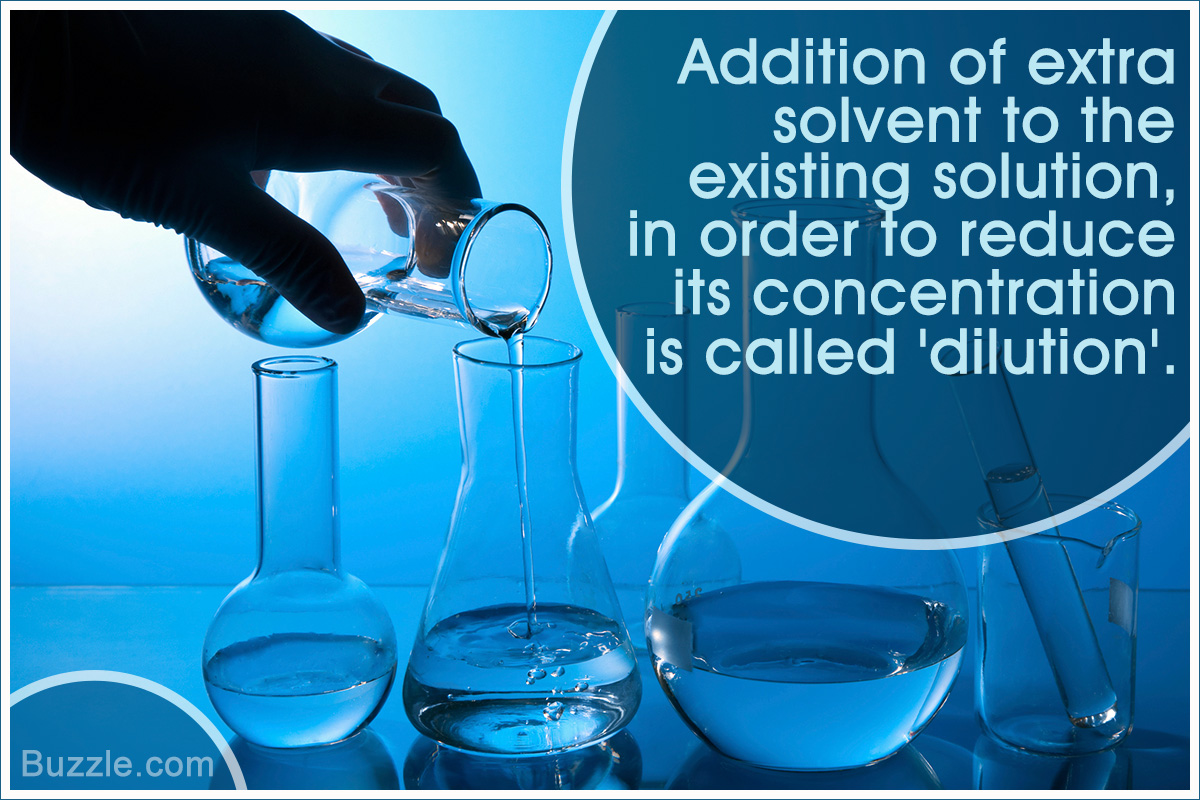 Chemicals in concentrated forms are seldom useful. Hence, they are diluted using solvents in order to reduce their ‘ph’ value. This ScienceStruck post shows how to calculate the dilution factor of solutions, given their initial and final concentrations.

The forces responsible for the binding of a solute and solvent to form a solution are ‘van der waals force’ or ‘hydrogen bonds’.

According to chemistry principles, a solute and solvent combine to form a solution. An example can be salt dissolved in water. In order to understand how to calculate the dilution factor from a given concentration value, we need to first understand a few terms.

Reducing the concentration of any chemical (solution, gas, vapor) is called dilution. The concentration level of many solutions is much more than the desired level. Therefore, a solvent is added to such solutions to make them diluted. This process is carried out in day-to-day life. Consider concentrated orange squash. It is diluted with water before consumption. Dilution reduces the ‘ph’ level of the chemical.

The amount of solute dissolved in any solvent is termed as the concentration. Concentration is the inverse of dilution. Its units are M (molar), mg/L, and ppm. Molarity of a solution is higher when it is concentrated. The number of moles of solute remain the same before and after dilution.

If you have three out of four values in the above equation, you can go about calculating the fourth value.

The process of bringing about step-by-step dilution of a solution is called serial dilution. In this process, the dilution factor remains constant throughout. Serial dilution finds its applications in physics, pharmacology, biochemistry, etc.

Consider you have 2L of an aqueous solution, with molarity 0.50M. You want to dilute this solution to molarity 0.20M. What needs to be done?

The result implies that the original solution needs to be diluted more by 3L, such that the final volume of the solution becomes 5L. That is, as the concentration of the solution decreases, the volume increases (inverse proportion).

Pulverized iron is added to a vessel filled with water. Its molarity is 5ppm. You take 8mL of water from this vessel and add 2mL of distilled water to it. What is the molarity of the resulting solution?

Dishwashing liquids need dilution as they are too concentrated. Diluting them doesn’t affect their effectiveness in cleaning dishes or cookware.

Dilution is a commonly followed practice for diluting any solution, gas, or vapor. For human beings, it is difficult to breathe pure oxygen. However, it gets mixed with other gases in the atmosphere, which makes it suitable for the breathing process. Therefore, the significance of this process is crystal clear.