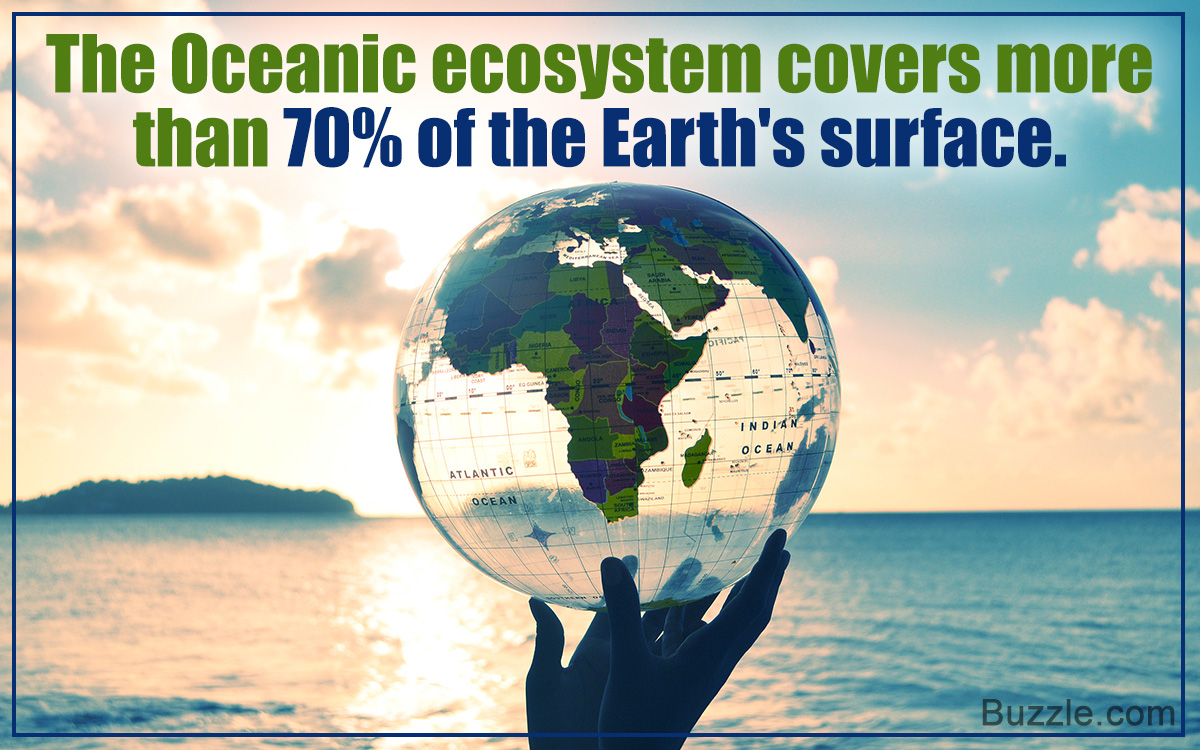 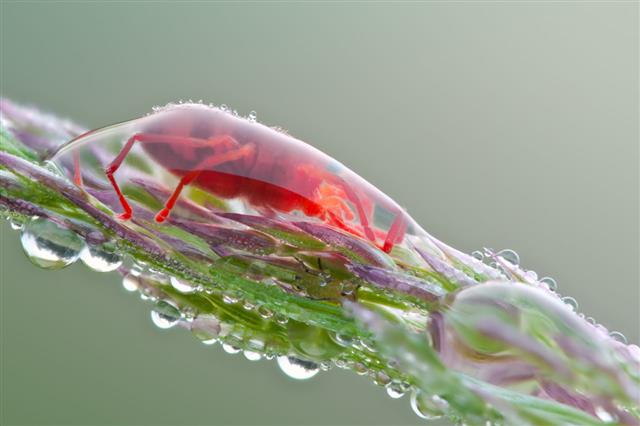 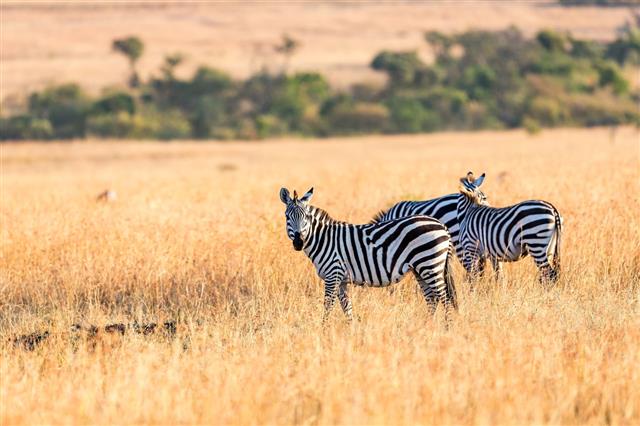 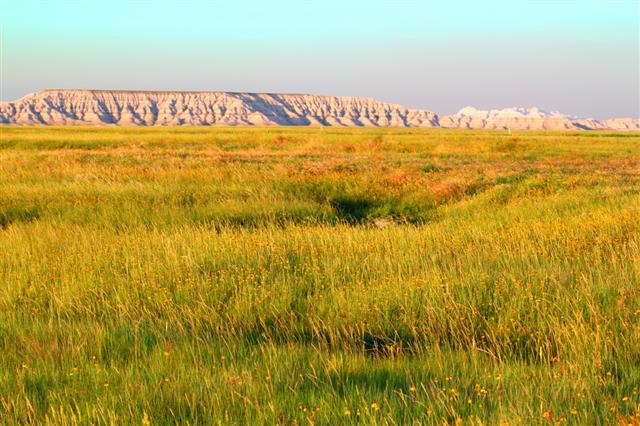 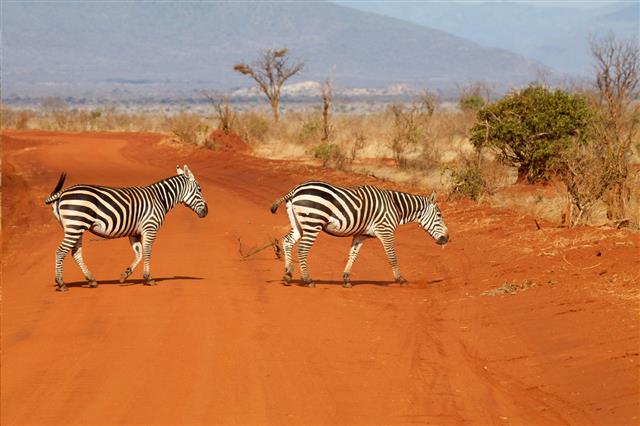 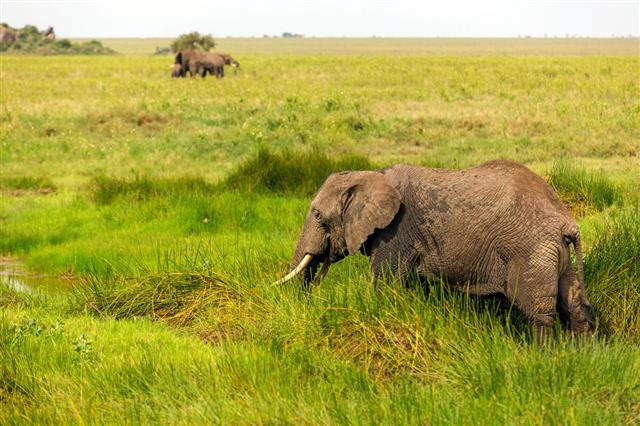 The oceanic ecosystems consist of compounds – mainly salts such as sodium, chlorine, etc dissolved in water, this salinity distinguishes them from other freshwater ecosystems.

Aquatic ecosystems consist of ‘oceanic ecosystem’ and ‘freshwater ecosystem’. In the oceanic ecosystem, only two living things are capable of producing food using the process of photosynthesis. These two types of producers are called ‘phytoplankton’ and ‘seaweeds’. Phytoplankton are mostly microscopic and they are constantly drifted along by the ocean currents. Phytoplankton are eaten by the zooplankton. Seaweeds are large-sized algae, which are naturally glued to the rocks. Ocean ecosystem also consists of a variety of herbivorous creatures. Herbivores such as fish, turtles, and sea urchins mainly feed on seagrass, algae, and plants. Now, let’s delve deeper into the classification and supported plant and animal species of various oceanic zones. 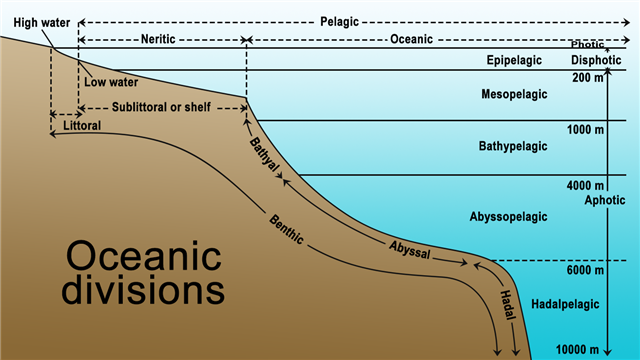 Marine ecosystems can be divided up into many zones depending upon the depth of water and the attributes of the zone.

The marine zone classification depending upon the ‘sunlight penetration into ocean water’ is as follows:

The topmost layer near the surface of the ocean is called photic zone. Sunlight penetrates into this zone, due to which the process of photosynthesis is feasible. This layer is also called sunlight layer.

The layer which extends from the base of photic layer to a depth of about 200 meters is called the disphotic zone. Small amount of light penetrates through water into this zone, which is insufficient to induce photosynthesis. This is also known as the twilight layer.

The layer beneath the disphotic layer is called the aphotic zone. With less than 1% sunlight penetrating this region, it is also called the darkness layer. No photosynthesis occurs in this zone.

Marine environment is made up of ‘benthic’ and ‘pelagic’ environment, both of which have been illustrated and explained below. Pelagic zone refers to the water body and the benthic zone refers to the ecological region of the sea floor. There are a large variety of fish and other species that live in the different zones of the oceanic ecosystem. However, only a few of them have been displayed in the image given below:

The pelagic zone is the region between the ocean floor and the ocean surface.The fish living in this region are called ‘pelagic’ fish. The pelagic zone classification (including the plant and animal species) depending upon the ‘depth’ is as follows:

This zone has the depth of about 200 meters (656 feet) below the ocean surface. Microscopic plants called phytoplanktons are present in this zone. Sunlight penetrates this zone which facilitates the process of photosynthesis.

Supported Animal Species: Bigeye tuna, dolphin, orcas, blue whales, sharks, jellyfish, sea turtles. The two main type of fish in this zone are forage and predator fish. Predator as well as forage fish are mostly spindle-shaped, having large mouths, smooth bodies, and bifurcated tail. Most of the fish in this zone have a sleek body.

This zone extends from epipelagic zone at about 200 meters (656 feet) to a depth of about 1000 meters (3,280 feet). Sunlight penetrates to a very little extent, which makes the process of photosynthesis impossible.

This zone extends from mesopelagic zone at about 1000 meters (3,280 feet) to a depth of about 4000 meters (13,123 feet). Sunlight doesn’t penetrate in this zone. This region is very low on nutrient levels.

This zone extends from bathypelagic zone at about 4000 meters (13,123 feet) to a depth of about 6000 meters (19,685 feet). Sunlight doesn’t penetrate in this zone. Due to cold and shortage of nutrients, very few species exist in this zone.

This zone extends from abyssopelagic zone at about 6000 meters (19,685 feet) meters to the bed of the ocean. Sunlight doesn’t penetrate in this zone. The nutrient levels of this zone are very low, besides the low temperature. Due to such uncongenial living conditions, very few species survive in this zone.

The benthic zone for an ocean consists of the ocean floor, the layer containing sediments, and its sub layers. The animals living in this zone are referred to as benthos. The benthic zone classification depending upon the ‘depth’ is as follows:

This is the part of the ocean which is near the floor. This is also called ‘intertidal’ zone. Intertidal means a zone where land and sea converge. Due to its conguity with water, this region can have different types of landforms. Due to availability of water, oxygen, sunlight, nutrients, and humidity a variety of species live in this zone.

This is the region of the ocean below the littoral zone. Constant pressure, temperature, and fair amount of sunlight make this zone very favorable for majority of the ocean species. This zone can also be referred to as the subtidal zone.

This zone is the same as the sublittoral zone. It is a region consisting of the shallow waters. It receives very good amount of sunlight and is rich in nutrients which is why the process of photosynthesis goes on smoothly.

The subsequent sub-zones of benthic zone are bathyal, abyssal, and hadal zone. These are same as the bathypelagic, abyssopelagic, and hadalpelagic described above. The animal species surviving in this zones can withstand huge water pressure. Despite the low eyesight, the species from this zone also have the ability to camouflage in order to safeguard themselves from predators.

● Oceans cover more than 70% of the Earth’s surface.

● The plant and animal life depend on each other for their survival. This is how an ecological balance is achieved in this ecosystem.

● It is the biggest collective ecosystem on planet Earth.

● Planktons are the microscopic plants in the ocean, which are in constant motion along with the ocean currents.

● About 90% of the ocean belongs to the aphotic zone also known as the darkness zone. No sunlight penetrates in this zone.

● Smaller animals feed on microscopic organisms such as plankton and are in turn eaten by comparatively larger animals. An example is planktonic krill eating other planktons, which is successively eaten by a larger species.

● Sun and moon’s gravitational pull acts on the ocean water. This induces the ocean tides as the Earth is in constant motion.

● Oceanic routes are widely used as means of transport by companies for shipping their products.

● About 97% of all the water on Earth is housed in the oceans.

● Salinity (the proportion of salt in water), changes for different marine ecosystems.

● Some of the world’s largest whales feed on certain species in the bathypelagic zone.

Earth’s Ocean is divided into major oceanic divisions. They are described in the descending order of their size as follows:

Even though oceans cover such a large surface of the Earth, very little do we know about the oceanic ecosystem. Its beauty and richness is unparalleled. However, surprisingly it is a part of our nature that is still left unexplored. 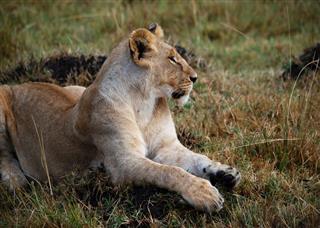 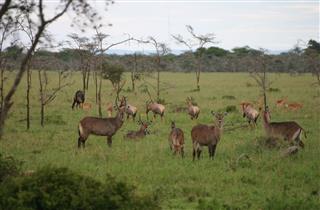 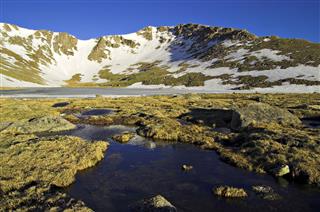 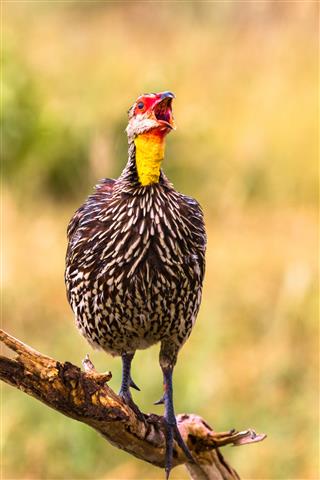