A Helpful Guide to Understand the Photic Zone

The region of a water body that receives enough sunlight for photosynthesis to take place, is called the photic zone. The characteristics of this environment encourages the growth of a wide variety of flora and fauna. This article will provide more information about the photic region and its biome.

Home / Uncategorized / A Helpful Guide to Understand the Photic Zone 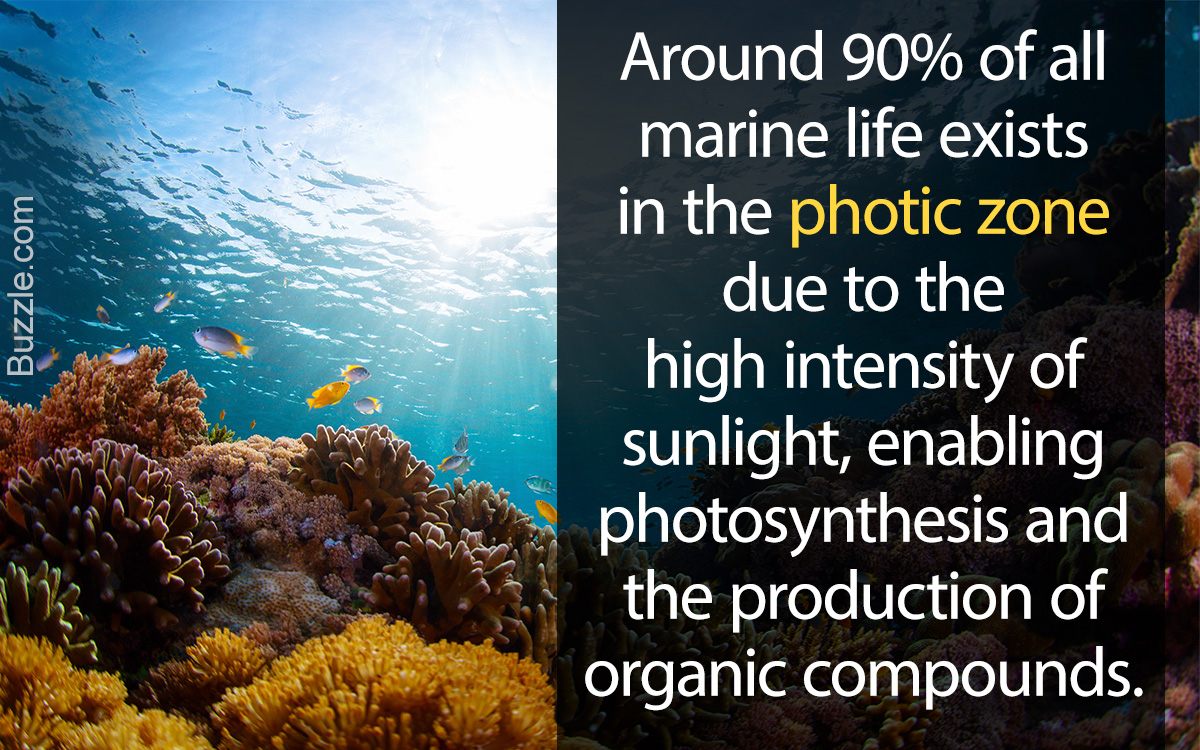 The region of a water body that receives enough sunlight for photosynthesis to take place, is called the photic zone. The characteristics of this environment encourages the growth of a wide variety of flora and fauna. This article will provide more information about the photic region and its biome.

Did You Know?
Around 90% of the gaseous oxygen in the Earth’s atmosphere is created by the photosynthesis of aquatic plants and phytoplankton living in the photic zone of the world’s oceans.

The photic zone definition is as follows: “The upper layer of a body of water delineated by the depth to which enough sunlight can penetrate to permit photosynthesis. On an average, the photic zone of an ocean reaches around 200 meters in depth. These waters usually exist till the depth of the continental shelf, and is home to an immense variety of plant and animal life.

Scientifically measured, the intensity of the sunlight in the photic zone should be at least 1% of that at the surface. This area is highly studied by humans due to the ease of access. Any person with basic scuba diving experience and equipment can explore this region well.

The animals living inside the aphotic zone are highly dependent on the dead matter of the photic zone for nutrition needed in sustaining life.

Illustration of the Photic Zone in the Ocean

Factors Affecting the Depth of the Photic Zone

The photic zone, also known as the euphotic zone (Greek for “well-lit”: εὖ “well” and φῶς “light”) or sunlit zone is the uppermost region of the pelagic zone and occupies around 25% of the ocean’s water. Usually, more than half of the light from the Sun is absorbed in the first meter of water, i.e, the entire red-light spectrum is absorbed by this level. By the time the sunlight reaches a 10-meter depth, the entire yellow light spectrum is also absorbed, and only 20% of light is still visible. Most marine beings do not live below this region. Around 50-70 meters depth all the green light is absorbed, and any photosynthesis taking place at this level is only sufficient to keep the organism alive, there is no scope for growth or reproduction using light as the source of energy. From here on, till approximately 100 meters depth, only 0.5% of sunlight is available―comprising blue to violet light spectrum. It is impossible for any photosynthetic beings to survive from here on. By the time the sunlight reaches 200 meters, only 0.005% of surface light is left, which is almost as good as complete darkness.

The temperature in this region ranges around 100 to 30 degrees Fahrenheit, while the pressure ranges around 15 to 300 pounds per square inch. Such an environment is very conducive for life. Hence, you can find a wide variety of animals and plants in the photic zone biome. We will now categorize these biological beings according to the food chain hierarchy existing in the photic zone.

With the evolution of life on Earth, different animals and plants undertook many changes to adapt to their surroundings and thrive. We shall look at the changes undergone by the organisms living in the photic zone, and how this helps them to flourish in this environment.

The photic zone is of great interest to marine researchers for conserving the natural state of the oceans. This zone is also important for the fishing business and other ocean-related industries. Most importantly, the survival of the photic zone is necessary for sustaining life all over our planet. Despite its importance, man has used the resources of this region negligently, threatening the state of the photic zone. Destruction of marine habitats, overfishing, oil spills, pollution have resulted in the near extinction of natural predators, dying coral reefs, creation of dead zones, etc. For this reason, organizations like Oceana, Sea Shepherd Conservation Society, Greenpeace, ASOC Southern Ocean Fisheries Campaign, etc., work to protect the ocean.

Even though the photic zone is such a large part of the Earth, we are just scratching the surface in terms of discovering its beauty and richness in resources. Its importance to us cannot be understated.