The halogen family consists of non-metallic elements. In this article, we shall learn more about the members of this family. 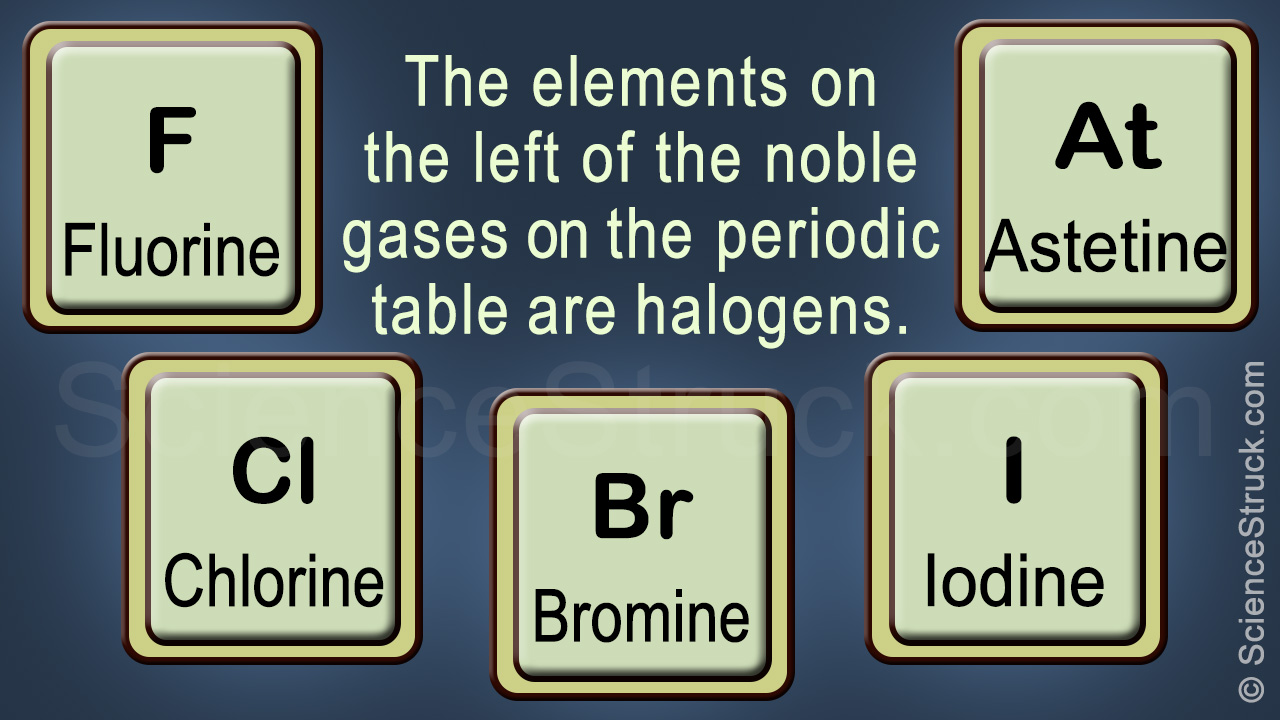 The halogen family consists of non-metallic elements. In this article, we shall learn more about the members of this family.

The modern periodic table has gone through various modifications and changes since its inception. Through the help of the periodic table, we can easily know the various features possessed by a certain family of elements in the world of chemistry. Elements belonging to the halogen family are the non-metallic elements, placed in the Group 17 of the periodic table. The term halogens means “salt producing”.

Now that we know what are halogens and where they are located on the periodic table, let us study a little about the distinct physical and chemical properties of the members of this group.

The general valence electron configuration of the members of the halogen group is ns2, np5.

All of them have 7 electrons in their outermost shells, and require only one electron to achieve an octet. Thus, they are highly reactive, and exist in nature as diatomic molecules i.e. F2, Cl2, Br2, and I2. The bonds formed between the two halogen atoms is a covalent bond. Astatine, however, does not exist as a diatomic molecule.

The intermolecular forces are very weak van der Waals forces, and the magnitude increases as we move down the group. This is exactly why fluorine and chlorine are gases, bromine is a liquid, and iodine is a solid, at room temperature. However, note that both bromine and iodine are highly volatile. Astatine, the last member of the group, is radioactive and has a very short life.

Atomic and ionic radii increase regularly as one moves down the group.

Halogens are poor conductors of heat and electricity.

The most characteristic feature of halogens is that they are colored. This is due to the fact that they absorb different wavelengths of light in the visible spectrum. The absorption of light energy causes the excitation of electrons to higher energy levels. The colors of the members of the halogen group are as follows:

► Fluorine is pale yellow.
► Chlorine is yellowish-green.
► Bromine is orange to reddish-brown.
► Iodine is dark violet.
► Astatine is dark black.

Thus, we see that the color deepens as we move down the group.

Halogens are non-metals, and display some characteriestic properties of non-metals. For example, the melting and boiling points of halogens increases as one moves down the group.

The most distinct property of halogens is that they are highly reactive, and the ions formed by these elements have a charge of -1. They precede the noble gases in the periodic table of elements, and have a very high tendency to acquire stable noble gas configuration by accepting one electron. The reactivity of halogens decreases as one moves down the group.

Since they are highly reactive, halogens do not occur in nature in their free state, but are found as compounds that they form with other elements.

The reactivity of halogens reduces as one moves down the group. Thus, fluorine is the most reactive of all halogens, while astatine is the least reactive. Fluorine is also the one with the highest electronegativity, a property that reduces down the period.

The electron affinity for halogens is extremely high, which means they readily accept electrons. This is because they have seven electrons in their outermost shells and are keen to achieve the octet configuration of noble gases. However, as one moves down the group, the electron affinity goes on decreasing as the size of the atom goes on increasing. An interesting thing to note here is that the electron affinity of fluorine is less than that of chlorine. This is due to the small atomic radius of the fluorine atom.

Halogens mostly undergo oxidation-reduction reactions. Since there are seven electrons in the outermost shell of halogens, the oxidation number for these elements is -1. They act as very strong oxidizing agents due to their high electronegativity.

All members of the halogen group have very high ionization energies. However, when we move down the group, we find that the value of ionization energy increases. This is due to the increasing distance of the valence electron from the nucleus.

The halogens, due to their high ionization energies, exhibit non-metallic character, which decreases as one moves down the group. Thus, iodine exhibits certain metallic properties.

Halogens react with metals to form metal halides that are predominantly ionic. However, as one moves down the group, the covalent character of the halides increases and ionic character decreases. The reason for this is that as one moves down the group, the size of the halide ion increases, and the ions are more readily polarized. Halogens form polar covalent compounds with non-metals and metals with higher oxidation states.

Except astatine, all elements of the family find extensive use in industries. Here are a few important uses of halogen group elements. Have a look!

Bromine and iodine are added to halogen lamps to lengthen the life of the filament. Compounds containing halogens are used in fire retardants.

► Fluorine is the first element of the halogen family, and also the most abundant, while astatine is the rarest.

► Bromine is the only non-metal that is liquid at room temperature.

► Fluorine, a highly toxic element, was isolated in 1886 by Henri Moissan.

► Iodine was discovered in 1811 by Courtois.

► Bromine was first isolated by Balard in 1826.

► Fluorine, the most reactive element in the periodic table, has no d orbital to expand its valence shell.

► There is no double or triple bonds required to explain the concept of bonding in halogens.

► The salts dissolved in sea water are mostly halides of metals, a common example being sodium chloride (NaCl) or table salt.

► Astatine has as many as 37 known isotopes, all of which are radioactive. Among them, the longest living isotope is 210At, which has a half-life of 8.1 hours. We have a very limited knowledge about the physical and chemical properties of astatine.

► The person who was the first to name the halogens, was Jöns Jakob Berzelius, a Swedish chemist.

► Among all the members of the halogen family, chlorine has the highest number of industrial uses. Common salt or sodium chloride is the most common compound of chlorine.

► Fluorine is termed as super halogen because of its high reactivity.

It’s important to note that halogens are very toxic and poisonous. Their inhalation can result in choking and death of a person. Hence, one should follow all safety procedures while storing or handling these elements.