Famous Mathematicians Who Have Left Their Impact on The World

Here's a look at some of the many math geniuses, who have helped shape the face of not just modern-day Mathematics, every facet of the present human civilization. 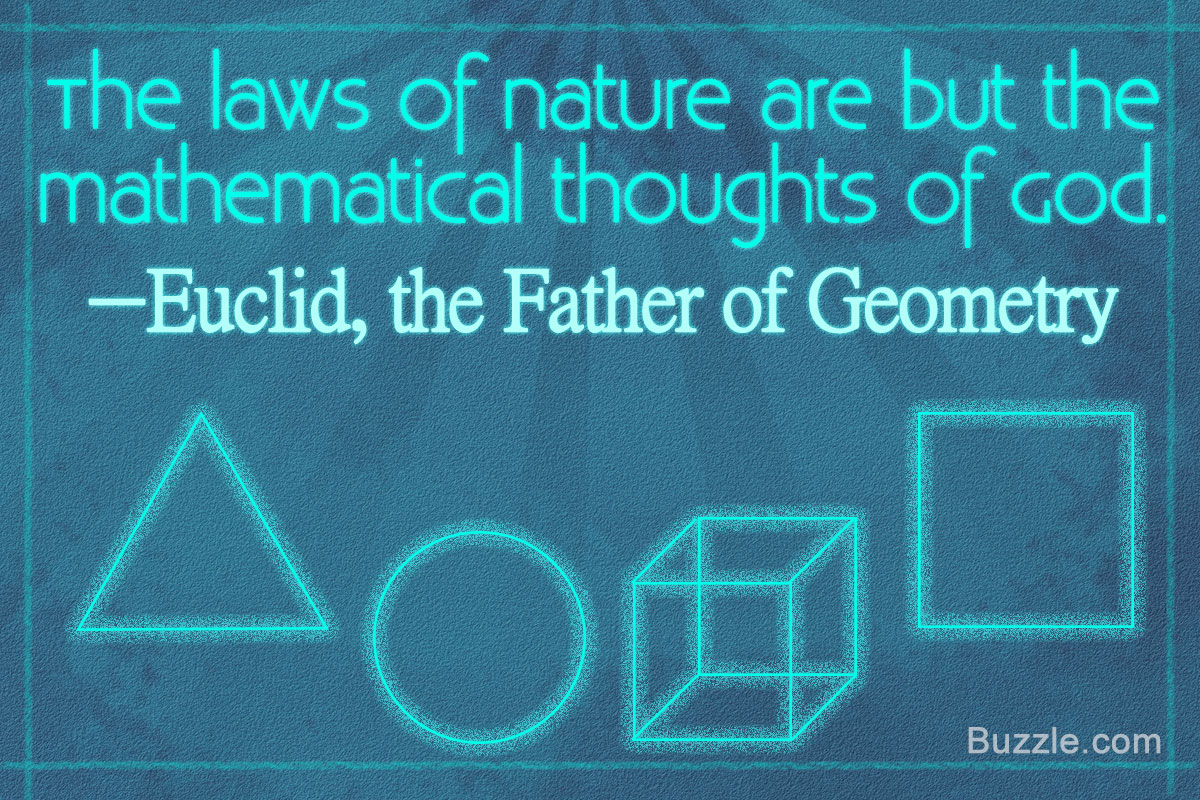 Here’s a look at some of the many math geniuses, who have helped shape the face of not just modern-day Mathematics, every facet of the present human civilization.

Just the thought of Mathematics may get most people scrambling for cover, while a select few may seem to be drawn to it like moths to the light. Whichever way you look at it, Mathematics sure gets a lot of attention from all of us. People have for long, pondered over the mysteries of Mathematics, and will rack their brains about it for generations to come. As hard as it may seem for us to understand its importance in our lives, we would be surrounded in chaos, without the alluring mystery (and may I add, one that has eluded me!) that is Mathematics.

While most of us may be ‘divided’ about just how mathematics helps us in our daily lives, if we are to but ‘deduct’ the fear, which seems to have ‘multiplied’ in our minds, we will see exactly how things ‘add’ up.

The silly wordplay aside, Mathematics is a very deep, and fascinating field, which governs our lives beyond an extent that we can ever comprehend. Over the centuries, many great minds have dedicated their lives to simplifying our world, and decoding the many mysteries about why things are the way they are around us. Here’s a look at some of the greatest brains of all time, and their many invaluable contributions to the field of Mathematics. 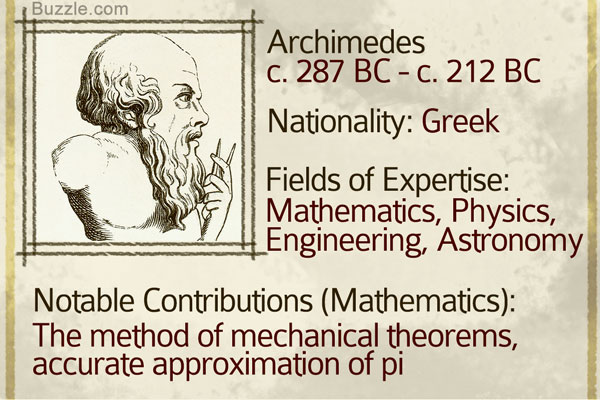 Arguably the greatest mathematician of all time, Archimedes had a pivotal role in shaping this field, especially Geometry. His famous works include a simple method to find the volume of surfaces of revolution, the use of indivisibles, and a very accurate approximation of the value of pi (π). He also designed a brilliant system to express large numbers. 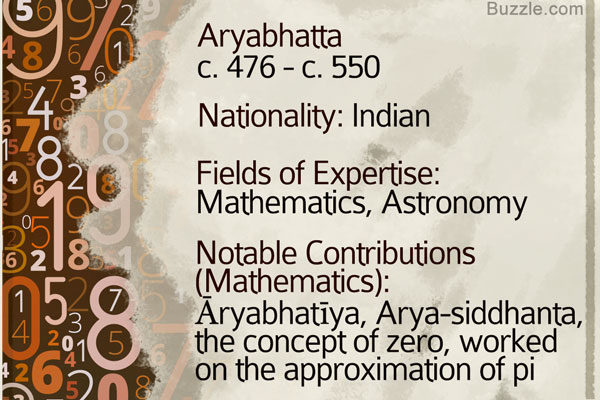 Aryabhata is amongst the most prominent of Indian mathematicians of all time. His contributions to the field of mathematics are unparalleled. He was a major influence in the fields of arithmetic, algebra, plane trigonometry, and spherical trigonometry. He also worked on the approximation of pi (π). 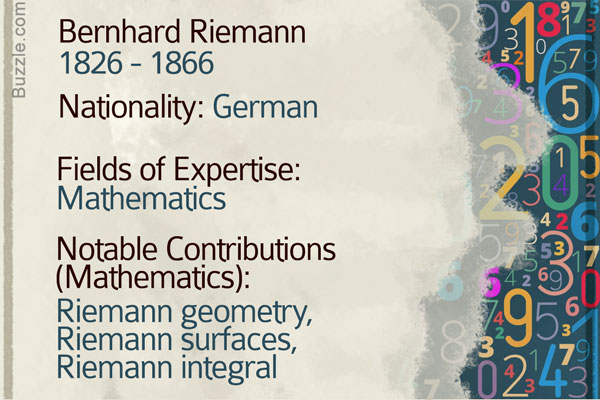 Bernhard Riemann was a very successful mathematician of the 19th century. His most well-known work is the Riemann Hypothesis, which deals with the distribution of prime numbers. He played a vital role in the field of analysis, number theory, and differential geometry. 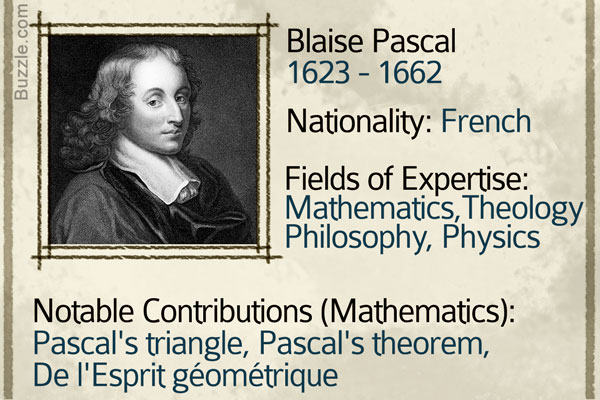 Blaise Pascal is credited with building the first mechanical calculator (pascaline) of the 17th century. He published an essay on conic sections using the methods of Gerard Desargues. Pascal was amongst the first few people to put probability to practical use. 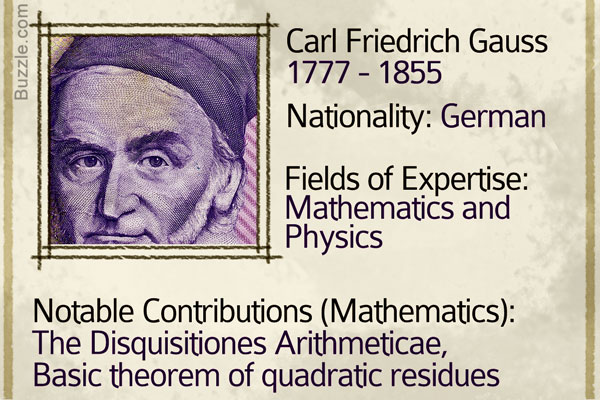 Often referred to as the ‘Prince of Mathematicians’, Carl Gauss has had a very important role in shaping modern-day Mathematics. His popular works include the Disquisitiones Arithmeticae, which is probably the greatest book on pure mathematics. He has also made significant contributions in the areas of number theory, and in predicting the orbit of comets and stars. He has probably proved the most number of theorems, and greatly improved upon them. 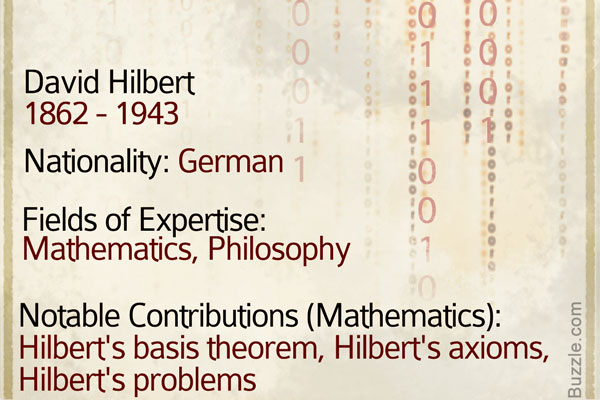 David Hilbert is considered to be one of the most influential mathematicians of the 19th century. He played a pivotal role in founding the proof theory and mathematical logic. He was also amongst the select few people of his time, who could differentiate between Mathematics and Metamathematics. Also, he greatly contributed to the fields of invariant theory and the axiomatization of geometry. 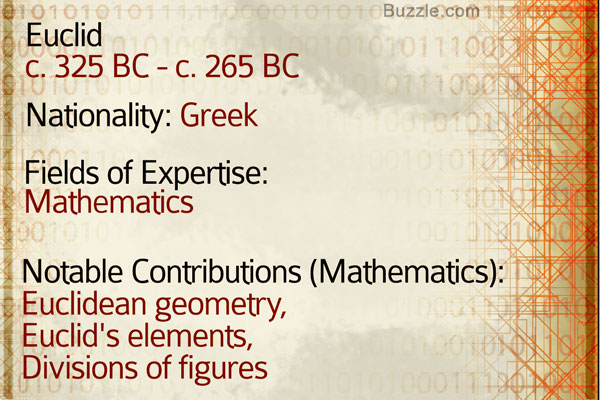 Greek mathematician, Euclid, is often called the ‘Father of Geometry’. His work, Elements, consists of 13 books, and is one of the greatest works about Mathematics. He came up with the principles, that are now called Euclidean geometry. His works also included number theory, spherical geometry, conic sections, and perspective. 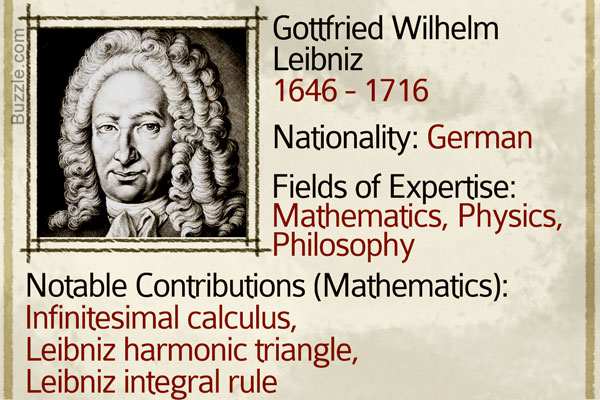 Leibniz is among the most regarded mathematicians of all time. He developed his own notations in calculus to represent infinitely small increments of x and y. Also, he independently developed infinitesimal calculus. He helped refine the binary number system. 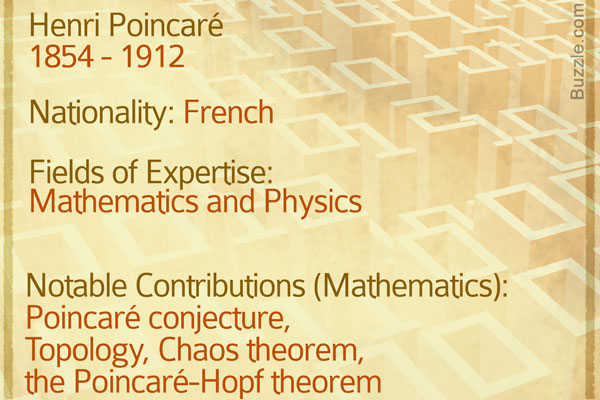 Henri Poincaré was one of the greatest French mathematicians of all time. He was instrumental in shaping the fields of pure and applied mathematics. He formulated the Poincaré conjecture, and laid the foundations for Topology. Also, he helped form the modern chaos theory. 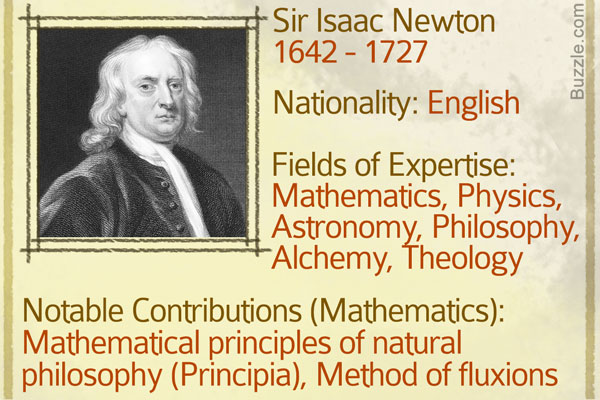 One of the greatest thinkers of all time, Sir Isaac Newton, greatly contributed to the field of mathematics. His works include the famed Principia, considered to be one of the most important scientific books ever written, and the Method of Fluxions, which explained the principles of differential calculus in great detail. 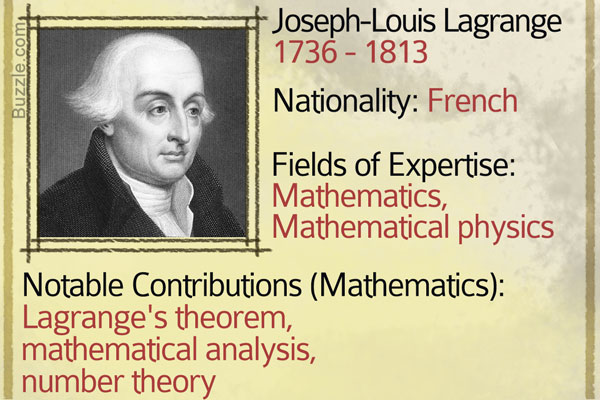 Lagrange was one of the cornerstones of the field of calculus of variations. He, along with Euler, worked on simplifying the equations of variational calculus. His contributions to the field of number theory are also noteworthy. 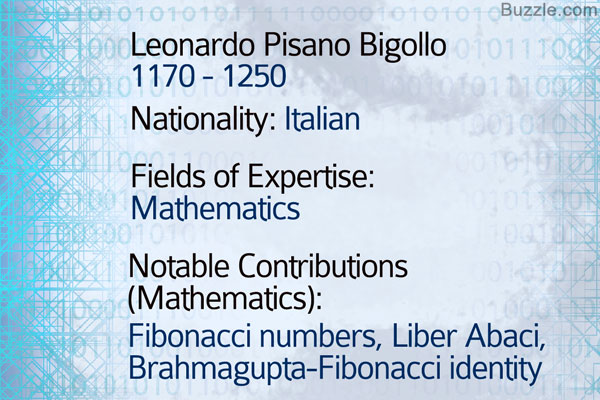 One of the greatest minds of the 12th century, Bigollo was commonly called Fibonacci. His book, the Liber Abaci, is amongst the best-known books on arithmetics ever written. His biggest contribution came in the form of the Fibonacci numbers, which simplified the sequence followed by a typical integer sequence. 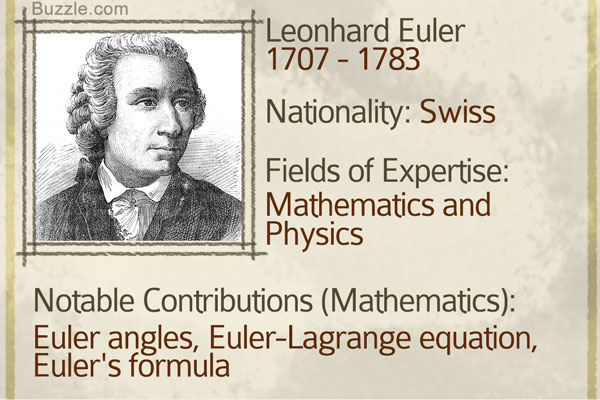 Swiss mathematician, Leonhard Euler was one of the most prominent mathematicians of the 18th century. He has greatly contributed to the areas of geometry, infinitesimal calculus, trigonometry, algebra, and number theory. He invented the graph theory, and laid the foundations of modern trigonometry. 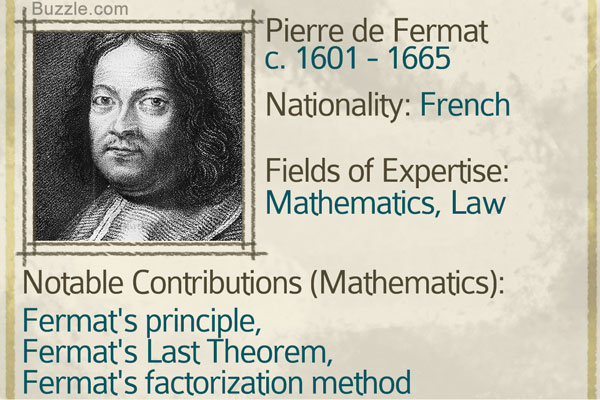 A prominent mathematician of the 17th century, Fermat was also a lawyer at the Parlement of Toulouse, France. He was among the first few people to use the power functions of integers. He also worked on improving the values of maxima and minima. 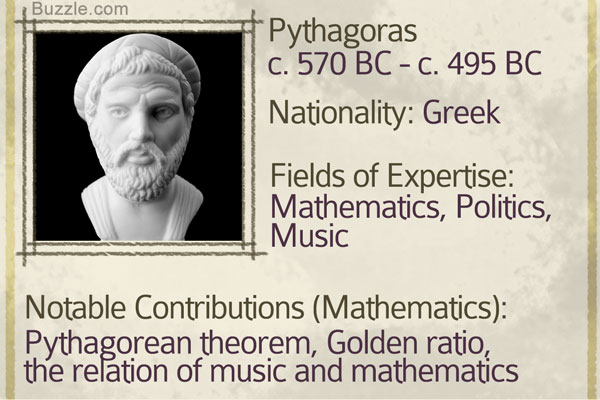 Pythagoras, is a name synonymous with Geometry. His works in the field of Mathematics have been great and varied. He formulated the Pythagorean formula, Pythagorean theorem, among other contributions in the field.