Amazing Facts and Statistics About the 1989 Loma Prieta Earthquake

The Loma Prieta earthquake of 1989 left over 63 people dead, injured thousands of others, and caused widespread harm to property and the environment alike. In this ScienceStruck post, we will provide facts and statistics about this earthquake and the effects of the same. 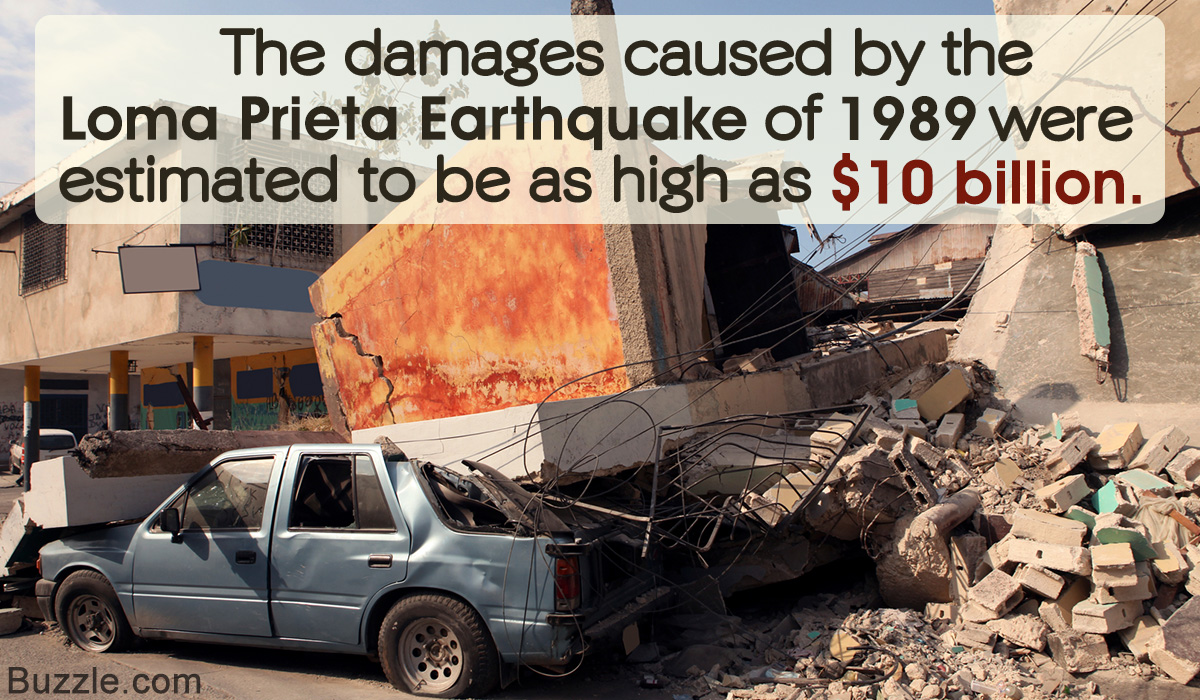 The Loma Prieta earthquake of 1989 left over 63 people dead, injured thousands of others, and caused widespread harm to property and the environment alike. In this ScienceStruck post, we will provide facts and statistics about this earthquake and the effects of the same.

The earthquake was named after Mt. Loma Prieta which is located in the Santa Cruz Mountains.

The earthquake not only led to a high number of deaths and loss of property, it also led to a negative impact on the environment. In this ScienceStruck article, we will look through the details of this earthquake, with special focus on the impact, effects, and statistics about the same.

Facts About the 1989 Loma Prieta Earthquake

◀ The tremors were felt for a duration of approximately 20 seconds.

◀ It led to the death of 63 people, and a further 3,757 people were reported injured. In addition to these numbers, 12,053 people were displaced.

◀ The epicenter of the quake was established on the San Andreas fault, which is roughly 10 miles northeast of Santa Cruz and 56 miles south of San Francisco. The Loma Pieta quake was felt as far as Western Nevada and San Diego.

◀ The focal depth was recorded at 11 miles, and the quake ruptured the southernmost 30 miles of the break that had caused the 1906 San Francisco earthquake.

◀ The aftershock zone stretched on for 25 miles, from south of Watsonville near Highway 101 to north of Los Gatos near Highway 17.

The San Andreas Fault forms the boundary between the Pacific and the North American Plate. The land to the West of the fault has been moving in the northwest direction, relative to the land on the east. This has been happening for millions of years, moving at an average rate of 2 inches per year. This motion occurs in sudden jumps during large earthquakes. During the Loma Prieta earthquake of 1989, the Pacific Plate moved 6.2 feet to the northwest and 4.3 feet upward over the North American Plate.

◀ Statistics suggest that the damage caused by the Loma Prieta Earthquake was one of the worst in the history of the country. The total damages were estimated to be as high as USD 10 billion―accounting for direct damages at $6.8 billion, and the rest brought on due to business interruption.

◀ Other notable damages included the collapse of a part of the roadbed on the Bay Bridge (it was unusable for a month after), the collapse of the elevated Cypress Structure section of Interstate 880 (in Oakland), and severe damage in downtown Santa Cruz and the Marina district of San Francisco.

◀ Due to the quake, the World Series between the San Francisco Giants and Oakland Athletics was postponed for 10 days.

◀ The earthquake led to the process of liquefaction, mostly in the Marina district of San Francisco where the structures were built on loose and sandy soil, and had a high percentage of water. Liquefaction is a process wherein, due to the constant shaking motion and the weight of the buildings, the water is squeezed out from the soil, and it causes the soil to temporarily develop a liquid consistency―similar to quicksand. As a result of which, the buildings toppled over and collapsed. This was one of the worst effects of the Loma Prieta earthquake of 1989.

◀ As far as the environmental impact of the earthquake was concerned, the direct result was the occurrence of more than a thousand landslides and rockfalls. These occurred in the epicentral zone in the Santa Cruz mountains. In one of the landslides caused on the State Highway, traffic was disrupted for over a month.

◀ In days leading to the quake, the scientists had noticed changes in the magnetic field and the radio signals in the Santa Cruz mountains. In fact, geologists had forecast a major earthquake in the area. This they based on historical data, especially the lack of a seismic event along the San Andreas fault since 1906―which was when the 8.3 San Francisco earthquake had taken place. 83 years prior to the quake of 1906, there had been 7 damaging earthquakes of magnitude 6.5 or greater, whereas only 2 had occurred since then. There were several seismic events measuring 5.0 or greater, that had been recorded in the two years preceding the Loma Prieta earthquake―these had also served as sufficient warnings.

Please note: All the statistics have been collected from the Department of Conservation, California.

Even though the Loma Prieta earthquake led to severe damage, scientists say that there is still a 50% chance for one or more earthquakes (of magnitude 7.0) in the San Francisco Bay Area in the next 30 years. The probability of a repeat of the 1906 quake is also quite significant.