The Fascinating Concept of Distance Decay Explained With Examples 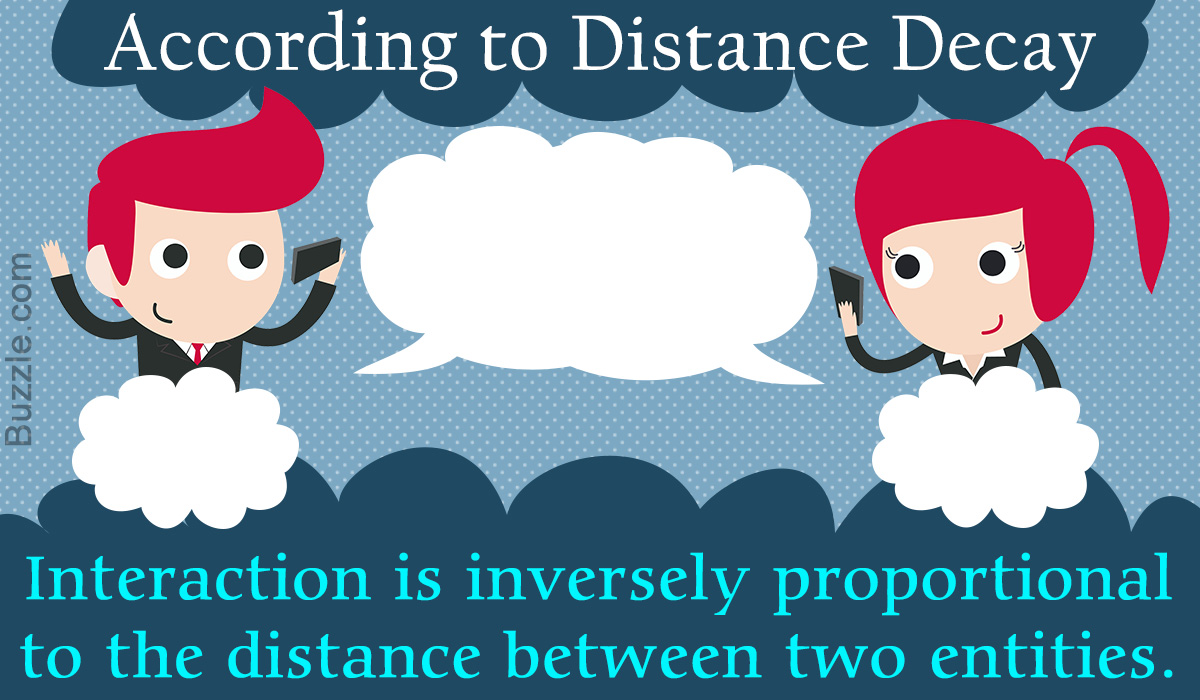 ‘Out of Sight, Out of Mind’, goes the famous adage. But there are deeper concepts which are embedded in this old saying. We shall endeavor to understand the meaning of ‘Distance Decay’, a complex phenomenon, with the aid of some examples.

Tobler’s first law of geography states that, “Everything is related to everything else, but near things are more related than distant things.”

There is a rate at which the interaction between the elements keep reducing, with an increase in the distance between them. This rate is known as the Distance Decay Function.

Distance Decay: Explanation With An Example

Let us consider the following scenario:

We shall assume that there is a departmental store that has been recently erected for the people within a block. The group of people who reside closest to this store are the probable customers, who would be loyal consumers. We shall call them Group I. The distance between the store and Group I is 1 mile.

Now, let us suppose that there comes up another store which is set up very close to Group III. Hence, these customers who used to visit the first store after commuting 2 miles will no longer choose to travel and go to that store. They would rather opt for the new store which is at a stone’s throw from them. Group II will have two options at hand, as their distance from both the stores are approximately the same. Hence, they wouldn’t be loyal consumers of either stores.

Group I is certainly a bunch of loyal customers of the departmental store, as their distance from the store is lesser as compared to the distance between them and the newly erected store. Hence, apart from the availability of the products, what consumers consider is the time and cost that would be invested in shopping.

This phenomenon is known as the effect which is posed by Distance Decay. The immediate effect being a decline in the interaction of two elements which are separated by large distances.

* As entities are separated by large distances between them, they are segregated.
* There is loss of activities which surface up as decline in trade and commerce between them.
* Lack of cultural and social exchange, and an overall loss of communication.

Understanding Friction of Distance With Examples

There is always a decrease in interactivity owing to an increase in distance. This distance is heightened, and refuses to decrease without the application of external factors. These factors can be financial, or the supply of energy of some form to decrease the distance. This results in friction of communication, which is known as Friction of Distance. It represents the amount of distance that may affect the interaction of two individuals. One burning example of this phenomenon is migration that takes place. Distance is directly responsible for the migration of people. Due to increased distances, the process of migration is affected. This means that, if the distance between two places increases, the interaction between the occupants of the places would be on the lower side.

As an example, let us take two acquaintances who live nearby. Their distance from each others home is only a mile. Now, let us consider that either of the friends got transferred elsewhere, and now their distance has increased by three miles. Thus, the result would be a decrease in their interaction. Now, to increase the interaction between them, there ought to be facilitators of communication. They must have an access to communication between their places.

Lets us also consider another example that would lend more clarity to this concept.

We also know about the migration of individuals from their native location to bigger cities in pursuit of employment. So, the factor of earning a livelihood is so demanding, that the person decides to migrate. But, on the contrary, if he bags a similar job where he can reside at home and still earn substantially well, he wouldn’t mind letting go of his previous employment. So, his purpose of migration is curbed.

Distance decay can be very actively found in human geography. This means that, the behavior of humans is subject to change owing to their geographical location and space.

Spatial Interaction is yet another phenomenon of distance decay. This term was given by Ullman, a geographer from America. It is the flow or movement of people, resources, information, labor, and services between geographical areas. This increases interactivity and interdependence between these geographical regions. The ‘distance effect’ is the direct and immediate result of distance decay. This may be understood as the change in a pattern or a process.