Types of Survivorship Curve with Examples

Survivorship curves shows the decline of individuals with age. It can help us to know about various aspects such as life expectancy and age-specified survival of a particular species. This ScienceStruck article elaborates on the different survivorship curves with a few examples of each, and also shows you how to create a survivorship curve on a spreadsheet in a stepwise manner.

Survivorship curves shows the decline of individuals with age. It can help us to know about various aspects such as life expectancy and age-specified survival of a particular species. This ScienceStruck article elaborates on the different survivorship curves with a few examples of each, and also shows you how to create a survivorship curve on a spreadsheet in a stepwise manner.

Living in a Continuum

Although we have spoken about the three distinct types of survivorship curves, such distinct demarcations never exist in real. Survivorship exists as a continuum, with type I and type III being extremes of that continuum.

A population can be defined as the total number of individuals that belong to the same species and inhabit a particular geographical region with the capacity to interbreed only amongst themselves. The term “population” can be defined using two parameters: density and dispersion. Density of a population can be explained as the number of individuals of a species per unit area. Population dispersion is how the density of the population is spaced out in a particular area. The rate of increase of a population depends on many factors like death rate (mortality rate), birth rate (natality rate), immigration, emigration, etc.

Not all individuals of a population survive to reach a particular age. A survivorship curve is basically a graph that shows the number of individuals of a species or a particular group that survive at each age. In simpler words, it traces the decline of a group of individuals over time. Survivorship curves help us to determine various evolutionary strategies of different species. It also helps us in understanding how the population density of a species is maintained. In this, the age of the individuals is plotted on the X-axis and the log of the total number of individuals surviving at each age is taken as the Y-axis, on a semilogarithmic graph. According to the curve that is generated, we may be able to comment on the rate of survival and the evolutionary strategies undertaken by the species or the group.

Survivorship curves can be broadly classified into three basic types:

Examples: Many large animals including humans (basically almost all mammals) and rotifers exhibit this type of survivorship. 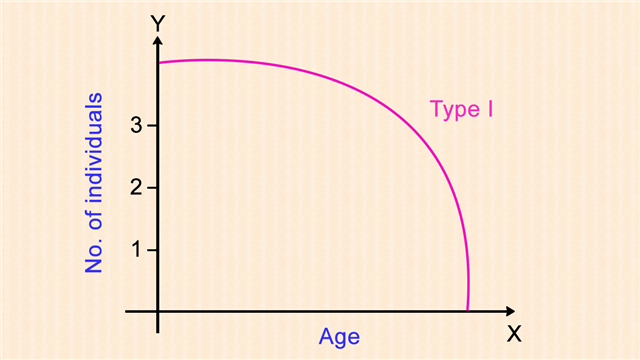 This type of curve is a linear or a diagonal type of curve. In this type of survivorship, the rate of survival of the individuals remains the same throughout their lives. This also implies that their mortality rate remains constant at every age. These individuals exhibit a strategy that is intermediate to type I and type III survivorship. This type is largely theoretical.

Examples: Many birds, mice, and rabbits exhibit either slightly sigmoid or concave curves that are very similar to a linear curve. Some animals like hydra, gull, and the American robin exhibit a linear curve. 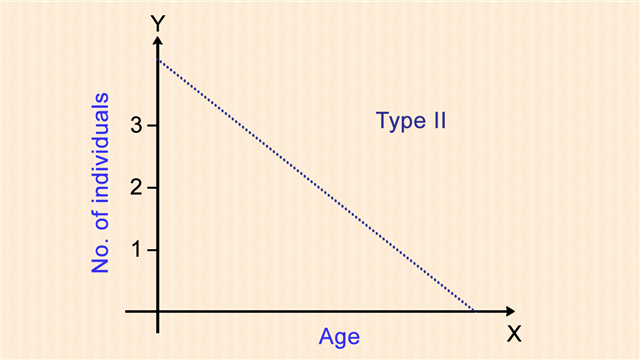 This type of curve is a highly concave curve. In this type of survivorship, the rate of survival is very low in the early ages of the individuals and increases comparatively later in their lives. Again, this implies that their rate of mortality is quite high in the early ages and may decrease comparatively in their later lives. In order to compensate for this, these individuals produce a large number of offspring. As a result, the offspring receive very little parental care. This strategy of these individuals is said to be the r strategy.

Examples: Some birds, black-tailed deer, oysters and other shellfish, some insects, and oak trees exhibit this type of survivorship curve. 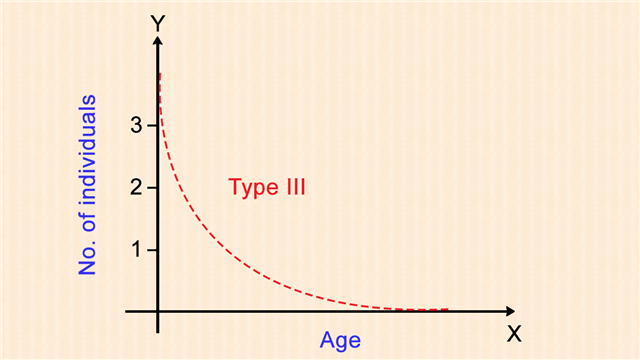 How to Make a Survivorship Curve

You can construct a survivor curve in the following few steps. Your survivorship curve will be as accurate as the data you have recorded. This can also be used to check the accuracy of the data.

Open a new spreadsheet and fill in the heading and the columns as given in the table. Do this by selecting the cells and type in them.

These are the data that have been recorded for each of the survivorship curve and is called survivorship schedule, every entry is the number of survivors at each age.

Enter the formulae used to calculate the standardized survivorship, given as lx, in column E (E3-E14)

This part of your spreadsheet work is complete; make sure to save this data before you proceed. Make a graph of the standardized survivorship (lx) vs. age.

◆ Hold the control key and Select the cells E2-G14.

* Source: Data is obtained from the University of Vermont

Change the Y-axis to a logarithmic scale.

◆ Double click on the Y-axis and choose the ‘number’ tab from the dialog box that appears.

◆ Set the number of decimal places to 3.

◆ Choose the ‘scale’ and select the box for Logarithmic Scale.

* Source: Data is obtained from the University of Vermont

There you have a survivorship graph created by you. Kudos!