Difference Between Bioaccumulation and Biomagnification 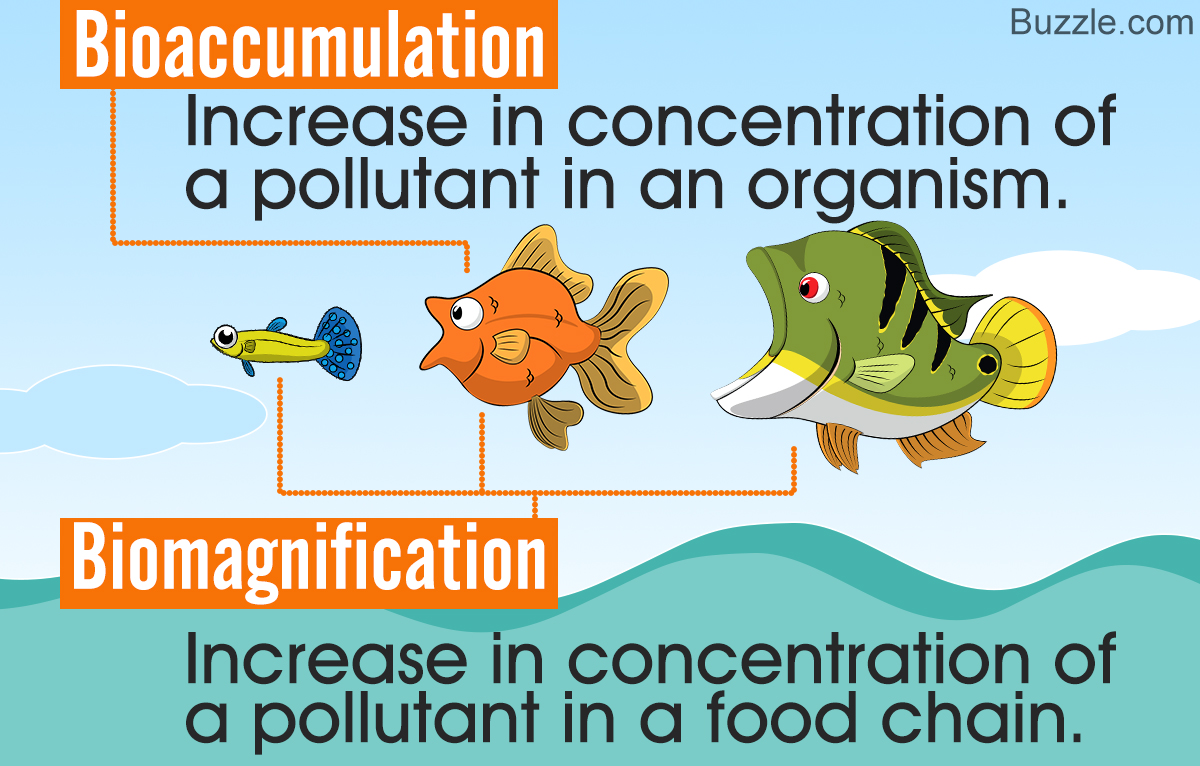 Despite the fact that both revolve around the build-up of toxic substances in the bodies of organisms, bioaccumulatiion and biomagnification are two different concepts.

Mercury bioaccumulation in fish is a cause of concern, as mercury is also known to bioaccumulate in humans, and fish is an important constituent of our diet.

Harmful chemical compounds used during World War II to control the mosquito population in areas where the US army was fighting, gave a boost to the idea of using it on crops for pest control. Over the course of time, its use increased manifold, and organisms that came in contact with it had to bear its brunt in the form of various health problems. These problems were primarily traced to two things: (i) bioaccumulation and (ii) biomagnification.

Both, bioaccumulation and biomagnification trace the movement of pollutants through the various trophic levels in an ecosystem … in food chains and food webs, to be precise. In a food chain, energy transfer takes place when a particular organism feeds on the organism at the subsequent trophic level. However, it’s not just the energy that is transferred in this process. Even the pollutants ingested by organisms at the subsequent trophic level are transferred.

Bioaccumulation refers to the increase in concentration of a pollutant in an organism. It usually occurs when an organism ingests a particular substance at a faster rate than it can metabolize or excrete. While most organisms are contaminated as a result of consuming contaminated food, others―aquatic species in particular―absorb contaminants directly from the water, in what is known as bioconcentration.

An apt example of bioaccumulation will be phytoplankton and other microscopic organisms absorbing pollutants like lead, and mercury, and storing it in their tissues.

Biomagnification refers to the increase in concentration of pollutants as they move from one trophic level to the next.

An apt example of biomagnification will be when small fish eat contaminated microscopic organisms, and big fish eat the small fish. So, first, the pollutants are transferred from microscopic organisms to the small fish that feed on them, and then to the big fish that feed on these small fish. As the burden of pollutants is passed from one organism to another, it gets amplified, and thus, biomagnification is also known as bioamplification.

In essence, biomagnification is a higher level biological process compared to bioaccumulation. One may ask what harm can small concentrations of pollutants in the environment possibly do? The answer will be a significant harm, considering that the concentration of these pollutants increases as they make their way up the food chain, eventually reaching a level where they can cause health problems in organisms. The longer the food chain, more vulnerable it is to the biomagnification process. It’s also worth noting that tertiary and quaternary consumers are more susceptible to it than secondary consumers.

The pollutants involved in bioaccumulation and biomagnification include pesticides, that reach water as a result of surface runoff; as well as industrial chemicals, which are released in the environment―intentionally in most cases.

Interestingly, some specific traits are associated with these pollutants. For instance, all of them have a considerably long life, as a result of which they are not broken down easily. That they are fat soluble also adds to their longevity. Longer their life, longer they will stay in the ecosystem.

In summary, both are related to transfer of pollutants from one level of the food chain to the other, but bioaccumulation is restricted to an organism, whereas biomagnification occurs across the food chain.