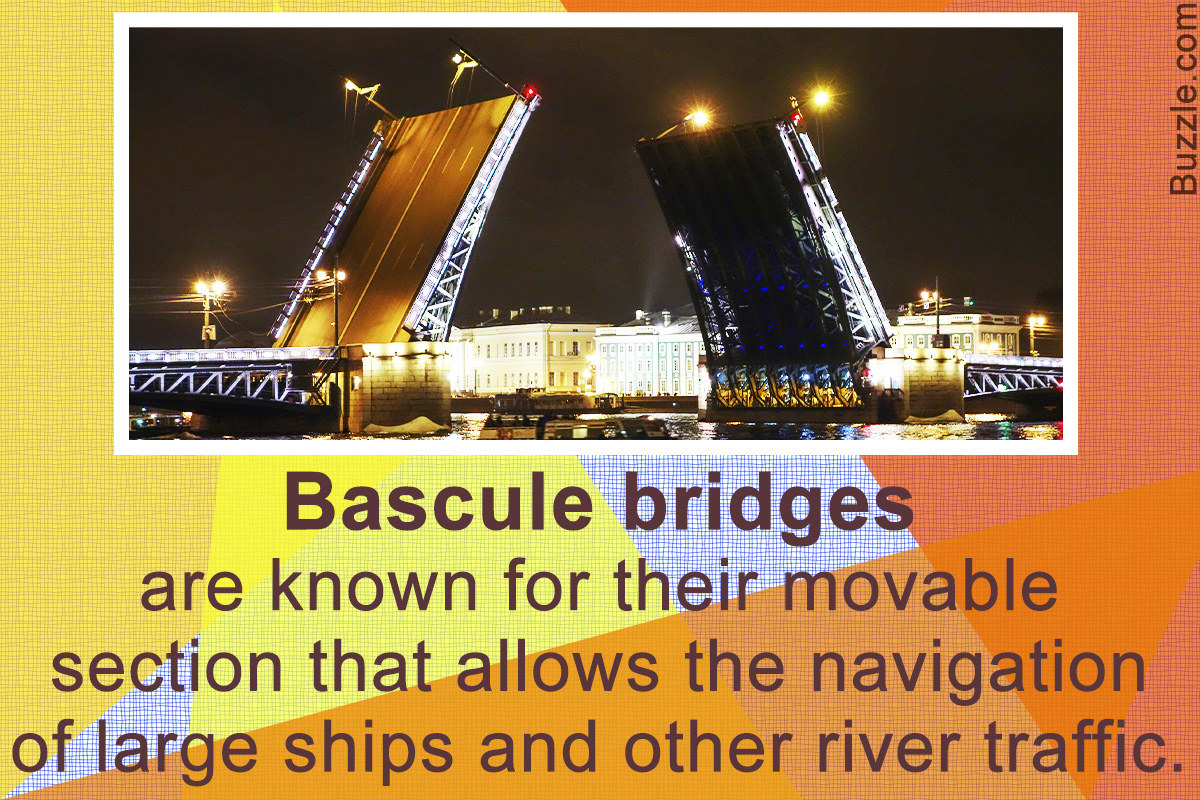 Bascule bridges when compared with other types of movable bridges, are the most popular and commonly found.

The famous Tower Bridge in London is a combination of bascule and suspension bridge, and is considered as an iconic symbol of the city.

Bascule bridges are a type of movable bridge. That is, these bridges have a movable section that rises upwards (on a horizontal axis) to open up and allow the navigation of large ships and other water traffic. The movable section or the portion that rises is counterbalanced by a weight. The term bascule in French means see-saw, and the operation of a bascule bridge is based on the same principle.

Also called balance bridges or counterpoise bridges, they are the most commonly found movable bridges. They are more common as compared to the other types, mainly due to their quick opening motion and operation that involves the use of lesser energy. They are mainly made of concrete or steel. The mechanism involved in such bridges is generally a rack-and-pinion gear arrangement operated by electric motors.

It is believed that these bridges came into existence, mainly to defend or guard castles and towns in medieval Europe. Back then, these were operated by a winch and a counterweight. Moreover, it is also said that a part of the Old London Bridge was a bascule and functioned in the same manner of rising up to allow the passage of tall-masted ships. Later in the 19th century, the main reason and only purpose for building these bridges was to allow navigation of large ships and other water traffic.

Bascule bridges have sections that are referred to as a ‘span’ or ‘leaf’, that are capable of being moved or rotated vertically on a horizontal axle-like pin (trunnion). These bridges can be designed as single-leaved or double-leaved. By the name itself it is understood that a single-leaf bascule consists of a single or one movable section covering the entire navigation channel. It consists of several connected components and its counterweights are situated above the bridge. Double-leaf bascule consists of double or two movable sections meeting at the center, and each covering half of the navigation channel. It is constructed in the same way as a single-leaf bridge, however, the counterweights are placed beneath the bridge in this case. Double-leaf bascule bridges are more common.

▸ These bridges have three versions or designs, which are the fixed-trunnion, the rolling lift trunnion, and the Rall type.

▸ A fixed-trunnion is one where the counterweights and bridge are on separate pivots.

▸ A rolling lift trunnion has a span base that is similar in appearance to the base of a rocking chair. Thus, here the span is lifted by rolling over the track.

▸ The Rall type is quite rare and its opening involves a combination of rolling lifts and longitudinal movements. 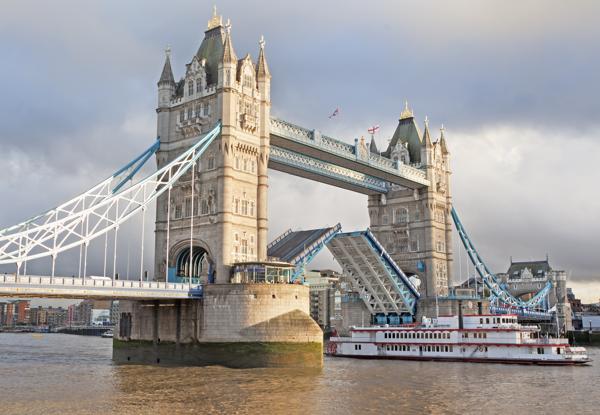 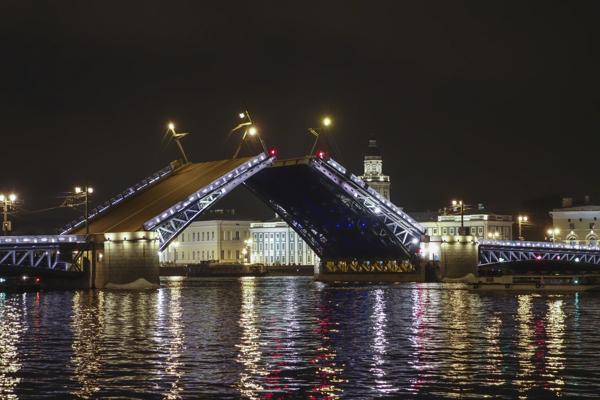 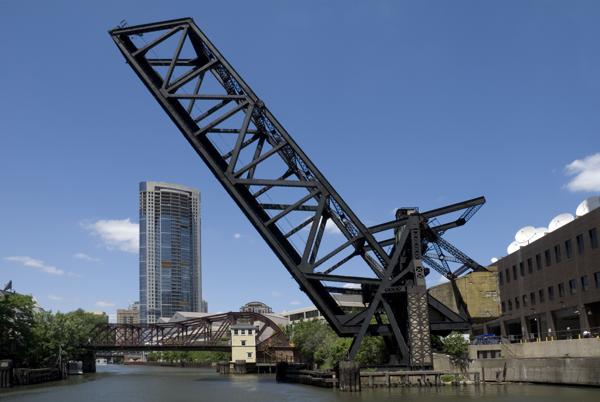 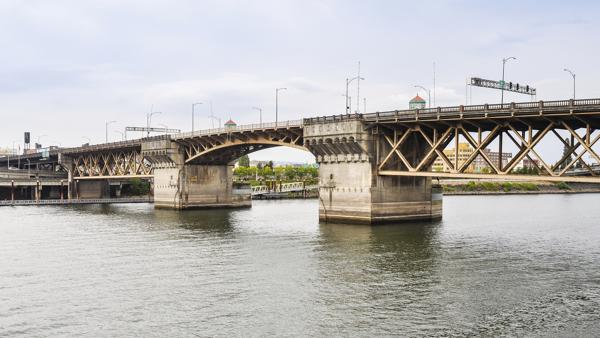 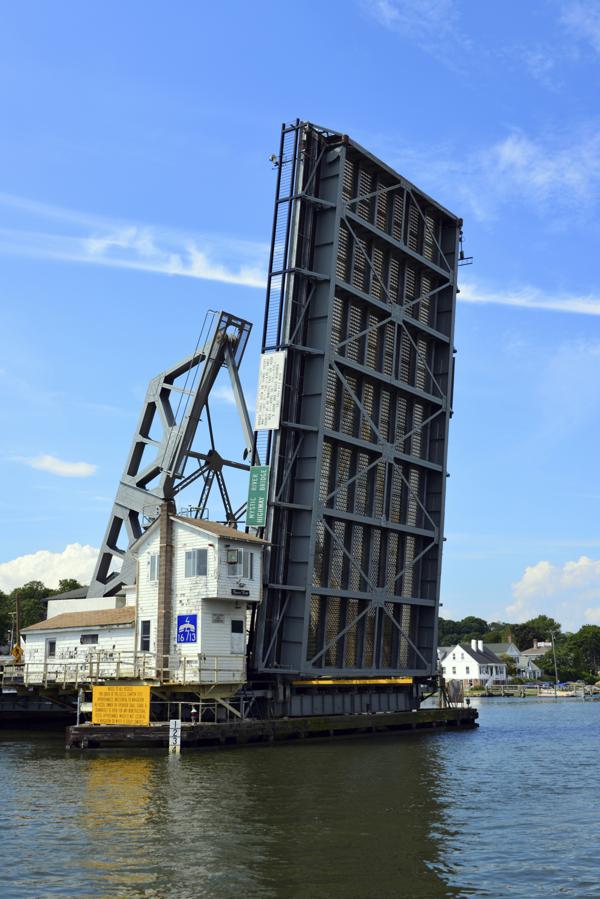 Here are some advantages of bascule bridges.

▸ It allows the navigation of river traffic by opening up.

▸ It does not take up much space.

▸ The cost of overall building is less.

Here are some disadvantages of this bridge type.

▸ The moving parts and their operation increases the cost of maintenance.

▸ They cause a hindrance in the flow of traffic when opening and closing. This applies to both the road or rail traffic that passes from above & the river traffic passing below.

▸ They require more maintenance and even a slight defect prevents the functioning of the bridge. This could serious consequences on traffic flow both crossing on and passing below the bridge.

At the start of the 20th century, many such bridges were built in the United States. These are currently in use and are either being renovated or replaced. There are some improvements that can be considered for building a bascule bridge. They include the use of stronger and lighter materials, along with the application of advanced design techniques. This will further enable the bridges to be built higher above the water, thus allowing large vessels to easily pass from below. This in turn will avoid the frequent opening and closing of the bridge. The spans can be raised to a lesser degree as compared to those of the older designs. The implementation of hydraulic operation instead of being driven with gear mechanisms will also help improve their overall design.