A type of plate tectonic boundary, other than the convergent and divergent boundaries is the transform boundary. This ScienceStruck article provides information regarding this boundary is, along with its examples. 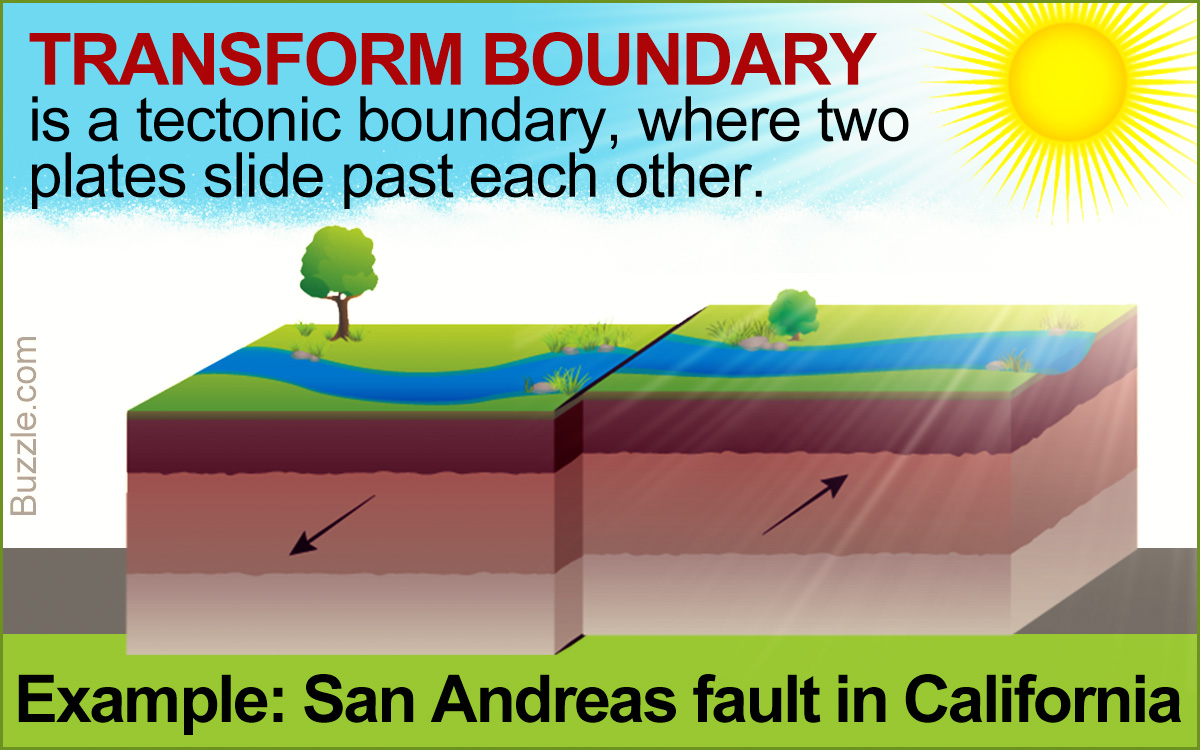 A type of plate tectonic boundary, other than the convergent and divergent boundaries is the transform boundary. This ScienceStruck article provides information regarding this boundary is, along with its examples.

What is a Triple Junction?

It is the region where three tectonic plates collide with each other. The Indo-Australian, Pacific, and Antarctic plates meet at the Macquarie Triple Junction south of New Zealand.

Plate tectonics have given the Earth’s surface its present shape. The interaction between landmasses and water bodies is guided by the activities in the Earth’s interior. Some such activities are responsible for the formation or destruction of geological features on land. However, some regions like the transform boundaries, which although tectonically active, are the silent revolutionaries, as they do not alter the shape of the Earth phenomenally.

It is a tectonic plate boundary, where two plates slide past each other horizontally, without forming or destroying the tectonic crust. It is also known as a ‘transform fault’.

Let us imagine that there are two divergent tectonic plates such that one plate is moving away from the other. (This occurs most commonly at a mid-oceanic ridge like the Mid-Atlantic Ridge in the Atlantic Ocean). The divergent boundary is not a straight line; however, it is zigzag and crooked.

Transform faults end at the junction of another plate boundary or another fault. They generally connect the segments of the diverging mid-oceanic ridges. They also connect two trenches at subduction zones (where one tectonic plate is going underneath another), or a ridge with a trench. They generally offset the spreading ridges on the ocean floor by zigzag plate margins. There are, however, a few transform boundaries that occur on continents.

They are also known as conservative boundaries, as no new crust (lithosphere) is created or destroyed.

It is a transform boundary formed on the west coast of North America in California. It is a continental transform fault. The Pacific plate is moving alongside the North American plate for millions of years. The fault joins the East Pacific Rise and the South Gorda – Juan de Fuca plate. The fault zone is around 1,300 km long and runs through the state of California. It has been divided into three segments of northern, central, and southern. The intensity and frequency of tectonic activity differs for every segment.

This fault zone is a part of western Turkey, in the Marmara sea. The Aegean-Anatolian micro plate is forced to move westwards due to the collision between the African and Eurasian plates. Earthquakes and other frequent tectonic activities is a characteristic of this region. The fault extends westwards up to the Karliova triple junction in eastern Turkey. The Californian San Andreas fault and the North Anatolian fault are both continental tranforms and have similar slip rates (how fast one side of the fault slips in relation to the other).

Situated in the Tierra del Fuego region, it is a transform boundary between the Scotia plate and the South American plate. It is located along the North Scotia Ridge that defines upper boundary of the Scotia plate. The narrow and linear valley formed by the Rio Turbio (the eastern tributary of the lake Lago Fagnano) is the evidence of the Magallanes-Fagnano fault system on the Earth’s surface.

In the Alaskan geologic zone, this is an active transform fault. The movement here is between the North American Plate and the Pacific plate. It further connects to the Fairweather Fault on Alaska’s coast. This also is an example of a triple junction, with the Explorer ridge and Cascadia subduction zone in the south forming the other two elements.

It is located in New Zealand’s South Island on the Australian and Pacific plate boundary. The formation of Southern Alps is attributed to the tectonic activity, including earthquakes along this transform boundary. The transform boundary belt runs along the western border of the Southern Alps. It further splits into smaller strike-slip faults. It aligns with the Macquarie fault zone in the southwestern part of the South Island.

Extreme tension is built up along the fault line. Tension when released due to plate movement leads to massive energy release causing earthquake. Linear valleys, linear ridges, or ponds and offset drainage channels are some landforms associated with the transform boundaries.