Desert Biome: A Definitive Guide to its Animals and Plants

Different deserts have their own characteristics that distinguish them from others. You'll find information about desert biomes and the plants and animals that inhabit them.

Home / Uncategorized / Desert Biome: A Definitive Guide to its Animals and Plants

Different deserts have their own characteristics that distinguish them from others. You’ll find information about desert biomes and the plants and animals that inhabit them. 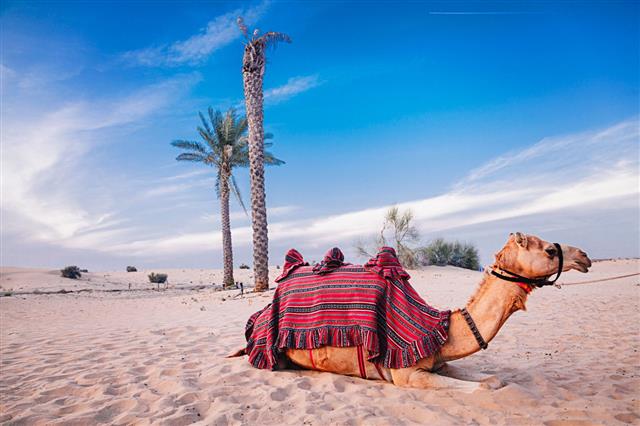 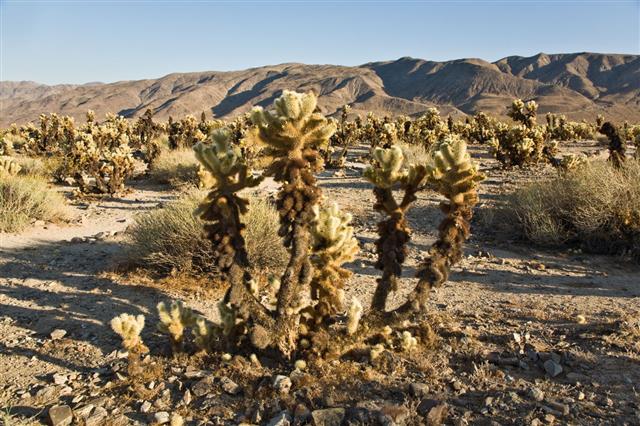 Deserts are found in areas where rainfall is less than 50 cm a year. Examples of such deserts comprise the Sahara of North Africa and the deserts of the southwestern parts of the U.S., Mexico, and Australia, that are situated at a low altitude. Others include the cold deserts in the basin and range area of Utah and Nevada, and in parts of western Asia. Some deserts have isolated areas of vegetation, which surround a similar water source or spring, where this feature is called a desert oasis.

Most of these deserts have a considerable amount of specialized vegetation, including a collection of vertebrate and invertebrate animals. There are only a few large mammals in these deserts because they are not capable of storing sufficient water or withstanding the blistering heat. The desert biomes can be separated according to several features, in four major categories:Cold, hot and dry, semiarid, coastal.

The forelegs of a desert tortoise are muscular and flattened with long claws, which are adapted to dig deep burrows. Desert tortoises make popping, hissing, and poinking sounds when in distress or fear. They live in burrows to escape the cold and heat, and are subjected to infrequent rains that fall in the basin. Most of their water intake comes from moisture found in wildflowers and grass that they eat during the spring. The desert tortoise has the ability to store about a quart of water in its bladder to be used when necessary. It is considered a threatened species, thus, it is unlawful to touch, harass, harm, or keep a desert tortoise as a pet.

This frog, unlike its many relatives, develops a cocoon for storing water, where it nestles underground for most parts of the year. The water lasts long enough for it to sustain itself during the dry months of the year, where the rainy season allows them to leave their hiding place and lay eggs in puddles formed by the rain. The eggs then hatch within these puddles, growing soon enough before the water dries up.

The camel is the largest animal of the desert. This animal has the ability to store large amounts of water for a long time, and because of that, it is able to survive in the dry and harsh desert. Camels are a nomad’s and desert traveler’s main mode of transportation. These animals have transparent eyelids that enable them to keep sand out of their eyes.

Kangaroo desert rats live in large dens with wide openings leading into them. It is a very cute critter that resembles a mini-kangaroo, but is only as large as a mouse. It has hair that is buff in color at the top, and white at the bottom. The tail of the desert rat has a white tuft at the end. This animal has adapted its body by getting water from the food it consumes. It also has a cheek pouch in which it can store food for weeks. The desert kangaroo rat is not an endangered species.

The Thorny Devil, as this Australian lizard is called, is a fascinating species, where they direct raindrops into their mouths during rainfall, using the spines on their head. Animals tend to adapt themselves to their surroundings, and the Thorny Devil has its own one-of-a-kind way of surviving the arid desert.

This is a shrubby plant that is able to grow up to 30 inches high. It has stems that are gray-green in color and long silverfish-green, narrow, hairy leaves. This desert plant has narrow purple flowers with lavender rays surrounding a yellow disk-like center, which grows up to 2 inches in diameter. Unfortunately, this desert plant dies soon after flowering.

This desert plant comes in many varieties like the Hedgehog cactus, Claret Cup cactus, King’s Cup cactus, Pancake Prickly Pear cactus, and the Mound cactus, to name a few. The stems are cylindrical in shape and grow up to 1 foot long and 1 to 1½ inches thick. It has about 9 to 10 ribs on the stem. The flowers of this beautiful plant are deep-red in color with an arrangement of petals that form the shape of a cup. It has fruit too that are also red in color, and are edible. The cactus takes advantage of the cool night air to exchange oxygen and carbon dioxide. The most common kind found in American deserts are the Barrel cacti, that are easily identifiable from their bulbous, round shapes, which are surprisingly
quite huge when seen in person. This unique plant blossoms red flowers, or yellow-green varieties that grow at the top, turning it into a pretty sight for those who come across its kind.

This desert plant is a 10-18-foot-tall plant with palm-tree-like leaves, that grow at the bottom of the plant. The soaptree yucca gets its name because of the presence of a soap-like material inside the roots and the trunk of the plant. This plant is also used for decoration in many American gardens.

The flowers of this plant are quite a sight to take in, with its yellow flowering that brings a splash of color to an otherwise bleak desert backdrop. Related to the sunflower family, these miniature versions of their cousins are not far from being just as pretty and eye-catching. It has long stems, with the flowers placed right above a white layer of leaves, with disk-corollas that range from a dark yellow-orange hue, to a purplish one.

This interesting species of desert plant life is one that needs to be approached with caution, even if its innocuous facade seems appealing. From a distance, the Jumping Cholla looks like a fuzzy arrangement of furry outstretched arms, when on close inspection are actually silver spines. The spines disconnect from the plant even if gently touched, proving to be quite a painful experience for those who brush up lightly/accidentally against them. Even those littering the ground around the plant will tend to attach themselves to anything that may walk past it, being lightweight in nature. The flowers that grow on this plant erupt at the ends of the stem, where it also bears fruit that is more often than not, covered with spines.

Deserts can be classified into 4 main types depending on the altitude, location and rainfall, namely: cold deserts, hot and dry deserts, coastal deserts, and semi-arid deserts.

The deserts that are in Greenland, Antarctic, and the Nearctic ecozone, are called cold deserts. These deserts are characterized by cold winters with snowfall and high overall temperatures throughout the winter, and sometimes in the summer too. The mean winter temperatures in a cold desert falls between -2 to 4°C, and in the summer, between 21-26°C.

The mean annual precipitation in cold deserts ranges between 15-26 cm. The soil in this area is salty, silty, and heavy. The plants in cold deserts are widely scattered and vary between 15 cm-122 cm in height. The main plants in these areas are deciduous, most of which have spiny leaves. Animals species found in the desert are jackrabbits, kangaroo rats, grasshoppers, pocket mice, and antelope ground squirrel. Deer are found too, but only during the winter.

Small nocturnal carnivores make up the animal life here. Animals like burrowers and kangaroo rats make up the dominant residents.

The sagebrush of Utah, Montana, and the Great Basin, along with the Nearctic ecozone, make up the semiarid deserts. Here, the summers are moderately long and dry with the winters bringing in a normal low concentration of rainfall. Plants and animals are benefited by the cool nights that reduce moisture loss from transpiration, sweating, and breathing.

Plants protect themselves in the semiarid deserts with the help of spines. These also help to shade the surface enough to reduce transpiration to a large extent. Some of them also have silvery or glossy leaves that allow them to reflect more radiant energy. Creosote bush, bur sage, white thorn, cat claw, mesquite, brittle bush, and jujube are the names of some of the plants found in the semiarid desert. Mammals such as rabbits, kangaroo rats, and skunks, along with grasshoppers, ants, snakes, and lizards, inhabit this desert.

The Nearctic and the Neotropical ecozones are home to the coastal desert. The average temperature in this area ranges between 13-24°C, with the temperatures dropping to 5°C and below, during the winter. The average rainfall measures 8-13 cm.

The soil in the coastal desert is fine-textured with moderate soil content, and is fairly porous with good drainage. The plants have thick, fleshy leaves or stems that can take large quantities of water when it is available, while storing it for future use. Some plants also have corrugated surfaces with longitudinal grooves and ridges. The salt bush, buckwheat bush, black bush, rice grass, little leaf horse brush, and black sage are some of the plants that thrive in coastal deserts.

This was all about the animals and plants found in a desert biome. As we can see, they are distinctive in their adaptive capabilities, just so they are able to survive in harsh conditions. 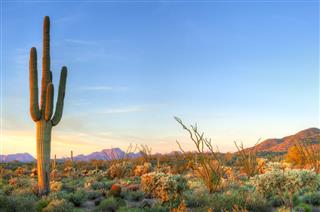 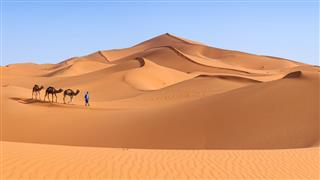 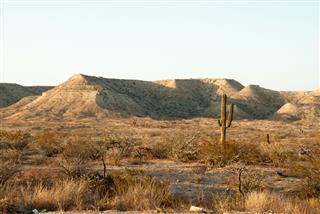 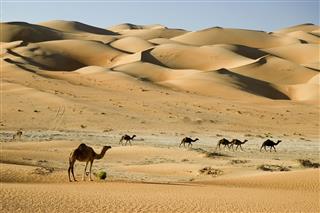 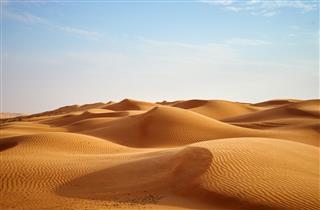