Read this article to gain more information about the uses and applications of the compound called copper sulfate.

Read this article to gain more information about the uses and applications of the compound called copper sulfate.

Copper sulfate, also known as ‘blue stone’ or ‘blue vitriol’, is a chemical compound that is used in a wide range of industries. The basic chemical formula of blue vitriol is ‘CuSO4‘, but the salt exists as a series of different compounds, depending on the degree of hydration. ‘Chalcocite’, the anhydrous form of copper sulfate, occurs as a rare mineral and exists as a pale green or grayish-white powder.

The various hydrated forms of copper sulfate include trihydrates, pentahydrates, and heptahydrates. However, copper sulfate pentahydrate (CuSO4.5H2O) is the most commonly found salt. It is bright blue in color and is known as ‘chalcanthite’. This color of the crystals is due to the presence of water of crystallization, and is the best way to distinguish between the anhydrous and hydrated forms.

Copper sulfate can be prepared in the laboratory by reacting various compounds of copper (II) with sulfuric acid. However, it is commercially available on a large-scale basis, and is an economic source of Cu. Copper sulfate pentahydrate readily dissolves in water and is also soluble in methanol, glycerol, and to some extent in ethanol. When the blue crystals of copper sulfate are heated in an open flame, they get dehydrated and turn grayish white.

Copper sulfate is a versatile chemical compound having a wide range of applications in agriculture, as well as pharmaceutical and chemical industries.

Apart from the above uses of copper sulfate, this compound is also used in preparation of wood preservatives to protect timber from wood worms. It is also utilized as a mordant in dyeing, and as a reagent in tanning process. Moreover, growing crystals of this salt is one of the common science fair projects for middle school and high school children. 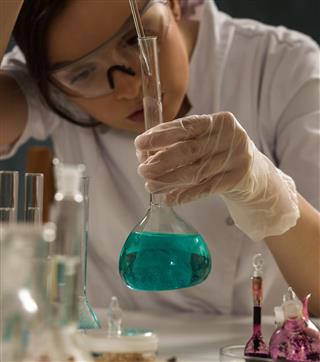 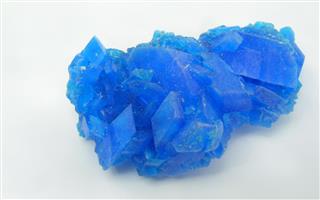