An Overview of Fascinating Symbiotic Relationships in the Taiga

Symbiotic relationships are very common among living species. We provide some information about such relationships in the taiga biome.

Home / Uncategorized / An Overview of Fascinating Symbiotic Relationships in the Taiga

Symbiotic relationships are very common among living species. We provide some information about such relationships in the taiga biome. 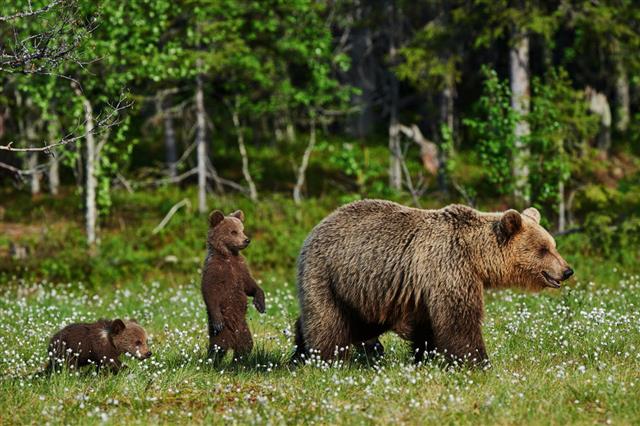 It has been suggested that the symbiotic relationship between feather moss and cyanobacteria is crucial for fixation of atmospheric nitrogen in the taiga biome.

Each ecosystem has numerous species of living organisms that interact with one another in different ways. Symbiosis is the collective term used to denote the long-term interactions between the living organisms in an ecosystem. In fact, the meaning of the word ‘symbiosis’ is ‘living together’. Though the term symbiosis is usually associated with mutualism, it includes other types of interactions like commensalism, parasitism, amensalism, etc. The organisms that share a symbiotic relationship are called symbionts.

Mutualism denotes a relation, wherein both the symbionts derive benefit from each other. For example, pollinators like bees and birds feed on the nectar of flowers, and in return they pollinate flowers. Thus, both species gain from the relation. Parasitism refers to a relation where one party benefits and the other is harmed. For example, parasitic plants live on host trees and derive food from the tree, thereby harming the latter. Commensalism denotes a relation in which one symbiont benefits and the other is neither harmed nor benefited. For example, cattle egrets are often seen with cattle. These birds feed on insects that are stirred up when the cattle moves. Cattle is neither harmed nor benefited from this relation. A fourth type of symbiosis called amensalism is divided into two types – competition and antibiosis. Competition is the relationship between animals that fight for food and other resources, in the same area. In antibiosis, one organism produces substances that can kill the other species.

The Clark’s nutcracker is a corvid that stores pine seeds in the ground for later use.

Most of the pine species have winged seeds that are dispersed by the wind. The boreal forest has numerous pine species that produce wingless seeds. Such pines depend on corvids like jays and nutcrackers, for seed dispersal. These birds feed on pine seeds that they collect and bury as a source of food for winter. However, many of the seeds remain buried and germinate during favorable conditions.

Certain types of fungi share a symbiotic relationship with algae, to form lichens. The algae live inside the fungal tissues and carry out photosynthesis to make food, which it shares with the fungi. In return, the fungi offer protection and supply the nutrients needed for photosynthesis. Fungi derive nutrients like carbon and nitrogen, by decomposing dead leaves. Lichen are abundant in the taiga biome.

Mycorrhizal fungi growing on the roots of a pine tree.

Mycorrhizal fungi grow on the roots of coniferous trees. The fungi decompose dead leaves, thereby supplying the trees with nutrients that are required for photosynthesis. In return, the trees provide food for the fungi to survive.

In taiga, grizzly bears share a symbiotic relationship with many plants. The bears enjoy the berries produced by the plants. In return, they help the plants by dispersing the seeds through their waste. Both the plants as well as the bears benefit from this association.

Pseudoscorpions attach themselves to brown bears, so that they get transported from one place to another. During cold weather, they ride on brown bears and reach the latter’s hibernation sites. The pseudoscorpions feed on small insects and spend the winter in those locations, while bears are not affected in any way.

These birds share a symbiotic relationship, in which owls benefit and the woodpeckers are neither harmed nor benefited. Woodpeckers make holes on trees and owls use these cavities for nesting. Likewise, trees provide home and food for squirrels. Though squirrels derive benefits from trees, the latter remain unaffected. The same applies to birds making nests on trees.

The forest tent caterpillar feeds on plants and causes damage to the latter.

Caterpillars are voracious feeders that spend most of their time eating. Forest tent caterpillars feed on the leaves, thereby causing harm to plants. Elks and caribous get affected with a nematode parasite called brain worm, which can cause severe symptoms and affect the life of the host. Moose and winter tick share a symbiotic relationship, wherein the moose is harmed, but the tick is benefited. The winter tick that is found on the skin of the moose sucks the latter’s blood, thereby harming the animal.

Red squirrels are often seen competing with one another for pine nuts.

Competition happens between animals that live in the same area. They may compete for food, shelter, water, or mates. In taiga, red squirrels can be cited as a classic example of this type of symbiotic relationship. They compete with one another and with some other herbivores for conifer seeds. In case of predation, the predator species kills and consumes the prey species. In taiga, bear is the predator and fish become the prey species. Another example is the Canadian lynx that preys on snowshoe

In taiga, the Canadian lynx is a predator species and the snowshoe hare is the prey species.

In short, symbiotic relationships can be seen in almost all types of biomes, including the taiga. Mentioned above are only a few examples of such relationships that are found in the boreal forests. You may conduct an in-depth study, and find out more about symbiosis in taiga.