A Guide to Understand Projectile Motion With Real-life Examples 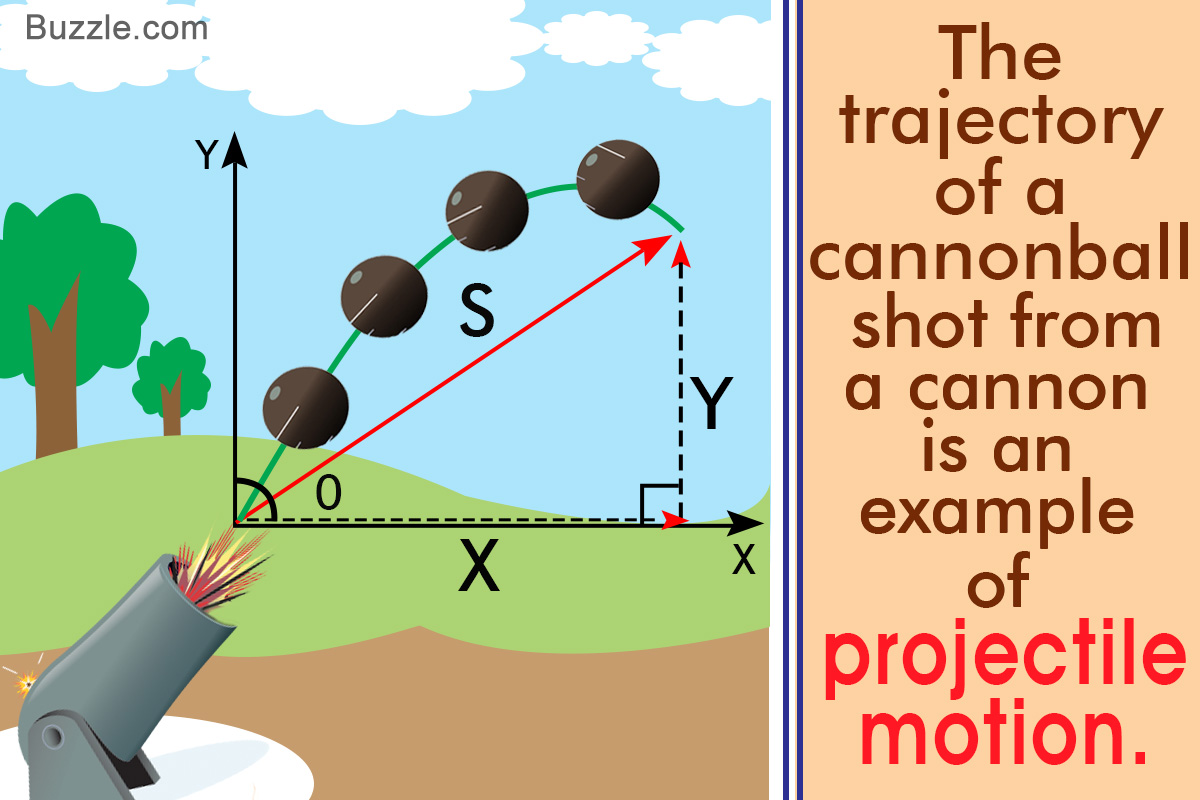 A bullet fired horizontally from a gun inside a vacuum with no obstacles in its path, will follow the rules of projectile motion. Amazingly, if at the instant that the trigger is pressed, another similar bullet is dropped down vertically from the same height, both the bullets will hit the ground at the same time.

When the apple famously fell on the great Issac Newton’s head, there were two things which he did not do. He didn’t shout curses at the tree for the lump on his head, nor did he decide to take revenge on the apple by devouring all its ripe and plump juiciness. Instead, what he did was formulate a set of laws which later became the very foundation of classical mechanics.

Kinematics, which is the branch of classical mechanics concerned with studying the motion of objects, is almost entirely based on these Newtonian laws. An interesting application of kinematics is in the study of projectile motion. It allows us to describe a variety of different motions, right from those of baseballs and cannonballs, to even the motion of aircraft. Sounds interesting? Then let’s go ahead and learn more about it.

What is Projectile Motion in Physics?

When you throw a ball in the air, right from the moment it leaves your hand till the moment that it falls to the ground or gets caught, its motion is known as projectile motion. If you sketch the trajectory of the ball’s flight with dotted lines on a piece of paper, you will get a curved shape. This is the characteristic path followed by objects in projectile motion. So why does the ball follow this curvilinear path? Newton was able to explain this in terms of gravity.

He argued that the reason why different objects (including the apple) fall down towards the Earth rather than fly off into space is because the Earth imparts a kind of attractive force that pulls them towards it. Newton named this force gravity. He also developed a law, known as Newton’s second law of motion, which helps us arrive at the equation for calculating the value of the gravitational force acting on different objects.

Mathematically, if ‘m’ is the mass of an object, and ‘a’ is its acceleration due to the force ‘f’ acting upon it, then according to this law,

Newton was able to calculate the acceleration of a body in the downward direction as a result of the Earth’s gravitational force to be approximately -9.8 m/s2. This value remains constant for all objects on the surface of the Earth. It is represented as ‘g’. Hence, the gravitational force (fg) acting on an object having mass ‘m’, is given by,

Note: Since mass is a scalar quantity, it has no direction. However, ‘g’ is negative, and hence, force, which is the product of these two quantities, is negative in the case of projectile motion. This negative sign indicates that the force is acting in the downward direction.

Coming back to our example, when the ball is thrown up into the air, ignoring the effects of air resistance, the only force acting upon it is gravitational force. As we saw above, this force acts in the downward direction, and is thus responsible for retarding the ascension of the ball. So, with this in mind, let’s examine the trajectory of the ball in flight, represented by the diagram below.

Projectile Motion of a Ball

The only force acting on the ball is the force of gravity in the downward direction. Therefore, as there is no force to oppose it, Vx = V0 will remain constant throughout the flight. Vy, however, will suffer from retardation caused by the force of gravity. At the instant the ball leaves your hand, Vy has a certain value determined by the force with which the ball is thrown. As the ball continues to rise upward, every second its velocity gets retarded by 9.8 m/s2, until at one point it becomes zero, that is Vy = 0. This is when the ball reaches the middle point of the trajectory curve.

Since the upward velocity has now become zero, the ball stops rising. However, gravitational force still continues to act on the ball, and so now the ball starts to fall with a velocity that is accelerated every second by 9.8 m/s, until it falls to the ground or gets caught. Thus, we are able to see why a ball in projectile motion follows a curved path.

The following are the formulae used for calculating the different parameters related to the trajectory of the projectile motion.

The following are a few common examples of projectile motion in real life.

1) A football kicked in a game.

2) A cannonball fired from a cannon.

4) A disc thrown in the sport of discus throw.

6) A jet of water escaping a hose.

Now that you are clear with the concept of projectile motion, and have gone through the few real-world examples given above, let’s see how to use this knowledge for solving numerical examples in physics. These examples demonstrate how the concept of projectile motion can be applied to the different applications in real life. Note that the effect of air resistance has been neglected in these examples.

Allen stands on a 22 m high cliff, and throws a stone in the positive X direction (forward). The stone lands at a distance of 35 m from the edge of the cliff. Calculate the horizontal velocity with which the stone is thrown.

The stone will undergo projectile motion till it hits the ground. However, it is important to note that it hasn’t been thrown in the vertical direction, and therefore, has zero vertical velocity to begin with. Keeping this in mind, let’s list out the horizontal and vertical components of the stone’s flight.

Taking the square-root on both sides,

A ball is thrown with a velocity of 20m/s at an angle of 50º to the normal. Find the following parameters,

Thus, in real life, projectile motion is a phenomenon that we observe frequently. Armed with the knowledge of kinematics, you are now in a position to analyze it, and therefore have a better understanding of how things around us behave.