How was the Mid-Atlantic Ridge Formed?

The Mid-Atlantic Ridge (MAR) is an underwater ocean ridge, that is a part of the largest mountain range in the world. In this article, we shall look at some interesting Mid-Atlantic ridge facts such as the process of its formation, its location, length, volcanoes, etc.

Home / Uncategorized / How was the Mid-Atlantic Ridge Formed? 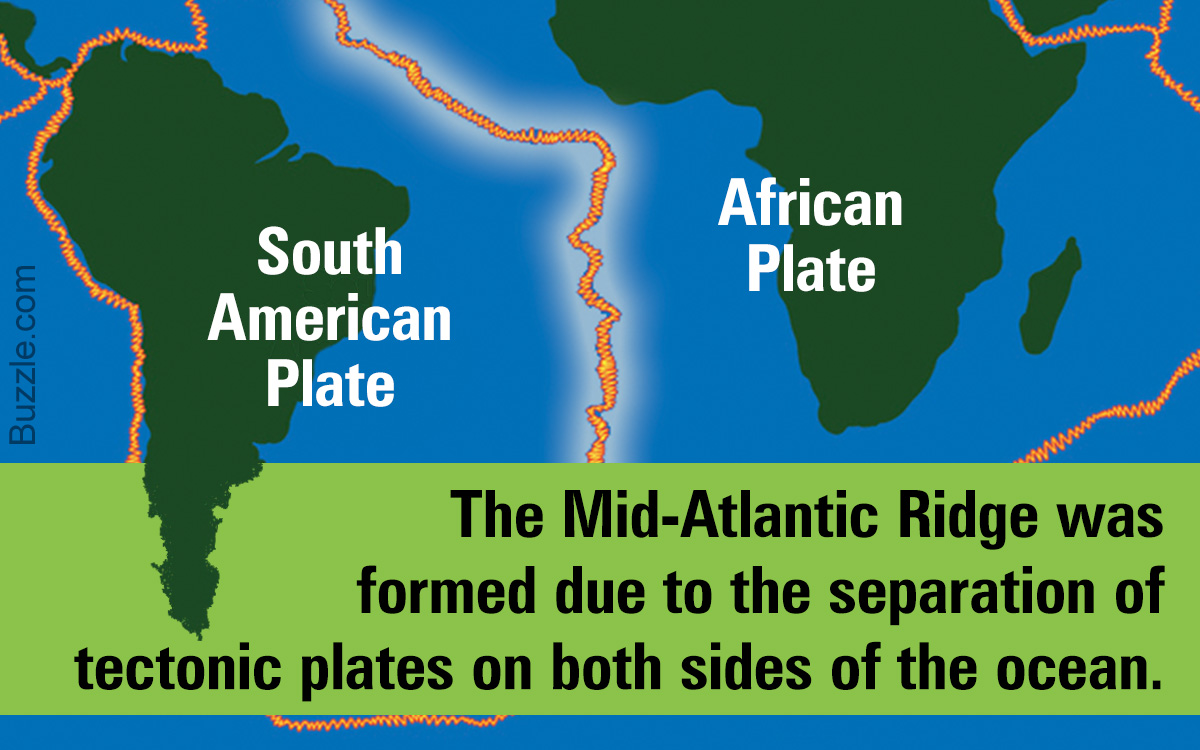 The Mid-Atlantic Ridge (MAR) is an underwater ocean ridge, that is a part of the largest mountain range in the world. In this article, we shall look at some interesting Mid-Atlantic ridge facts such as the process of its formation, its location, length, volcanoes, etc.

The deep-sea marine animals residing in the Mid-Atlantic Ridge region, are not dependent on sunlight/photosynthesis for their survival. Instead, they get their energy from microbes, that oxidize chemical compounds being spewed from hydrothermal volcanic vents through chemosynthesis.

What is the Mid-Atlantic Ridge?

Located around the north to south axis of the Atlantic ocean, the MAR separates the north and south American tectonic divergent plates on its west and the African and Eurasian plates to its east. The Mid-Atlantic Ridge is an extremely long underwater mountain range that runs from the Arctic ocean to the southern tip of Africa, with a length of around 10,000 miles. The ridge is roughly located at the same distance from all the continents at its sides, with some of its mountains reaching a width of around 1000 miles. The peaks of these mountains sometimes protrude from the water to form islands such as St. Helena, Azores, and Tristan da Cunha among others. Let us now study the history behind the formation of this wonderful creation of nature.

How was the Mid-Atlantic Ridge Formed?

Formation of the Mid-Atlantic Ridge

Most geologists consider the ridge to be a slow-spreading ridge that is widening in area by around 0.5 inches every year. Initially, the Atlantic ocean was a small inlet of water, which has widened to its massive present size due to this slow spread of the mid-ocean ridge. It is located on the Mid-Atlantic rise, that is a bulge across the floor of the ocean caused by the heat that is moving upward through the mantle in the region.

The ridge is thought to have been formed in the Triassic period, due to the divergent motion of Eurasian, North American, South American and African tectonic plates, which caused the formation of a three-armed valley in Pangea, the ancient supercontinent. This movement of the earth’s crust is believed to be a major factor in the continental drift phenomenon.

The formation of the Mid-Atlantic Ridge took place in the following way.

Volcanic Activity in the Mid-Atlantic Ridge

Most active volcano systems exist underwater in ocean ridges across the world, and account to around ¾ of all the magma that is pushed out to the surface of the earth. These volcanic activities result in very rare and unique marine life and ecosystems.

Being the longest such ridge in the world, the Mid-Atlantic ridge has many areas of perpetual magma outflows. Slow-spreading ridges such as this, have a deep rift valley that can be as wide as 6 miles and as deep as 2 miles, from the ocean floor. However, the volcanic areas on the ridge are small and spaced out. On an average, around 450 volcanic seamounts can be found in a 500-mile stretch of the ridge. The size of these volcanic mounds also varies a lot and can range from 150 – 2,000 feet in height, and can either be sharp or have a flattish top.

Due to the slow flow of magma, eruptions are very rare, unlike the East-Pacific ridge. Iceland is a major part of the Mid-Atlantic ridge, and due to this it is home to many active volcanoes, which are known to cause problems in air travel all across northern Europe. One can usually find an above-water eruption once every five years, and even more in the submarine areas around the country. Recently, in August 2014, a series of eruptions started in the Bardarbunga volcanic system, which is releasing huge amounts of SO2 in the Icelandic atmosphere, and creating smooth and rough flowing lava structures. However, Iceland also enjoys many major advantages of this high rate of volcanic activity. The volcanic heat of the island means that most houses use natural geothermal heating. Also, the numerous hot springs in the country power hydroelectric power stations. These natural sources of energy enable Iceland to keep its pollution to extremely low levels.

Besides being the source of several interesting ecosystems, the Mid-Atlantic ridge gives scientists an opportunity to study volcanic and tectonic activities, which can help prevent and warn humans about future natural calamities to a large extent.