An Overview of the Flora and Fauna During the Ordovician Period

Adaptation of different species, mass extinctions, diversification of marine life; all these are characteristics of the Ordovician Period, which belongs to the Paleozoic Era. Read this article to gain more information about this period, along with its major plants and animals, fossils, climate, environment of deposition, etc.

A World of Calcite

The geochemistry of marine environment during Ordovician consisted mainly of calcium products, which were in the form of calcium carbonate, calcium silicate, calcite, etc. Most of the invertebrates had a calcitic skeleton, and even the sedimentary rocks of that time consisted of calcitic cement.

The term ‘Ordovician’ was first coined by Charles Lapworth in 1879, with reference to the Celtic Tribe called the ‘Ordovices’, who lived in the area where rocks belonging to this period were found. There was a controversy in the beginning, as the rocks were first categorized under either the Cambrian or Silurian Period. Later, on the basis of unique fossils embedded in the strata, a new time span was formed.

The most distinguishing characteristic that makes it unique from the other periods of the era is the kind of adaptive radiation shown by organisms; the Cambrian explosion was essentially continuing along the Paleozoic. The following section will describe in brief, few of the major plants and animals found during this period.

List of Animals and Plants From the Ordovician Period 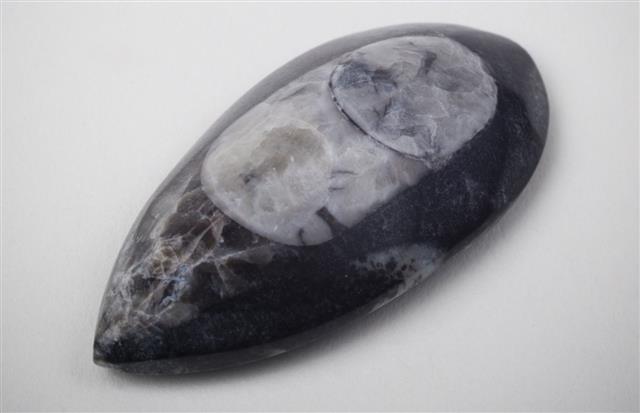 The Ordovician is known for sudden diversity in life regarding invertebrates and even early vertebrates like fish without jaws in its early stages. We can say that the Ordovician fauna set off a chain of adaptive radiation that remained more or less constant throughout the Paleozoic Era (with the exception of mass extinctions). Read the following list to know more about the fauna of this time span. The following slideshow will help you to visually understand the faunal variation.

Another popular class of mollusks, these organisms first occurred in the Cambrian, and experienced a lot of evolution till date. The Heterodonta variety is found extensively in rocks that date back to more than 400 Ma. This subclass mainly includes mollusks that have equal-sized valves and different types of teeth arranged in a single organism.

These organisms had a bivalve mollusks, and also were sessile or free-floating. Several fossils have been found that date back to more than 400 Ma. The genus Lingula of Brachiopods is often called a living fossil, as a similar genus existed during the Ordovician Period.

This phylum includes organisms that are filter feeders, and many fossils have been found of extinct species that date back to the early Paleozoic era. Rather, they are known to occur first only in rocks that were deposited in the early Ordovician, and later on in the subsequent periods.

These chordates were narrow and slender, often appearing in eel-like forms. They are known to be the first faunal organisms that developed primitive teeth. They adapted quite well to the Ordovician environment.

These anthozoan invertebrates first appeared on our planet in the Cambrian Period, and underwent diversification till the Ordovician. Tabulate and Rugose varieties were dominant in this period, as inferred from their fossils embedded in limestone and shale rocks. These organisms thrive in colonies, and majorly form large reefs in shallow seas.

Articulate Crinoids evolved considerably in this period, and the earliest known crinoidal species also dates back to the same time-span. They are classified under phylum Echinodermata and appeared in the form of lily-like forms. Initially they were free-floating in nature, but gradually they adapted to a sessile habit.

These are an extinct group of organisms that belonged to the phylum Echinodermata, and they flourished considerably in early Paleozoic time. Echinosphaerites aurantium is a popular example that dates back to middle Ordovician time. Cystoids basically had oval-shaped bodies with a rigid-exoskeleton and pores on the surface.

These extinct arthropods flourished from mid-Ordovician to Permian time spans and are also called ‘sea scorpions’. Most of them had segmented body structure with four pairs of thin legs and compound eyes. Organisms belonging to the Eurypterus genus had the largest diversity in the marine environment around 400 million years ago.

These mollusks are in the form of a single valve, and first appeared during the Cambrian Explosion about 540 million years ago. Large ones thrived during the Ordovician Period, and several fossil evidences are present in rocks that date back to this time-span.

One of the most diverse groups of mollusk Cephalopods to exist in the Paleozoic Era, fossils of more than 2,000 extinct species have been found till now. Popular examples of such organisms that existed around 400 – 500 million years ago are the Discitoceras, Rayonnoceras, Endoceras, Cameroceras, etc.

They were dominantly present throughout the entire Ordovician and are often used as index fossils for the middle Paleozoic Period. Graptolites belonged to the phylum Hemichordata, and appeared in various forms like dendritic, branched, colonial, or even V-shaped.

No other invertebrate arthropod dominated the Paleozoic Era as much as the trilobites. The Ordovician Period is considered to be the last time-span when these organisms diversified extensively. Several changes occurred in their environment, most important being habitat changes.

The Ordovician Period is most famous for the evolution of first vertebrates on our planets in the form of jawed-fish. They are now included under the phylum Gnathostomata. Their dominance was significant for further adaptive radiation, which reached its peak in the Devonian Period.

Plants first appeared in the Ordovician Period in the marine environment, and had small, non-vascular forms. In the late stages of this period, the first land plants began to develop, albeit very steadily with slow changes in morphology and evolution. The following list of Ordovician plants will help you to understand the floral environment that existed more than 400 million ago. Also, go through the representative photographs in the slideshow below.

They are regarded as one of the first indicators of plant life that developed on land, and several micro-fossils have been found till now in rocks that date back to the Ordovician time span. These fragments basically are tiny sheets-like material that forms a part of the leaf covering in plants called cuticle.

These are primitive plant spores, which existed in the early Paleozoic Period, and showed significant evolution especially during the Ordovician Period. Along with cuticle fragments, they are the best indicators of plant life development on continental masses, and the subsequent diversification.

Though originating in the Late Cambrian, these algal varieties adapted quickly to the Ordovician environment. They had non-vascular structures and appeared more or less like liverworts. It is said that the first proper vascular land plants have a common ancestor in the form these green algae.

Marchantiophytes or Liverworts belong to the group of bryophyte land plants and first appeared on out planet during the mid-Ordovician times. They resemble a moss-like structure with a thallus and rhizoids. Recently, five different types of liverworts were found in Argentina in the form of fossils, which date back about 470 Ma.

Another group of bryophytes, they appear as clumps of green masses, which have leaves with a thickness of just one to few cells. The leaves are attached to thin stems. They evolved so extensively during the Ordovician that according to latest research, it is suggested that their CO2 absorbing ability might have contributed to the occurrence of Ordovician Ice Ages.

They can be said to be an evolved version of the cryptospores, wherein each had three axis lines radiating from the center to the periphery. They are considered to be a significant form of evidence of land plants in the Ordovician Period. Rather, there exist a time span, wherein no macro-fossils have been found till now with the exception of these spores in this period.

Other Important Characteristics of the Ordovician Period 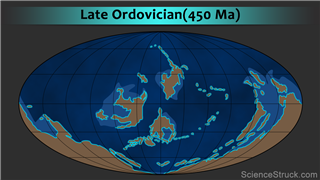 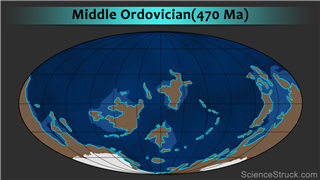 Most of the northern hemisphere consisted of the Panthalassic Ocean, along with the Iapetus Ocean, Rheic Ocean, Tethys Sea, etc. The majority of landmasses were present in the southern hemisphere, including parts of North America, Africa, and Europe. Evidence of ice caps covering these regions including the present Sahara Desert area can be studied from the available marine fossils. The image given below shall provide you with a brief idea about the movement of contienetal plates on our planet during the Ordovician Period.

The supercontinent of Gondwana existed during this time span, which was located near the south polar regions. The continents of Baltica and Laurentia were still separately situated, and the former started to drift towards the latter during middle Ordovician. Avalonia also got separated from Gondwana, and moved in the northern direction towards Baltica, leading to the formation of Rheic Ocean between both the landmasses. The Taconian orogeny that had started in the Cambrian Period continued in the Ordovician.

This period was characterized by the sea levels being at the highest level as compared to the other time-spans of the Paleozoic Era. In the middle stages of this period, the levels dropped considerably, but rose again in Late Ordovician. The Hirnation Glaciation occurred at the end of this time span when sea levels dropped significantly leading to a marine regression and cold climatic conditions. Atmospheric temperature were high during the beginning of Ordovician, and this benefited the thriving and adaptability of flora and fauna.

The levels of carbon dioxide were higher in the atmosphere as compared to the current levels by at least 15 times. A major reason for this was the extensive volcanism present during the entire Ordovician Period, which contributed a large amount of carbon dioxide to the atmosphere for several million years. Also, as rapid marine transgressions and regressions took place due to high sea levels, most of the continents underwent flooding. As the land portions had less vegetation, weathering rate of silicate rocks was also less, leading to the persistence of CO2 in the atmosphere.

The variety of adaptations of plants and animals of the Ordovician Period cannot be seen in any other timescale. This period ended with the Ordovician-Silurian mass extinction, which occurred around 445 million years ago in the form of two pulses or phases. It is also termed as the second-largest mass extinction event after the Permian-Triassic mass extinction.

The two phases of this event are said to have occurred with a gap of around a million years in between them. About 60% of marine life consisting of marine invertebrates and 50% of marine plants died shortly. The main reason for this event is said to be the shifting of Gondwana towards the South Pole, inducing glaciation and formation of cold climatic conditions that were not suitable for thriving of organisms.