Spanning around 200 million years, the Mesozoic Era was characterized by rapid evolution of life on the Earth, most noteworthy being the rise and fall of the dinosaurs. In the plant kingdom, the flowering plants appeared for the first time. Read this ScienceStruck article to know more about various characteristics of this era, like the plants, animals, climatic conditions, and major events.

The Longevity of Life

Dinosaurs, being the most dominant reptilian species, ruled our planet for more than 135 million years, being at their peak during the late Jurassic to the early Cretaceous (middle and upper periods of this time span). This can be said to be one of the most successful domination streak of any large animal species on our planet till now.

The term Mesozoic has been derived from the Greek words mesomeaning ‘between’, and zōon, which means ‘living being’. Alternatively, this era is called ‘middle life’, as it is sandwiched between the ‘ancient life’ and ‘modern life’ time spans, i.e., Paleozoic and Cenozoic, respectively. Thus, the Mesozoic Era is the second one in the Phanerozoic Period, and marks extensive and rapid evolution and development of life, both on land as well as in the oceans. According to research, the planet’s atmospheric temperature was much higher than that of today.

This era is divided into three periods: Triassic, Jurassic, and Cretaceous, which are again subdivided into a number of series/epochs (lower, middle, and upper) and various stages. As this time span started after the Permian-Triassic extinction event (the largest mass extinction ever), it took at least 30 million years on our planet for new life to emerge. Along with evolution, rapid climatic and tectonic changes also took place, in combination with the separation of a supercontinent called Pangaea, into present-day individual continental portions.

Interesting Facts and Major Events of the Mesozoic Era

Unlike the previous era periods, the Mesozoic consisted of only three main time spans, which were considerably longer from the beginning to their end, the Cretaceous being the largest one. Refer to the following image to understand the timeline of this Era, depending on the variation of characteristics across the periods. 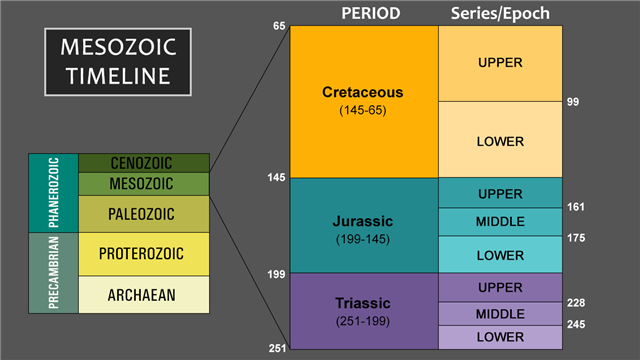 As this Era was bounded by two of the largest and most significant mass extinctions, the 200 million years of main Mesozoic time span was characterized by a lot of dynamic activities in relation to geological and tectonic upheavals. The Permian-Triassic mass extinction event changed the entire scenario of life on Earth. Though the exact causes have not been determined yet, it is said that an asteroid or large meteorite impact along with decreasing oxygen levels probably led to this event, where almost all the entire marine species were killed off. 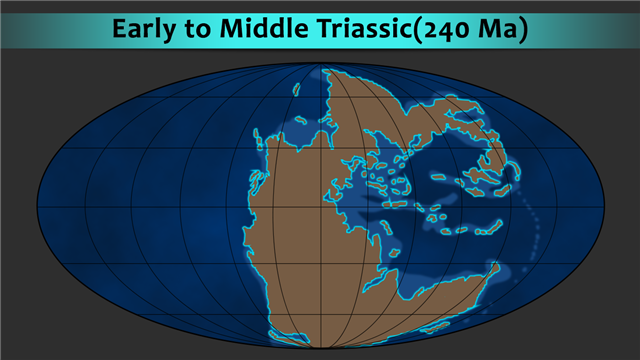 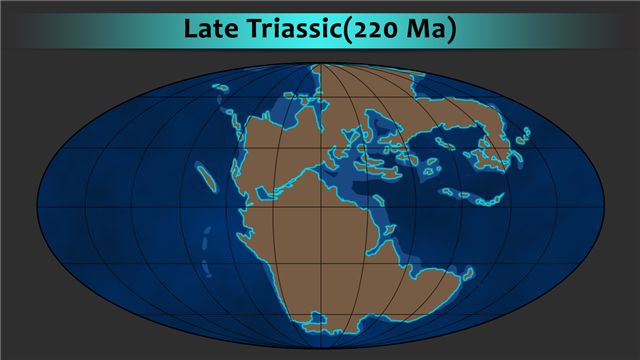 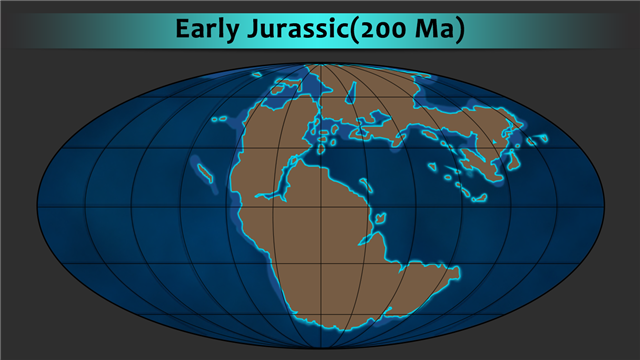 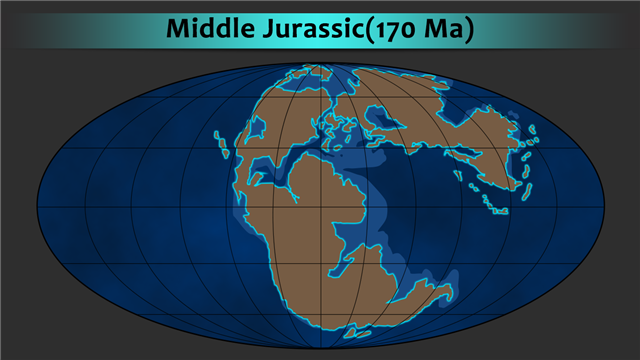 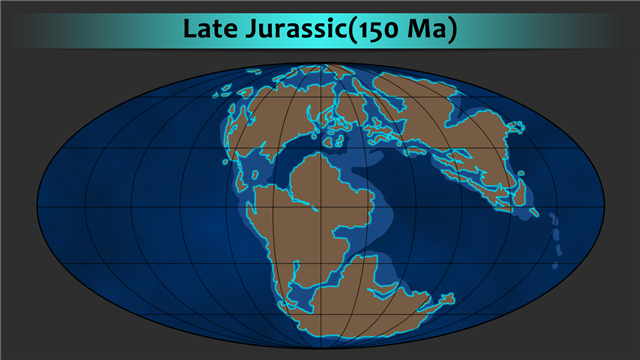 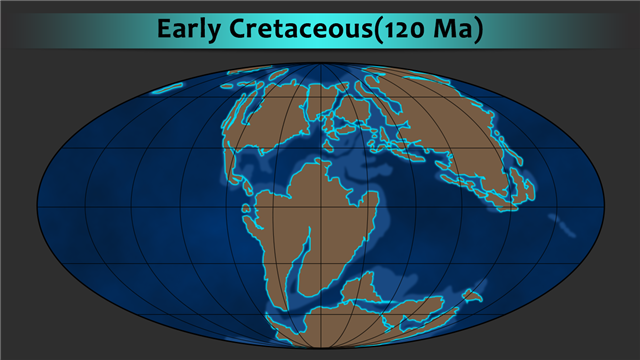 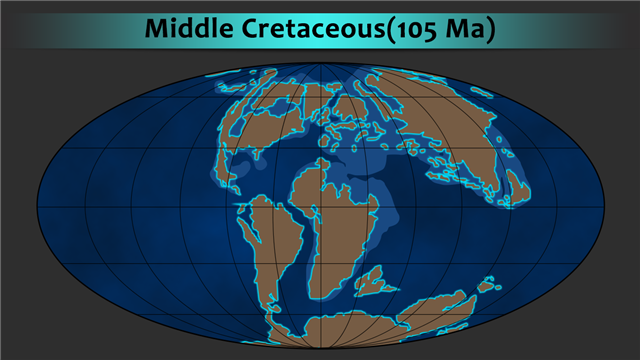 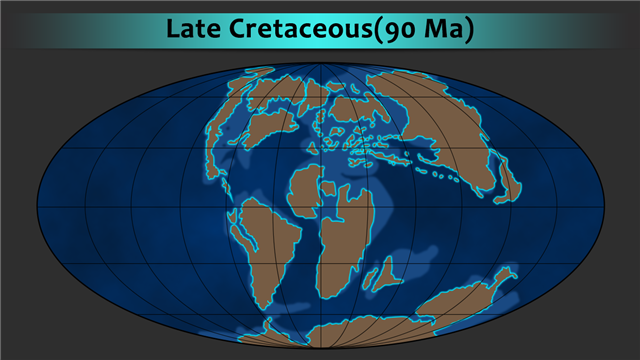 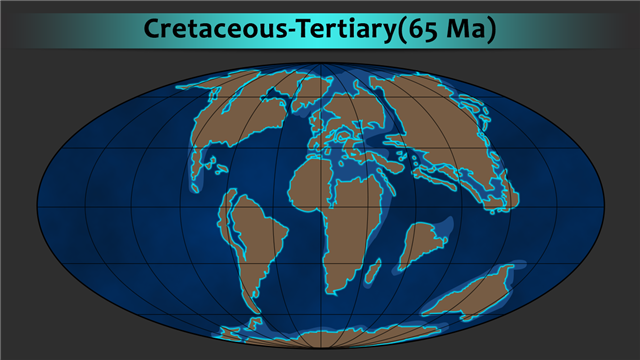 Regarding the geological and tectonic activity, mountain building processes were comparatively less as compared to that of the Paleozoic Era. The major orogenies of Mesozoic are Innuitian orogeny, Cherskiy mountain range, Verkhoyansk mountain range, etc. Subduction processes of oceanic plates under continental plates showed a dramatic increase. Contrary to the formation of a supercontinent in the previous era, the same landmass started disintegrating in the Mesozoic time period. Thus, Pangaea underwent separation into two large continents: Laurasia in the north and Gondwanaland in the south. The Atlantic and Pacific outlets slowly opened up, and coupled up with alternating sea level rise and fall, the initial freshwater bodies began to form, which would latter prove to be a deciding factor for the existence of life.

The latter half of Mesozoic consisted of many dynamic tectonic activities. The chief ones being formation of Europe, Northern Asiatic regions, and North American continent from Laurasia in the Northern Hemisphere. Likewise, Africa, South America, the Indian subcontinent, Australia, and Antarctica were the separated portions of Gondwanaland, which were mainly concentrated in the Southern Hemisphere.

Even though the average temperature was higher than that of today, the climatic factors had an alternating characteristic between warm and cold, probably indicating the intermittent occurrence of global warming and Ice Age phenomena. At the start of Mesozoic, mainly dry and climate and high temperatures were present, more or less similar to those in Carboniferous.

According to several studies on sedimentary deposits, Pangaea was undergoing a marine regression at that time, leading to the deposition of evaporites (like gypsum and halite), mainly in the interior land portions. The climate was likely to be so hot intermittently that vast deserts might have covered extensive areas, but research also suggests that few intermittent periods of high rainfall did occur, indicating sudden climate change. This was a likely cause of a large mass extinction event termed as the Triassic-Jurassic extinction, which wiped out almost 70% of all floral and faunal species. Temperatures decreased a bit during this time, but increased again as Pangaea began to split apart, followed by inflow of water and a marine transgression. Thus, the desertification lessened after several million years and humidity increased in the Jurassic period.

Followed by a brief fall in the sea levels in the Cretaceous time span, the levels drastically increased, and probably were the highest in the Phanerozoic Eon, up till now. Information about the climatic conditions are somewhat controversial due to less evidence, and various theories have been proposed for the same. In general, the carbon dioxide content increased in the atmosphere; this has been attributed to severe volcanic activity, followed by unpredictable temperature fluctuations. At the end of the era, climate change might have played a major role in the Cretaceous-Paleogene (K-Tr) mass extinction. 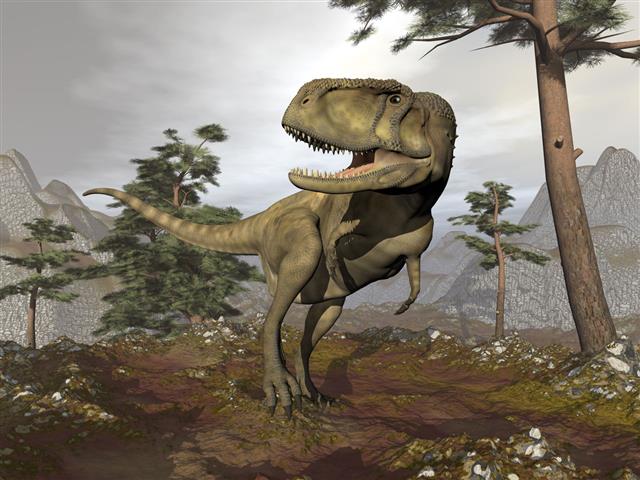 In case of plants, gymnosperms continued to thrive and evolve in this era. Ginkgo and Sequoia are two genera, which first appeared in the Mesozoic and were quite successful. One of the most notable evolutionary aspect was the emergence of angiosperms or flowering plants. But, they still did not thrive a lot in the Mesozoic conditions, and only developed in the Cenozoic Era. Apart from these floral examples, ferns, cycads, glossopterids, and horsetails were some of the important plants,which survived the previous extinction event.

The dry climate proved to be beneficial for the growth of such plants, and soon large dense forests formed in many areas. The thick tree trunks then got buried under sedimentary layers, and underwent petrification (a type of fossilizing mechanism, wherein the organic matter replaced by inorganic material, maintaining the same shape and form). Cycads flourished in the Jurassic, and hence this period is also called ‘The Age of Cycads’. They reached differing heights; few species being short and stout, and the others grew about 80 feet tall or more.

Some of the well-known Mesozoic floral varieties are Osmunda (a fern with short stem and thriving in warm conditions), Williamsonia (a small shrub with a fern-like appearance), Araucaria (a tree having pointed leaves and grew mostly on high altitudes), Pityostrobus (a tree which had cones containing seeds like that of the modern pines), etc. Archaefructus liaoningensis is probably one of the oldest angiosperm fossil that dates back to 120 million years in the Cretaceous period. This indicates that though angiosperms did not dominate, they did play a significant evolutionary role in the biodiversity of that time

Ironically speaking, the Permian-Triassic extinction was one of the main reasons for emergence and fast development of fauna in the Mesozoic Era. Firstly, amphibians came out of water and started expanding on shore areas, followed by reptiles. Thus, we can say that this time span, belonged o the vertebrates, who gained from the eradication of earlier animals like Dycinodonts, Cynodonts, and Gorgonopsia, which lived in the Paleozoic.

In the late Triassic period, terrestrial dinosaurs evolved rapidly and comprised both herbivorous and carnivorous species. Also, avian varieties like Pterodactylus, Pteranodons, Aetodactylus, etc., dominated the aerial habitat. They also were the first flying reptiles on our planet. In the Jurassic period, primitive varieties of birds appeared, which are said to be descendants of theropod dinosaurs. Apart from this, the actual extensive diversification of dinosaurs started in this period, and continued till the Cretaceous, which is considered to be the peak time of their evolution. Some of the major dinosaurs that rules the continents were apatosaurus, tyrannosaurus, brontosaurus, velociraptor, stegosaurus, spinosaurus, triceratops, etc. Both herbivorous as well as carnivorous categories were present according to the eating habit.

Towards the Cretaceous period, small mammals emerged for the first time in Earth’s history, but were not much significant in the Cretaceous biodiversity as ruling of reptiles still continued. Ichthyosaurs and Plesiosaurs are two main example from this time span. Though diversity was maximum regarding dinosaurs, various insects, other small reptiles, small mammals, etc also evolved gradually. One of the most significant and noteworthy evolution of the Cenozoic is that of the Archeopteryx bird genus, which is considered to be one of the first birds on our planet.

Also called Cretaceous-Paleogene Mass Extinction, it was the most recent large extinction event in the history of our planet. It occurred roughly around 66 to 65 million years ago, wiping out all the non-avian dinosaurs, along with scores of other plant and animal species. Unlike the previous Permian-Triassic Mass Extinction Event, the K-Tr extinction occurred suddenly and had effects on the entire planet.

Strong evidence suggests the impact of an asteroid that probably made the Chicxulub Crater in Yucatán Peninsula, Mexico, and caused the entire food chain to collapse. The impact would have had caused a large shock wave, which must have killed everything in its path. The generation of giant tsunamis and huge clouds of dust in the atmosphere must have been contributing factors in case of the asteroid collision. Other causes include the drastic drop in sea levels during the Maastrichtian stage of the Cretaceous Era, which must have killed numerous organisms in the marine regions, further affecting the food chain on land.

Another cause, which is said to be a logical one is the eruption of Deccan Traps (the largest flood basalt traps in the Indian Subcontinent), around 65 million years ago. The date coincides with that of the asteroid impact, and hence, both these causes are often said to have occurred in combination, which was enough to wipe out more than half the life on Earth. According to research, at least 75% of all organisms (both flora and fauna) died in this event, which accounts for about two-thirds of all the organism that existed on our planet at that time. Thus, the Age of Reptiles was over, and the Age of the Mammals began.

Mammals got a chance to evolve with the extinction of the dinosaurs, along with modern-day insects like butterflies, ants, grasshoppers, etc. Life did not adapt quickly after the Mesozoic Era ended; the process was quite slow, as several small extinction events also occurred in the Cenozoic Era. Nevertheless, the Mesozoic Era will always be remembered informally as the Age of the Dinosaurs.