The amount of water on the planet is basically stable, but it is in continuous cyclic movement and hence, is referred to as the water cycle.

Water evaporates from various water bodies by becoming water vapor. This water vapor continues to soar in the sky, until it reaches the point wherein it condenses and forms clouds. The clouds then precipitate to send the water back to the surface of the planet and the same process is initiated all over again.

This may seem a bit confusing, but a look at the diagram provided below, which highlights each step of the water cycle, will make things pretty clear.

Evaporation is the process wherein any liquid (water) turns to a gaseous state (water vapor) due to an underlying factor acting upon it, and gradually disappears in the atmosphere. This is one of the most important steps of the water cycle. In this case, the underlying factor is the Sun, which heats the water in various water bodies on the planet, like oceans, rivers, lakes, or wells. Even a bucket of water kept outdoors is subjected to evaporation. As the water turns to water vapor, its starts ascending in the atmosphere.

Condensation is the process wherein any matter in the gaseous state (water vapor) turns to a liquid state (droplets of water), as the molecules in it lose heat energy necessary to move around. In case of water cycle, evaporation takes water vapor to a certain height, wherein the molecules in it lose the energy to move around and condense to form a cloud with the help of dust or smoke particles suspending in the atmosphere.

As you can see in the diagram above, the next step of the process is precipitation, wherein the condensed water vapor comes down to the surface of the Earth in various forms. Precipitation occurs when the accumulation of water in the cloud exceeds its actual capacity and the clouds can no longer hold the water. Though there are quite a few forms of precipitation, rainfall and snowfall are the most common forms, and both have a few sub-types of their own.

In this step of water cycle, all the water which comes down in the form of precipitation is collected into different water bodies, from which it eventually evaporates. If the precipitation occurs over any water body, such as the oceans, rivers, or lakes, the water is directly accumulated into it. However, if precipitation occurs over land, the water either runs over the surface, or percolates into the ground. Water flow on the surface is referred to as surface run-off, while the flow beneath the ground is referred to as ground water flow. In either case, the water makes its way to some water body, from where it is eventually evaporated, and the whole cycle begins all over again.

This process, involving the movement of water by evaporation, condensation, precipitation, and collection, has been occurring since millions of years and plays a crucial role in making Earth the only planet with life. Among the several benefits of water cycle, the most important one is natural water filtration, wherein the contaminated water on the planet is converted to fresh water as all the contaminants in it are left behind during the process of evaporation. 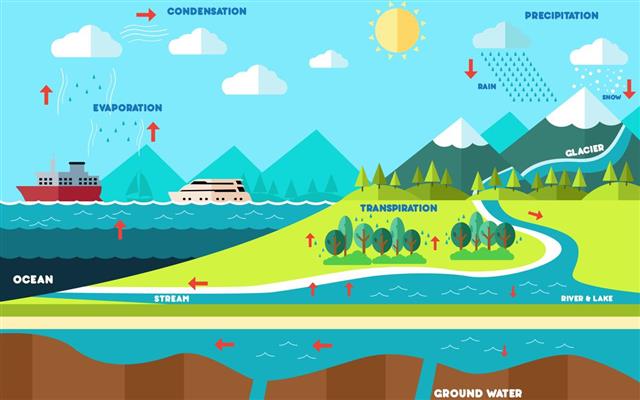