Uses and Side Effects of EDTA 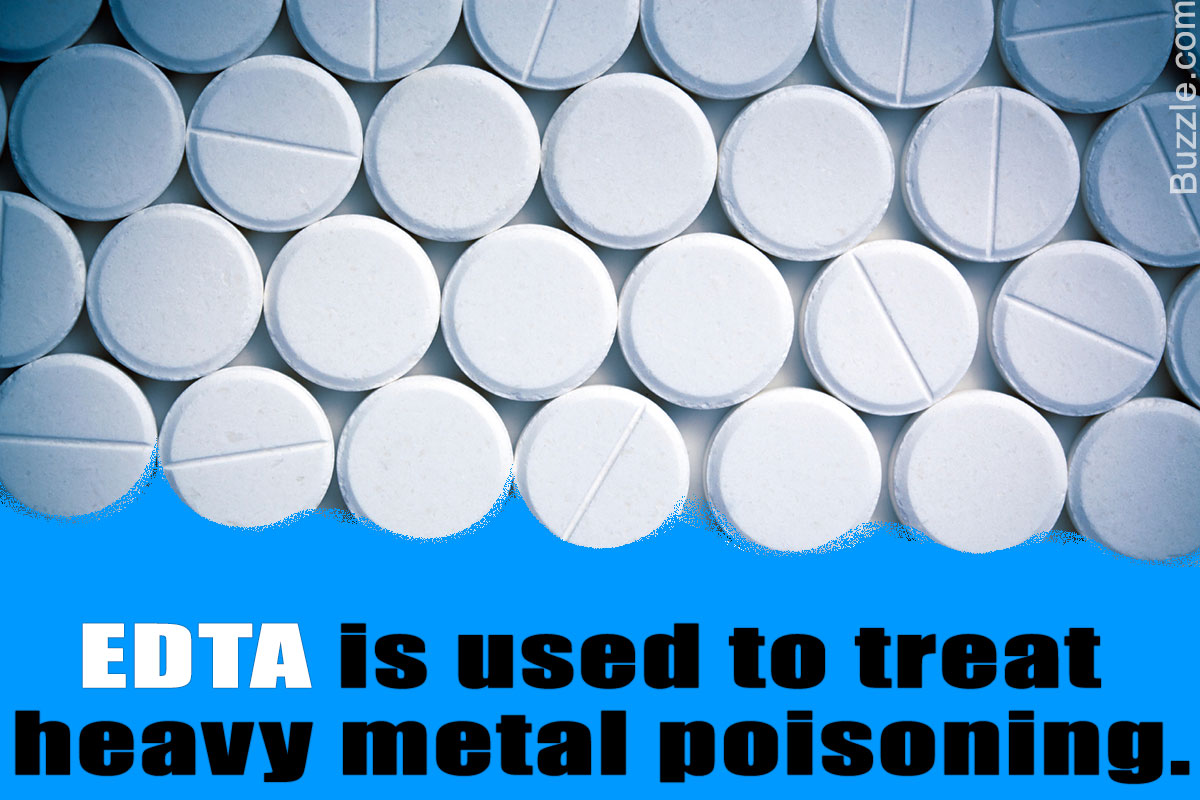 There are a few compounds that have the ability to bind to a metal ion of a substance more than once and are described as polydentate (many-toothed). EDTA is one such compound and because of this it has many uses in food, industries and others. It has a few side effects as well.

The Food and Drug Administration has approved Calcium Disodium EDTA, as a pharmaceutical agent for the treatment of heavy metal poisoning and related brain damage.

EDTA is also called ethylenediaminetetraacetic acid and edetic acid. It is a colorless solid that’s soluble in water. On account of its hexadentate (six-toothed) structure and chelating property (its ability to sequester metal ions), it finds varied applications in everyday life. A chelating agent is a claw-like substance that attaches itself to other metal ions. It is widely used in industries, medicines, food industry, oil industry, and others.

At the end of the second world war, EDTA was used to treat people who worked in battery factories and had painted US Navy vessels with paints containing lead. They were badly affected with lead poisoning due to high exposure to lead. EDTA was given to these people and it worked really well in removing lead from their bodies. Since then, it is one of the most important treatments for severe lead poisoning.

EDTA is used as a stabilizer for foods that are packaged. When it is added to food, the color and flavor of the food are preserved. EDTA eliminates metal cofactors needed by enzymes that may cause the food to spoil.

EDTA is used in processed fruits and vegetables like dried bananas, canned mushrooms, canned beans and frozen potatoes. EDTA links with traces of metal in food left during the processing stage or while storing. It prevents the metal from reacting with food, and hence avoids spoiling of the color and content of packaged foods.

EDTA suppresses the oxidation and decaying process. Its acts as an antioxidant by preventing packaged meat from getting spoiled.

EDTA is used as an addition to mayonnaise, ketchup, jam and salad dressings to maintain their color and flavor. It is also used to maintain the color in some soft drinks.

EDTA is used in canned fish and shellfish where it keeps them from turning stale and smelly.

EDTA helps to maintain the texture and flavor of condensed milk and skim milk.

EDTA is added to beers where it acts as an anti-gushing agent. Other beverages like whiskey, vodka, and rum also contain EDTA.

As a medicine, EDTA is given by injection intravenously or intramuscularly. It is also taken as oral medicine, but it works faster when it is introduced to the body directly through veins.

EDTA is used for the treatment of patients with heavy metal poisoning like lead and cadmium. This treatment is called chelation therapy, where EDTA renders the toxic ions present in the body harmless. EDTA is very effective at removing toxic substances from the blood.

Once it enters the bloodstream, due to its hexadentate structure, EDTA draws toxic heavy metal ions in the bloodstream towards itself and binds itself to these metal ions. This attachment leads to the formation of a compound which is expelled from the body through urine.

EDTA helps to reduce excess calcium levels in the blood, a condition called hypercalcemia. However, doctors adopt other methods of treatments that are less likely to cause kidney side effects.

EDTA is used intravenously to treat irregular heartbeat and palpitations, chest pain, high blood pressure, and blood circulation problems. EDTA is used to treat heartbeat problems caused by drugs like digoxin. However, healthcare providers adopt other treatments like lidocaine or phenytoin as they are considered safer and more effective.

EDTA is used in eye drops to remove calcium deposits in the eye to improve vision.

EDTA is sometimes used in ointments for skin irritation caused by certain metals.

Some claim that EDTA may act as an anticoagulant. It may help to remove calcium ions that are responsible for blood clotting. However, there is no research conducted on this aspect.

Some also claim that EDTA works effectively against arthritis, Parkinson’s disease, Alzheimer’s disease, psoriasis, diabetes, peripheral vascular disease, autism, Raynaud’s syndrome, gangrene, heart disease and cancer. However, no evidence supports this claim, as they have not yet been proven by well-designed clinical trials.

In the paper industry, EDTA is used to maximize bleaching efficiency during pulping. It is used to whiten paper.

EDTA does not allow unwanted metals from reacting with products. This is called sequestering. Due to this, EDTA is used in cosmetics to increase its resistance against molecules in the air. It is also used in personal care and skin care products, where it links to free metal ions and acts as a purifying agent.

EDTA minimizes the hardness of water. Because of this, other ingredients in shampoos and soaps can work to cleanse more efficiently. EDTA is used as a stabilizer in detergents, soaps, shampoos, germicidal and anti-bacterial cleansing preparations, vehicle cleaners and many others.

In the textile industry, EDTA is used in dyed fabrics to maintain their color by removing harmful metal ions.

EDTA is used in oil industry for the drilling, production and retrieval of oil.

EDTA is used as a micronutrient fertilizer in agriculture and horticulture to provide plants with iron, manganese, zinc and copper.

EDTA is used as a bleach in photographic film processing.

EDTA is used to remove scales from boilers, heat exchangers, and other industrial equipment.

EDTA is used to reduce the hardness of water and prevent scale formation by calcium and magnesium ions.

To increase the life of battery, EDTA is used to dissolve and remove sulfate deposits from lead acid batteries.

EDTA should be used in small amounts in food or as a prescription medicine.

The less serious side effects include:

The serious side effects include:

EDTA is a very useful product and is therefore so overused that it is causing to be an environmental hazard. It is a relentless organic pollutant. EDTA is not able to decompose in the environment. It resists decomposition from biological and chemical processes. As a result, these organic pollutants are increasing and causing ecological concerns. The amount of EDTA is now being kept on surveillance with mass-spectrometry analysis methods.