If you work in a lab, then crucible tongs are a must to protect you from nasty chemical burns. This article highlights the uses of crucible tongs and their safety parameters.

If you work in a lab, then crucible tongs are a must to protect you from nasty chemical burns. This article highlights the uses of crucible tongs and their safety parameters.

According to Jewish tradition, tongs were first made by the Creator, since it didn’t exist before then.

The creation of fire had created a problem. Since food wasn’t eaten raw anymore, man needed to find a way to handle the meat. The first tongs were probably two sticks that held the meat together. But this was futile, considering the burned calluses you have to soothe later. Man invented weapons that could aid him in his day-to-day life. Survival was one thing, but he needed something that would get the food in his stomach. He could use the knife to cut the meat. But what about the soup? Wooden spoons couldn’t contain that temperature.

Tongs were invented just in time. You could use them for flipping meat over the barbecue, or to mix up a good salad. It’s used to remove dead wood or add coal to the flames to keep ourselves warm on cold winter nights. Let me introduce you to their cousin, used for industrial purposes – the crucible tong. But first, let’s stop the pendulum and go back to its origin, which will let us understand a crucible tong functioning better.

Man had stopped hunting in packs and started a civilization. The ancient Greeks were the most famous and cultured civilization in the world. But being surrounded by enemies, they needed a way out. Luckily, Hephaestus, the God of Weapons and Blacksmiths heard their request, and created the first weapon – the sword. He’s forever symbolized with an anvil and a pair of tongs. He even apprenticed students who wished to learn the art of forging.

Tongs aren’t just restricted to making weapons. But anything that lets us grip another container or surface is termed as one. Tongs have branched out to pincers, tweezers, and pliers. Tongs have been used on the battlefields for removing splinters stuck in horses. They have been used for domestic purposes for serving food.

But crucible tongs are of a different variety; they handle crucibles or containers with high temperatures. They have been used to hold raw steel while a blacksmith gives it shape, pounding on it, straightening the blade, giving it perfection. The blacksmith is primarily responsible for this invention, as he needed it to hold the iron/steel liquid that could be poured into the mound that gives the sword its perfect shape.

A crucible tong is basically a device used to handle crucibles, which are containers which can withstand high temperatures. It looks like an elongated scissor with the ends forked out to handle any container with a grip. They have insulated grips for safety purposes. These tongs are usually made from brass, nickel, and stainless steel. Tongs were even made from platinum, since this metal can very well handle the heat. Alumina, zirconia, and magnesium can tolerate the highest temperatures, and are in good use today for the manufacture of crucible tongs.

▶You can use tongs to pick up flasks, beakers, and test tubes in a laboratory, as the concentration of acid in the chemical concoctions filled in them is just too high.

▶Glass and metal factories use crucibles on a daily basis. Operators can select the appropriate size, including the two-person version which is pretty heavy to handle.

▶Crucible tongs should always be handled with leather gloves.

▶They need to be kept at a dry place after being washed regularly to remove oil, dirt, and other impurities.

▶Make sure that these are never used for any electrical purposes, as they are not shock-resistant.

Crucible tongs were probably inspired by the pincers of crabs, as they used it to grab their prey and also for defense purposes. The next step for this evolutionary invention has already been taken in the form of clamps, cranes, and robotic hands. 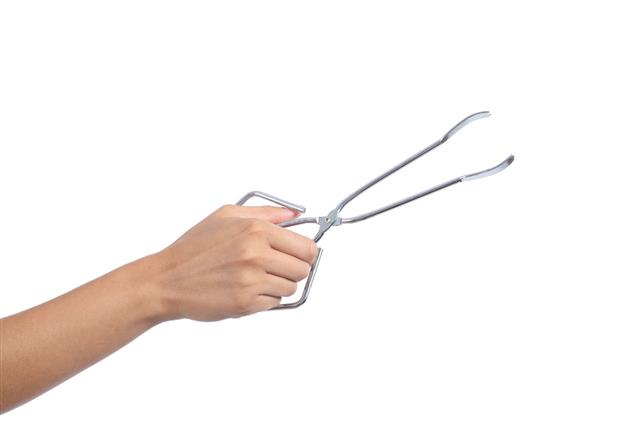