12 Types of Ecosystems You Should Know About, But Don’t 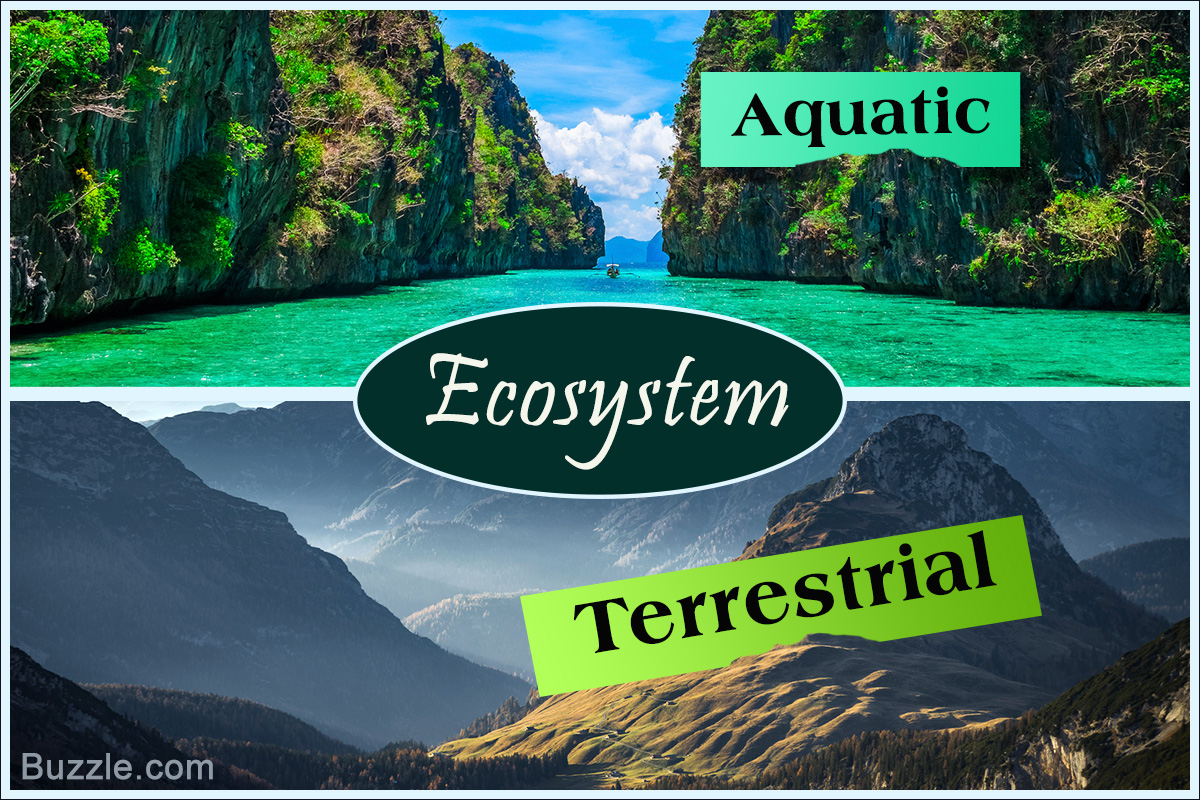 Life on Earth is categorized under specific levels of organization, depending upon various factors of different organisms such as complexity, type, population, and adaptation to a specific biome. Ecosystems are considered one of the highest ranks of co-habitation, which encompasses our planet in the form of a single level called Biosphere.

The combination of biotic (living) and abiotic (non-living) parameters along with communities of organisms is defined as an ‘ecosystem’. This bio-geochemical entity is so complex, that till present, complete data of any particular type has still not been obtained. Biotic factors include all the plant and animal species, along with organisms that are categorized as bacteria, fungi, algae, etc. Abiotic factors include sunlight, atmospheric gases (nitrogen and oxygen), geomorphic features (landforms), nutrients, climatic factors (rainfall, storms, humidity), etc. The concepts of food web and food chain come into play during adaptation, which is a major driving force of our planet.

The basic level of any ecosystem is called the producer, and this level mainly consists of autotrophic plants (the ones capable of photosynthesis). These plants absorb nutrients from the soil, and with the help of sunlight synthesize carbohydrates to form glucose molecules. These compounds are further used for energy generation, along with water and carbon dioxide. The next levels consist of primary, secondary, and tertiary consumers, each of which depend on the lower ranks for food and energy. Apart from this, another class of organisms called detritivores (for example, fungi, and bacteria) exist in every ecosystem, which help in the decomposition and degradation of dead organisms. This helps in releasing nutrients back to the Earth’s surface, wherein the cycle starts again. Energy is transferred from the lower to the higher levels, as the complexity goes on increasing.

Differentiating the various environment of habitation is possible if one has the basic knowledge of all the relevant parameters. The 12 types of ecosystems and their characteristics are described in brief, in the following sections.

The type of environment which is characterized by a particular water body (for example, oceans, lakes, estuaries, etc.), along with the interacting biotic and abiotic factors is called an aquatic ecosystem. It encompasses the largest group of biomes on our planet, both in terms of size and diversity, and is broadly classified into two types―Marine and Freshwater ecosystems.

It is distinctly recognized as the first environment that formed several million years ago. Oceans and seas cover around 70% of the Earth’s surface, and saline water accounts for about 98% of the total water present on our planet. Seas, lagoons, estuaries, coral reefs, etc., are all covered under this vast ecosystem. Broadly speaking, it is subdivided into two types: 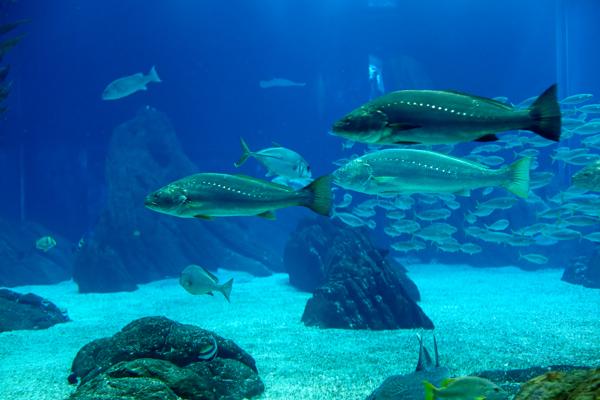 It includes the oceans and seas, as well as continental shelf, continental slope, bathyal, abyssal, and hadal portions at varying depths. The producers are mainly zooplankton and phytoplankton, which are consumed by the upper trophic level organisms, thus aiding the energy flow. Dominated by fish species, organisms belonging to other classes such as cephalopods, mammals, echinoderms, anthozoans (corals), etc., are also present extensively in ocean waters. Different kinds of algae and sea weeds thrive in the shallow marine waters. For example, the Pacific and Atlantic oceans show a large diversity of marine organisms. 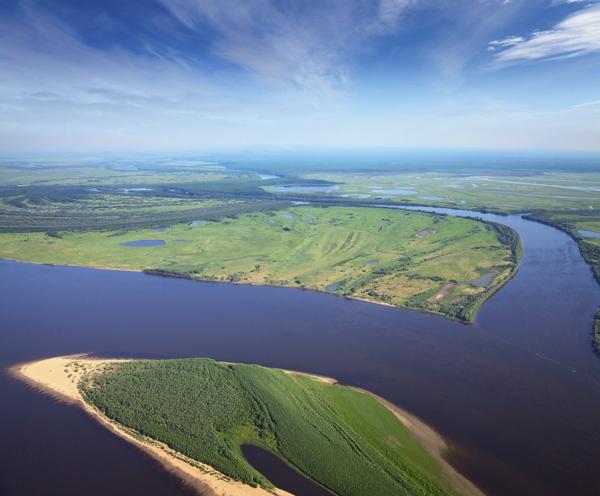 The regions where freshwater bodies open out or join marine water are called estuaries, and they represent a transition between freshwater and saline water environments. As numerous tons of alluvial and nutrient-rich material is carried by rivers and streams onto the coastal areas, estuaries show high diversity than that of the deeper portions. Estuaries may be shaped like a lagoon, fjord, or a V-shaped valley, and they can be said to have tectonic as well as geomorphic origins. The major transitional ecosystems present around the world are found at the Amazon River Estuary, Delaware Bay, San Francisco Bay, etc.

About 2% of the total water on Earth is present in this type of environment, which includes rivers, streams, lakes, and melting glaciers. Characterized by less content of salts as compared to the ocean environment, biochemical processes have given rise to various floral and faunal species, including the endemic ones. This category is classified into the following sub-ecosystems: 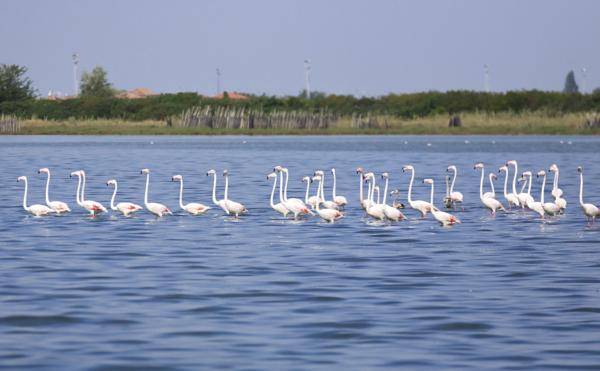 These environments are classified under the lotic category (flowing water), and they undergo continuous physical changes. These changes mainly consist of weathering and erosion, sometimes permanently changing the landscape. Abiotic factors, such as the amount of sunlight, surrounding temperature levels, flow rate of the stream/river, and biochemical reactions control the existence of flora and fauna in this ecosystem. Often, river and forest ecosystems occur in the same region. Major examples include environments surrounding the rivers Amazon, Nile, Ganges, Colorado, etc. 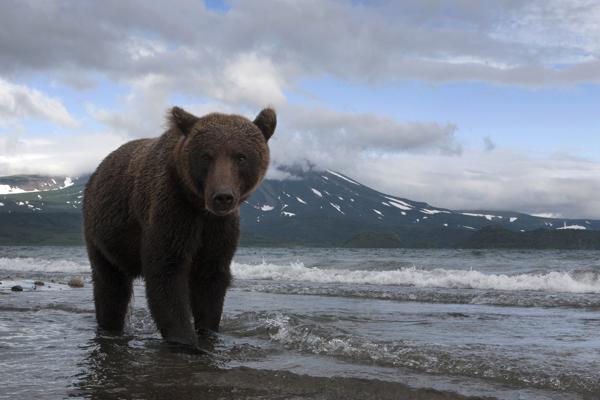 Classified under lentic (still water) environments, lake or lacustrine ecosystems are the largest ones in this category. With similar biotic and abiotic factors as that of the river systems, lakes are often associated with rivers, if present in the same region. The temperature range of lakes varies more than that of rivers, as circulation of the non-flowing water within the lake body takes place throughout the year. The bio-chemical reactions that lead to a higher nutrient productivity during summer seasons aid in increasing the community of plants and animals in this ecosystem. For example, the Lake Baikal, Lake Superior, the Great Bear Lake, etc. 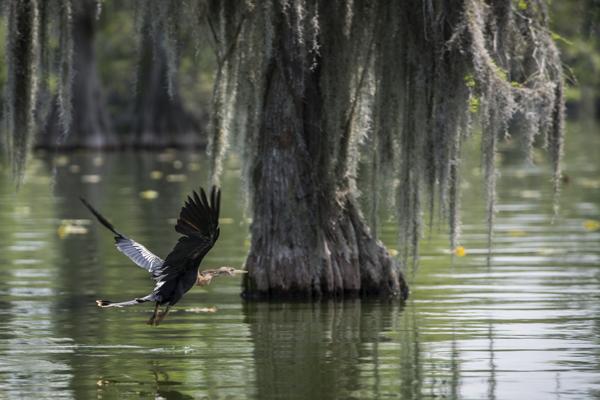 They are more or less a transitional type of ecosystem, wherein both aquatic as well as terrestrial aspects come into play. This type of environment is a result of saturation or stagnation of water, as flow is restricted. Except Antarctica, marshes are present on every continent of our planet. This ecosystem is characterized by the typical species of plants and animals found in those areas. Mangroves are typical plants, whereas frogs and crocodiles commonly thrive in swamps. For example, Everglades in North America, the Sunderbans in Asia, Amazon River marshes, etc. 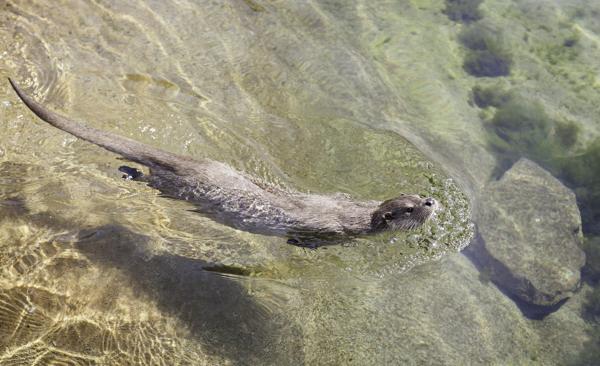 This ecosystem is classified under the lentic category, and is often associated with lake and river environments. Ponds are mainly dived into four layers―surface layer, open water layer, bottom/bed layer, and vegetation layer. The first three are located according to the decreasing depth, whereas the vegetation layer is mostly found near the pond boundary. Plants such as lotus, lily, water hyacinth, etc., can grow in such environment. The faunal class is dominated by frogs, turtles, and insects like water striders. For example, such ponds can be found in forest areas, deserts, and grasslands in the form of water holes.

Land surface accounts for about 30% of the total area of our planet, and several types of biomes and ecosystems occur on the continental regions. Often existing in combination with aquatic systems, the land flora and fauna are completely different from the marine ones. The major terrestrial ecosystems under this category are described below: 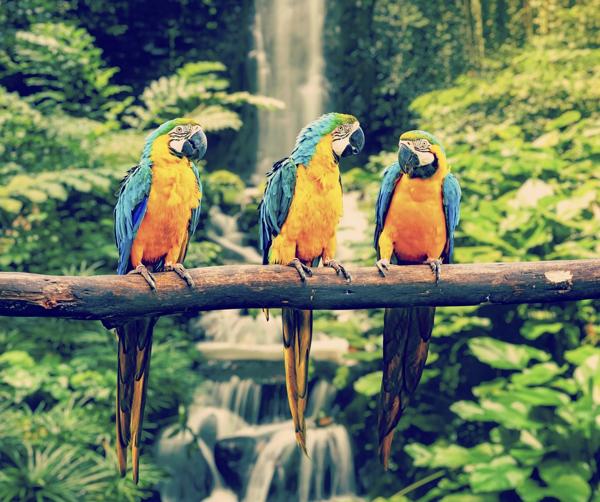 Though theoretically categorized as a land ecosystem, forests consist of various sub-environments like rivers, lakes, and mountains. These regions produce the highest amount of oxygen on our planet. Numerous biochemical reactions and changes help in the adaptation of organisms in such areas. This ecosystem shows one of the highest biodiversity as compared to other types, especially the rainforests. Energy transfer is best visible in the food web of forest flora and fauna. The main examples of such an ecosystem―Amazon rainforest, Colorado Rockies Mountains, Congo River Basin, etc. 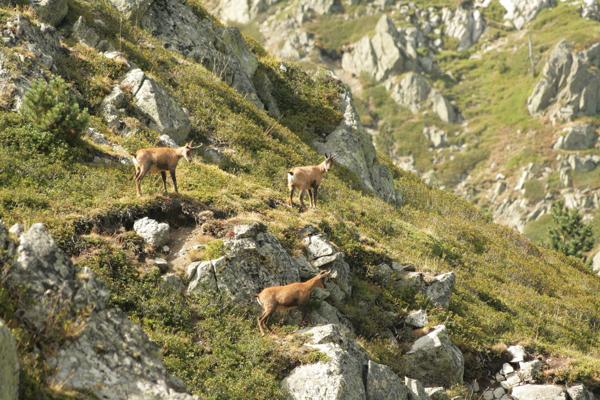 This is one of the least diverse-ecosystems in the world, as very harsh conditions are mostly present. Consequently, a small food web, along with less energy flow occurs in such an environment. Often, factors like temperature, atmospheric pressure, sunlight intensity, etc., control the adaptations of a specific organism, in order to survive in this ecosystem. Mountain goats, eagles, and wolves are commonly found in the mountainous areas. For example, the Andes Mountain Range, the Himalayas, the Alps, etc. 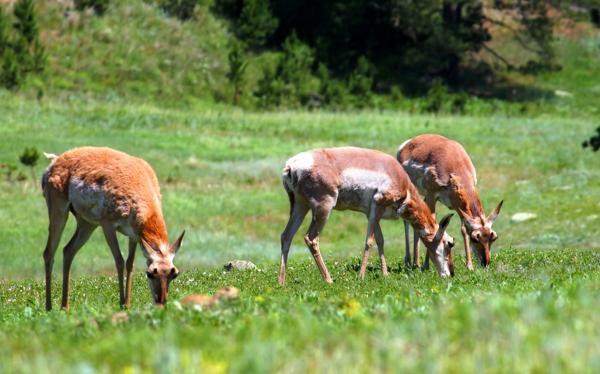 Another kind of broad-area ecosystem, grasslands are characterized by typical factors such as moderate temperature, moderate to high rainfall, efficient nutrient recycling, and dominance of vegetation. The interaction between abiotic factors such as plains and plateaus, sunlight, and particular soil types along with the biotic parameters result in the occurrence of a complex, yet dynamic environment. The major examples on our planet include the Steppes, Prairies, and the Savannah grasslands. 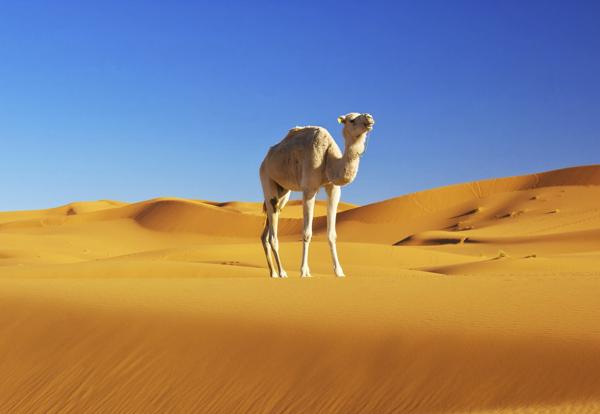 This ecosystem is strictly restricted to continental regions, and the role of aquatic environments is very less in such areas. Deserts are characterized by scanty rainfall, very less vegetation, and extreme temperatures, and are divided into two subtypes―hot deserts and cold deserts. The former include high temperatures and arid landscapes, while the latter includes perennial snow and temperatures that go below zero degrees. Major examples of both the desert types are: Nevada-Arizona desert, Sahara desert, Antarctica Ice Sheets, Gobi desert, etc. 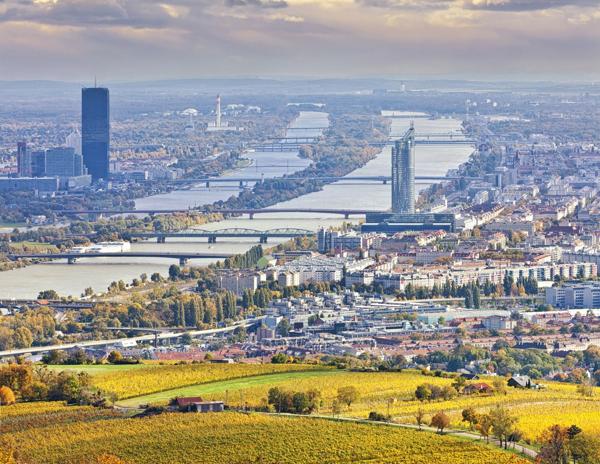 This is a controversial kind of terrestrial ecosystem, which often dominates over the other types for basic growth and development, along with the increasing community size. Simply put, the habitat or environment has been artificially developed by humans, along with the combination of agricultural aspects, crop fields, commonly found species of vegetation, and domestic animals. This ecosystem consists of various communities, and can be said to be the only kind that is continuously expanding in terms of diversity. For example, cities and towns present near less inhabited regions like San Francisco and Arizona (wilderness areas are present near both these cities). 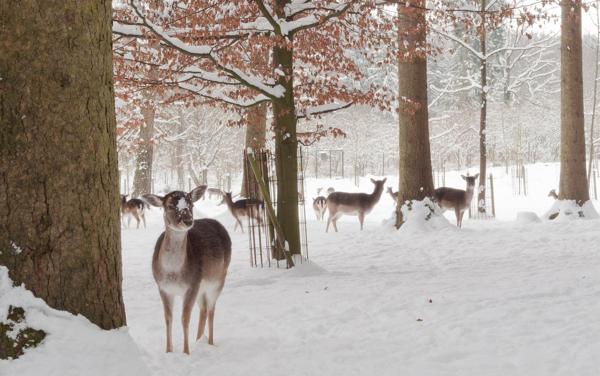 These ecosystems are often clubbed together under a single category, but they differ slightly on a few factors. They are present above/below the 60 degree latitudes of our planet, and are characterized by the presence of snow, either seasonally or perennially. The Taiga ecosystem is situated a bit below the Tundra one; the latter mostly has snow throughout the year. The temperature factor is very important in such environments, regarding nutrient cycling and growth. Plants and animals like spruce, pine, fir, snow leopard, moose, polar bears, etc., are seen in such areas; they can withstand the harsh and extreme conditions. For example, Alaska, Siberia, Greenland, Iceland, etc. 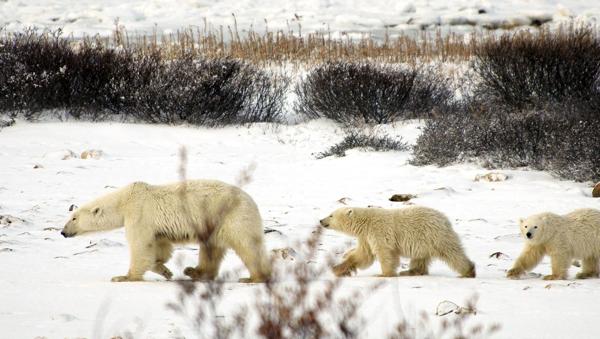 The above-described types of ecosystems make us understand the dynamic and vibrant ways of nature on the Earth. The man-animal conflict has escalated in the last few decades, as humans try to dominate few niches of every ecosystem (in the form of poaching, deforestation, and pollution). This ultimately affects the survival of particular organisms, and in extreme cases, may lead to their extinction. As the most intelligent race on Earth, we should ensure that equilibrium is maintained in the biosphere, so that future generations are not affected by our destructive actions.