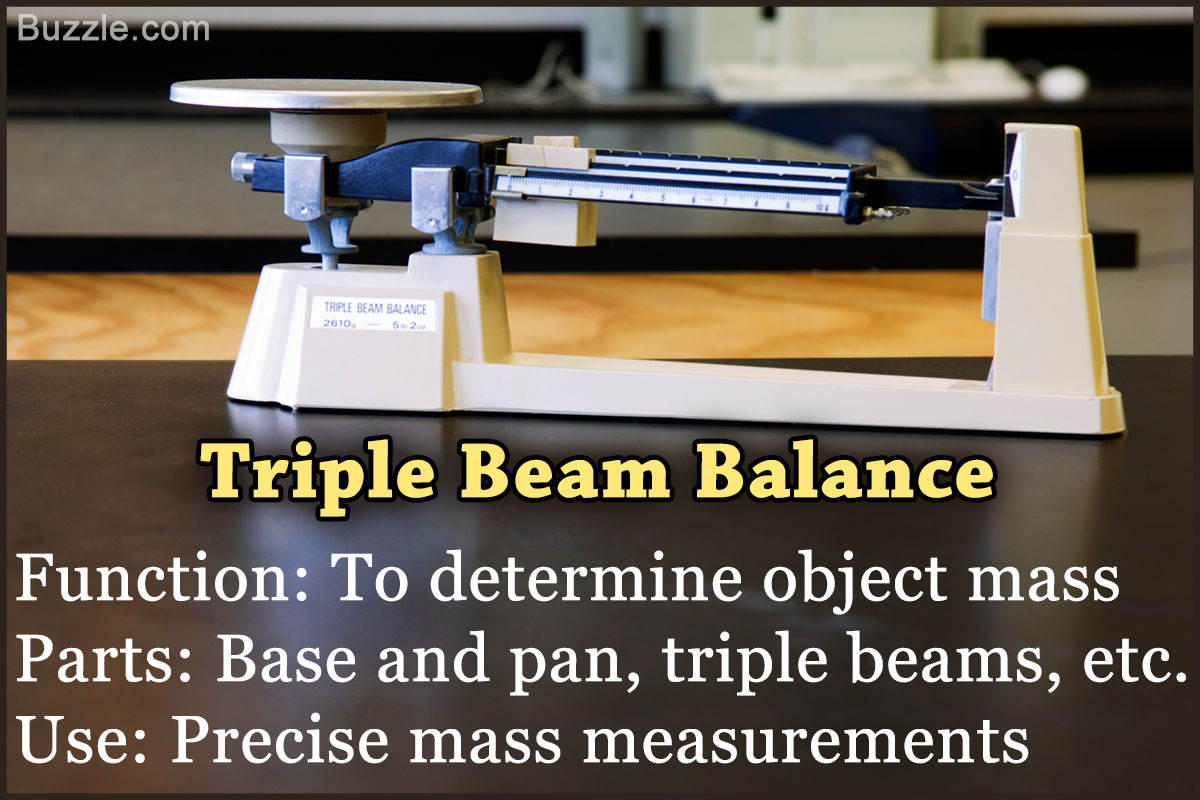 A triple beam balance measures the mass and not the weight of an object. Unlike the traditional spring balance which measures weight, the triple beam balance doesn’t rely on gravitational force. It is therefore capable of giving the same mass reading on the Moon as it would on Earth, even though the Moon’s gravity is only 1/6th that of the Earth’s.

In science, especially in the fields of physics and chemistry, accurate measurements is a very important criterion for study and experimentation. Many chemical reactions depend upon precise measurement of the weights of the ingredients, without which they simply wouldn’t work. For this, several different weighing devices have been developed over the years.

The triple beam balance is one such weighing device, which allows the user to accurately gauge the mass of an object in grams. It can provide higher accuracy than a spring-based measuring scale, and has an error margin of only 0.05 gm. Therefore, it is primarily used as a laboratory apparatus.

In the following sections, we shall examine the different parts of the triple beam balance and then take a look at its functioning.

The triple beam balance is a measuring instrument comprising a beam supported on a fulcrum. On one side of this beam, is a pan on which the object to be measured is placed, while on the other side, the beam is split into three parallel beams, each carrying a known weight and together culminating into a pointer pointing to a fixed scale. The weights are slid on their respective beams until zero reading is obtained and a state of balance is achieved.

Parts of a Triple Beam Balance 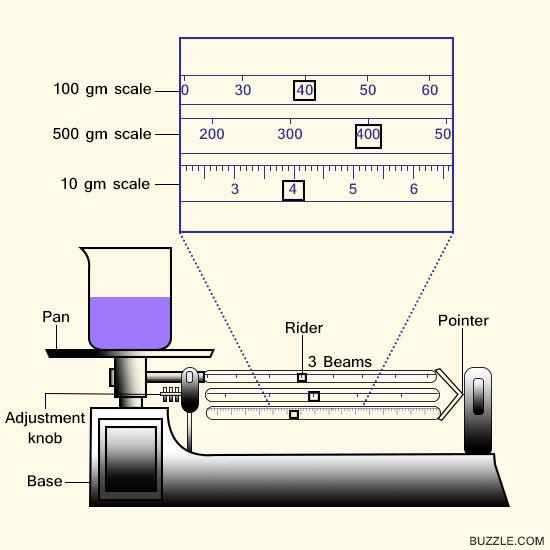 The solid metal platform which supports the rest of the parts of the triple beam balance is known as the base. It provides stability to the apparatus while the measurements are being taken. The pan is located on one side of the apparatus and rests on top of the base. It is where the object to be weighed is placed.

The adjustment knob is present on the left hand side of the apparatus, beneath the pan. It can be turned to attain greater accuracy while measuring the weight of an object using the triple beam balance. The pointer is present on the right hand side of the triple beam balance. By default, it points to zero on a labeled scale. Together the pointer and the scale are used to ascertain when the beams are at their resting position and when the correct mass of an object has been found.

As the name of this apparatus implies, the triple beam balance comprises three beams which are individually used to determine the mass of an object. Each of these three beams has a weighted rider on it, which the user can slide along the length of the beam to determine the object’s mass. When positioned such that the pan is on the left hand side and the scale and pointer to the right, the beam which is located on the front has a 10 gm scale and a 0.1 gm rider on it.

The second beam which is located in the middle, has a 500 gm scale with 100 gm rider on it. The third beam, located at the back, has 100 gm scale with a 10 gm rider. When all three riders are positioned completely to the right, their combined weight equals 500 gm + 100 gm + 10 gm = 600 gm. This is the maximum weight that the triple beam balance can measure.

Keeping the pan empty, move all three riders on the three beams to their leftmost positions. Check the pointer and scale to ensure that it reads zero. If it doesn’t, then calibrate the scale by turning the adjustment knob until a zero reading is obtained.

After calibration, place the object to be measured on the center of the pan. The pointer will move away from the zero reading.

Slide the 100 gm rider to the left slowly from notch to notch, until the pointer drops below the zero mark. At this point move the rider back a notch. For example, if your object weighs 485 gm, then the pointer will drop below zero when the rider is put on the notch representing 500 gm. So you will have to slide it back to the 400 gm notch.

Lastly move the 1 gm rider slowly on its beam until the pointer aligns at zero. Note that this beam doesn’t have notches and so, while sliding the rider along it, you have to keep an eye on the pointer and stop as soon as it reaches zero. Taking the above example, the pointer will read zero when this rider reaches 5 gm.

Take the total of all the three numbers indicated by the positions of the three riders to get the mass of the object on the pan.

Thus, the triple beam balance is a very ingenious and user-friendly device, that can be used to correctly and precisely measure the mass of an object. It is a popular choice in most physics and chemistry laboratories, and hence, knowledge about its use is essential for students.