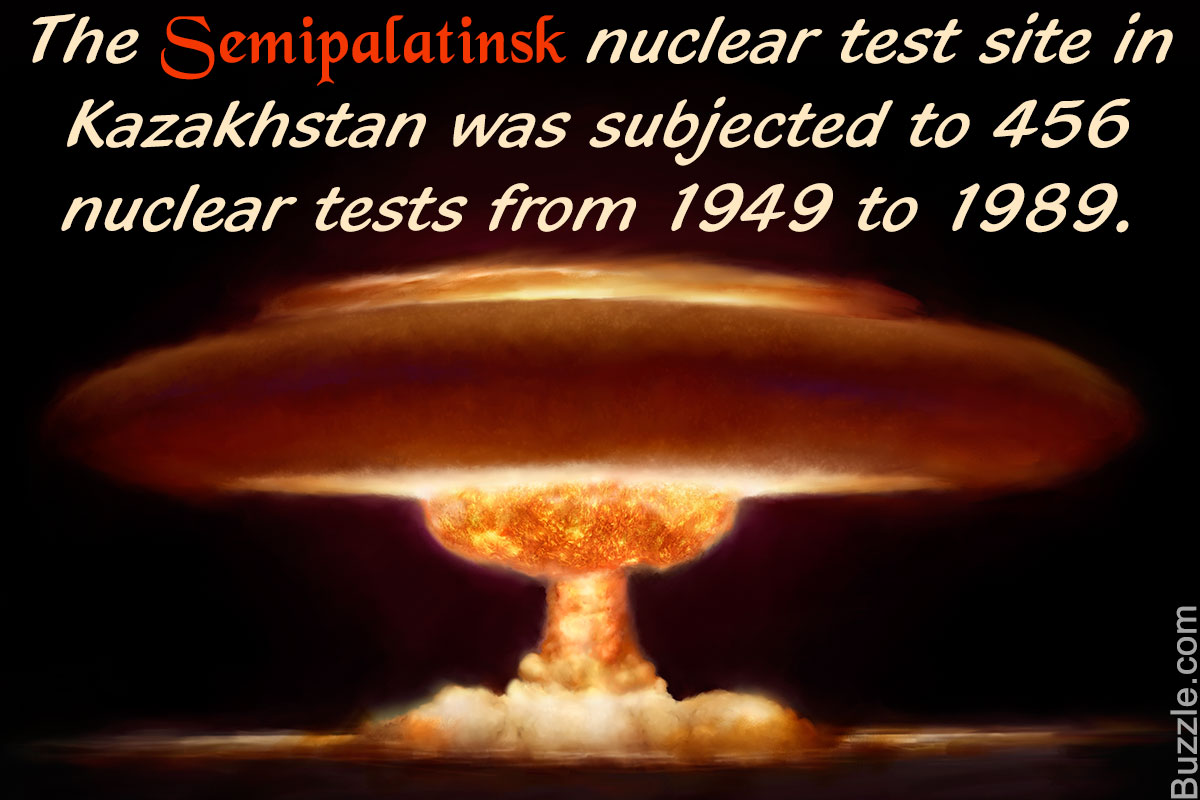 Semipalatinsk, also known as "The Polygon", was a nuclear testing site for the former Soviet Union. The site was actively used for a period of 20 years, during which multiple nuclear bombs were detonated.

Kazakhstan is the first country to have voluntarily given up nuclear weapons technology.

Nuclear weapons were first developed by the United States of America, and used during World War II in an attack on the Japanese cities of Hiroshima and Nagasaki. The long-lasting devastation that ensued has left an indelible mark in history, since it not only caused territorial damage and loss of lives, but it also contaminated the area with radioactive fallout, which had an impact not only on the surviving population but also on their subsequent generations in the form of health disorders, birth defects, deformities, etc. More than 60 years after the nuclear detonation, the area is still uninhabitable, and the descendants of the people from those cities continue to exhibit health disorders. But these cities are not the first and last example of nuclear destructiveness. 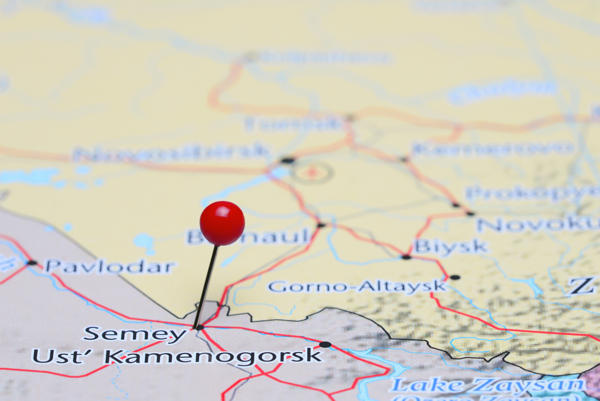 Regrettably, yet another city has suffered a worse fate. It is the city of Semey, formerly known as Semipalatinsk, and also known as “The Polygon”. This city was formerly part of the Soviet Union, and currently is a part of Kazakhstan. In a bid to compete with the United States and successfully develop their own nuclear weapons, the Soviet Union carried out extensive testing of nuclear bombs.

The extensiveness of the testing is evident in the fact that in just a period of 40 years (1949-1989), the Soviet Union managed to detonate and test around 456 nuclear warheads and missiles. Also, the collapse of the Soviet Union caused Kazakhstan to inherit over 1,410 nuclear warheads (fourth-largest nuclear arsenal in the world). In the later years, Kazakhstan returned the arsenal of warheads back to Russia, and signed anti-nuclear treaties like the nuclear non-proliferation treaty, the comprehensive test ban treaty, and also helped establish the central Asia nuclear weapon free zone.

Immediately after World War II, the cold war began between the Soviet Union and the allied forces, mainly the United States. This instigated the Soviets to develop nuclear weaponry to rival and even surpass that possessed by the U.S. With such a view in mind, the Semipalatinsk site was selected by Lavrentiy Beria, head of the Soviet atomic bomb project, who claimed that the vast steppe region was ideal for testing as it was completely uninhabited. But as is now obvious, his claims were false.

To develop the testing site, the area was isolated and the entry into and out of the site was restricted to high ranking government and military officials (politburo). Workers from Gulag camps (Russian camp for prisoners of war) were employed and charged with constructing the various buildings and facilities that included laboratories as well as underground bunkers and testing arenas.

On 29th August 1949, the first Russian nuclear bomb was detonated at the testing site. It was called “First Lightning” or “RDS-1” by the Russians, but the Americans refer to it as Joe-1, a reference to Joseph Stalin. The success of this test made the Soviet Union the second nation (after the US) to successfully develop and detonate a nuclear bomb. This success inspired better research, which ultimately culminated in the manufacture of Joe-4, a thermonuclear weapon produced by the Soviet Union.

This was tested successfully on 12th August 1953. Its detonation released an energy of 1,700TJ, which is equivalent to the detonation of 400 kilotons of TNT. Over the course of the next 4 decades (1949-1989), many more such tests were carried out, above ground as well as underground. Of the total 456 detonations, approximately 340 were underground explosions, while 116 were atmospheric explosions that resulted in the formation of the characteristic mushroom clouds.

This extensive testing caused the area to be highly saturated with nuclear radiation, causing it to become the world’s worst radiation hotspot. What makes this worse, is that the area was never completely inhabited, but possessed populations of rural citizens. Also, according to some recently declassified documents, the site was purposefully used as a site for not only testing nuclear weapons, but also testing the effect of the detonations on buildings, infrastructure, and people. Due to the events of Hiroshima and Nagasaki, the Russian researchers were interested to investigate the effects of radiation exposure on humans. In addition to this inhuman research, if the citizens sought treatment, they were merely subjected to biological tests, and prescribed mild medications that could offer some relief but would not treat the actual condition. Meticulous reports were made of each individual and used for analysis. 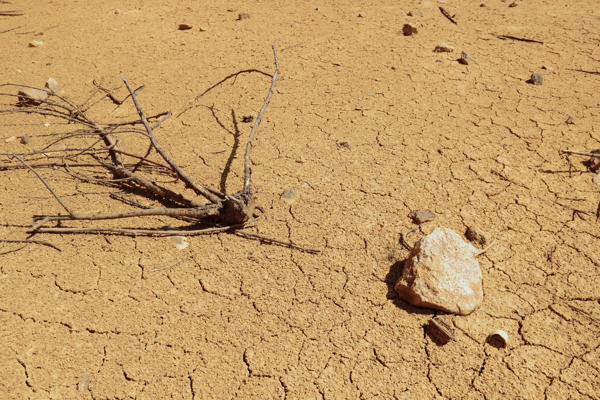 The soil, air, and land of the area remain highly radioactive, and experience radiation that is 10-20 times higher than normal. The accumulation of radioactive polonium over the 40 years of testing has rendered the top-soil of the area completely contaminated. The atmospheric explosions (specially those followed by rainfall) acted to spread the radioactivity over a vast distance. All flora and fauna in this region was affected, and hence led to the desertification of the area.

Similar effects were observed due to underground detonations. The underground blasts irradiated all ecological microfauna and helped in accelerating desertification, causing the area to be a vast barren expanse of contaminated soil and air. 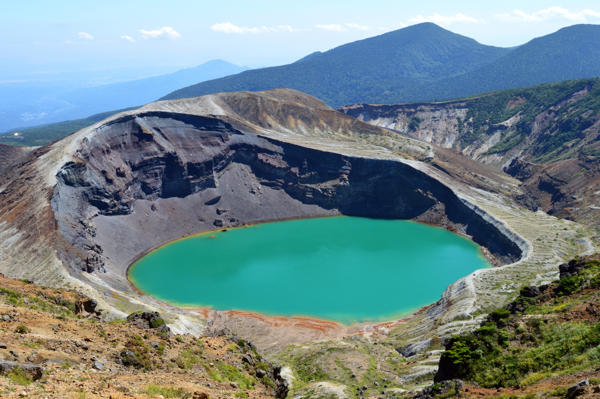 The most prominent effect was seen in the form of the lake created due to the underground nuclear explosion on 15th January 1965. The bomb was equivalent to 140,000 tons of TNT, and caused the formation of a crater that was 408 m wide and 100 m deep. The radioactivity was so intense that it could be detected as far as Japan. The crater that was formed led to the creation of lake Chagan, also known as the “Atomic Lake”.

Its water source is the Chagan river, and it has a volume of 100,000 m3. It is highly radioactive and has an extremely high concentration of tritium and other radionuclides. The intense radioactivity causes the lake water to be non-viable, and hence, no living organism can be seen living in this water body.

The radiation has induced a variety of genetic defects, skeletal deformities, and medical conditions in the inhabitants of the area. According to surveys, approximately 1.5 million people have been affected by the testing at Semipalatinsk. The health defects range from cancers to birth defects and congenital deformities. Along with these, the children born to these individuals, are born with a wide array of neurological and developmental defects.

The children exhibit absence of arms, skeletal deformities, organ failures, neurological damage, cancers, and also hematological disorders. It is estimated that during the four decades of testing, the individuals were exposed to as much as 2000 mSv of radiation per year. To put this into perspective, the average U.S. citizen is exposed to only 6.2 mSv of radiation per year. The exorbitantly high levels of radiation have exhibited dire consequences for the health of the people of the area. The gravity of the issue does not lie in the observable health conditions of the people, but in the genetic errors that have been introduced in their genome.

This is severely devastating, since not only is the current generation suffering, but the future generations will also suffer radiation damage due to these heritable genetic errors in their genome. It is impossible to provide any sort of restorative treatment for this issue. In many cases, deformed and damaged children that are born to seemingly healthy individuals are left at orphanages to be cared for by the charity of others. The overall effect of these health conditions has had an impact on the basic quality of life, concept of family, and humanity. In an attempt to stop the proliferation and spread of these defective genes, some researchers have proposed the issuing of certain documents, called “genetic passports”, to the affected people. These documents would identify the people exposed to and affected by nuclear radiation, such that they may be discouraged from the proliferation of their genetic material (have children), or at least be aware that if they do reproduce, their progeny would suffer from numerous health disorders.

Most authorities and people oppose this notion due to its deterministic nature. The issuing of these genetic passports would be tantamount to giving a free rein to eugenics (improvement of human genome via selective breeding). But on the other hand, these documents will help in reducing the prevalence of radiation-based genetic errors in the population; and if the individuals do not reproduce, the effects of the radiation would not be transferred to younger generations. This dilemma remains unsolved due to its highly controversial nature.

The observation of all these alarmingly atrocious effects of nuclear weaponry has instilled an anti-nuclear sentiment in the people of Kazakhstan. So much so that, the Kazakh citizens initiated an anti-nuclear movement called “Nevada Semipalatinsk” in 1989, which culminated in the closure of the testing site in 1991.

According to UNESCO, this movement played a vital role in presenting the need to fight against nuclear threats, globally. Kazakhstan has also played an important role in the formation and signing of various nuclear disarmament treaties among the nations of the world. The destructiveness of nuclear weapons is aptly captured in the following quote.