The Theory of Continental Drift is Sure to Stir Your Curiosity

A close look at the world physical map will leave you surprised noticing that all seven continents fit together like pieces in a child's jigsaw puzzle. This very fact forms the basis of an interesting hypothesis known as the Continental Drift Theory. 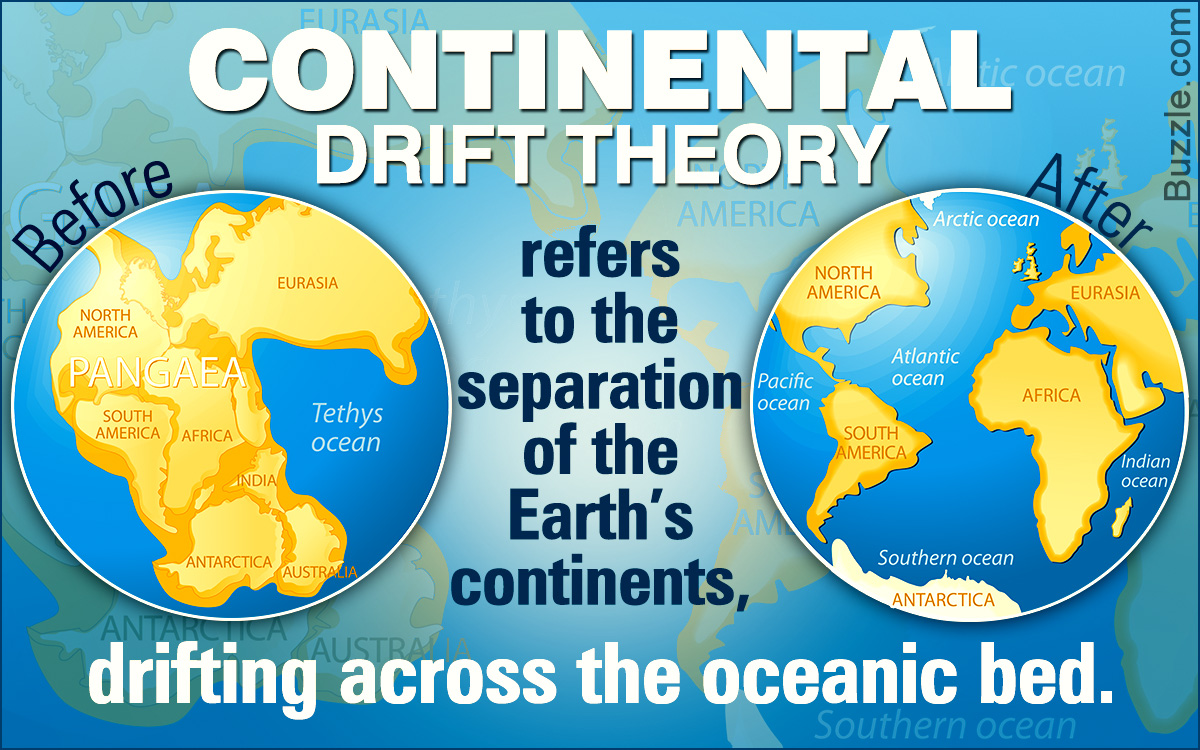 A close look at the world physical map will leave you surprised noticing that all seven continents fit together like pieces in a child’s jigsaw puzzle. This very fact forms the basis of an interesting hypothesis known as the Continental Drift Theory.

Browsing through the world atlas will show you a total of seven continents on Earth, namely Asia, Africa, Europe, North America, South America, Australia and Antarctica. The continents of Australia and Antarctica are way apart from the other continents. But continents like Asia and Europe are a single landmass, which is why, they are also known as Eurasia. Until recently, Africa was connected to the Eurasian landmass on the north-eastern end of Egypt. Africa was broken away from Eurasia with completion of the famed Suez canal in 1869. On the other side of the world, the continents of North and South America had been a conjoined landmass, until they were separated by Panama canal in 1914. Does that mean that all the continents were previously a single massive landmass?

Proponents of the Theory

One of the oldest proponent of this theory happens to be Abraham Ortelius. This 16th century Flemish geographer stated that the continents of North and South America were “torn away from Europe and Africa … by earthquakes and floods”. He suggested that traces of this rupture reveal themselves if someone brings forward a world map and scrutinizes the coasts of these three continents.

A similar hypothesis was proposed by German Physicist Alfred Lothar Wegener in the year 1912. Wegener’s Theory was initially rejected, but by late 1950s, there were considerable supporters to the Continental Drift Theory.

An Overview of The Theory

The theory refers to the movement and gradual separation of the Earth’s continents by drifting across the oceanic bed. In a hypothesis dated 6th January 2012, Wegener proposed that there was a single landmass on Earth’s surface before the continents drifted apart. This single supercontinent has been named ‘Pangaea’ for reference purposes. Interestingly, formation and dispersal up of supercontinents is said to be a cyclical process that has been changing the face of Earth for more than 4.6 billion years. These merger and dispersal cycles have profound effects on the sea level, global tectonics and climate. It is interesting to note that the Earth has an Icehouse climate during merger of continents and a Greenhouse climate when supercontinents are breaking away. It is estimated that there have been several such merging and dispersal cycles before formation of Pangaea. There are predictions that some of the first supercontinents were Vaalbara (3.6 bn years ago), followed by Ur (3 bn years ago) and Kenorland (2.7 bn years ago). The theory further states that a supercontinent called Nuna or Columbia was formed some 2 Gya (giga) years ago. The Nuna drifted apart and reassembled to form the Rodinia supercontinent some 1.1 billion years back. The subsequent supercontinents were Pannotia and the more recent Pangaea. It is difficult to predict the exact shape and outline of the previous supercontinents. However, the supercontinent Pangaea might have looked like the figure on the right.

Stages in Dispersion of Pangaea

The theory states that break up and dispersal of supercontinent Pangaea took place in 5 major stages:

During this stage, a major portion of Pangaea was a single landmass, while rest of the Earth’s surface was made of oceans. Theory states that the Pacific ocean was on the western coast of this supercontinent, while the Tethys ocean was on the Eastern coast.

The drifting process might have started around this time.

This stage took place around 200 million years ago. According to the theory, two major landmasses were formed from the drifting process.

A single landmass called Laurasia, consisting of present day North America, Europe and Asia, was located in the north.

To the south, there was the other landmass, which was called Gondwanaland. This supercontinent consisted of the present day South America, Africa, India, Antarctica and Australia.

This is the third stage which is estimated to have happened about 150 million years ago.

Gondwanaland might have split into four sections. These sections include a conjoined (present day) South America and Africa along with Antarctica, Australia and present day India.

This stage is estimated to have taken place approximately 65 million years ago.

By then, the drifting process had made way for creation of the Atlantic Ocean in between the western and eastern landmasses.

Even today, the drifting process is still on, with the continents of Europe and North America shifting away from one another at the rate of almost 4 cm per year. In the next millions of years, a new supercontinent is likely to be formed with North America joining Asia from the eastern side and so on.

This refers to friction generated from subduction and/or downward movement of oceanic trenches.

The gravitation force exerted by the Earth’s core also plays a major role in pulling and pushing of the Earth’s tectonic plates. In fact, this is the reason why we experience earthquakes.

The gravitational force exerted by the moon on the earth’s surface is not just capable of creating oceanic tides. Over a period of time, these tides can drag the tectonic plates, gradually drifting the continents apart.

The rotational movement of our planet causes a Coriolis effect on the tectonic plates, thus moving them apart. The spinning and wobbling of Earth during this process, has an effect too.

There is a general tendency for landmass or tectonic plates to shift away from the north and south poles, towards the equator.

This theory has been proposed, rejected and accepted over a period of time. However, there are several evidences that can help prove that this theory is actually correct.

✦ There is fossilized evidence of primitive flora and fauna found on continents that have drifted far apart. Fossils of Lystrosaurus have been found in India, South Africa and Australia while those of Mesosaurus have been found in Western countries of Africa and Brazil. Fossils of predecessors of Ostriches, which are prominently found in Africa, have been found in India. Similarly, paleontologists have found fossils of primitive marsupials in western India. In present day, marsupials are prominently found only in Australia.
✦ On a closer look, one can find a matching geology on the parallel continents. One can find a similar geological trend on the western coast of Africa and eastern coast of South America. Similarly, one can observe a continuity in the mountain ranges from northern United States till Scandinavia.
✦ A polar ice cap pertaining to the carboniferous period is speculated to have covered the southern tip of supercontinent Pangaea. Even today, scientists can find primitive glacial deposits of this same ice cap scattered on different continents.
✦ A careful study reveals a continuity in location of coal mines located in Siberia and North America.

The Odyssey of Himalayas

The Himalayas are the youngest mountain ranges on Earth. They are the best evidence to prove that the theory is correct. The tallest peak in the world, Mt. Everest, is situated in the Himalayas. It is located at a height of 8848 mts.

India is considered to be a part of the Indo-Australian tectonic plate. The theory states that India and Madagascar were a single landmass about 70 to 80 million years ago. At some point of time, this tectonic plate broke into two sections. A smaller section called Madagascar remained near the eastern coast of Africa, while a bigger section of India moved upwards towards the Eurasian tectonic plate. As per the continental drift theory, the Indian tectonic plate collided with the Eurasian tectonic plate approximately 10 million years ago. The impact of this collision, uplifted the metamorphic and sedimentary rocks of both the tectonic plates, thereby forming the Himalayan ranges. Geographically, the Himalayas are termed as fold mountains. A proof of this hypothesis is that the rocks found at the summit of Mt Everest are categorized as marine limestone. The Indo-Australian tectonic plate is still in motion, thereby increasing the height of Himalayas by approximately 5 mm per year. On account of this, the Himalayan region is often quoted to be seismically active, making it earthquake prone.

Wasn’t that intriguing? We generally assume that we are standing on a very stable land surface. But even as you read this, the land under your feet is making a slow journey towards formation of a whole new super-continent. It will ultimately take millions of years for the process to complete and human beings may or may not be present to witness it. For now, it just feels good to know another interesting secret of Mother Earth.