The Precambrian Era: Fascinating Evolution of Life Forms on Earth 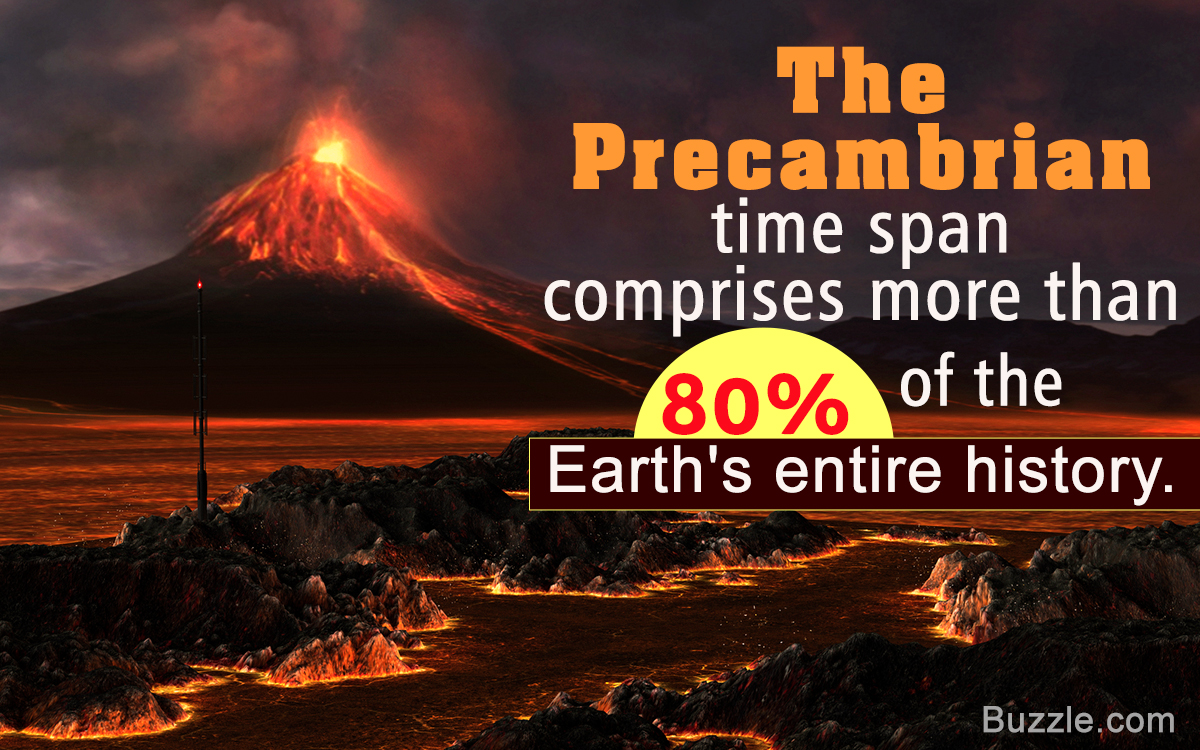 The Precambrian Era, or Super Eon, spans from the time of the Earth’s formation around 4,500 Ma, till the evolution of macroscopic shelled animals of the Cambrian Era. In spite of a poor fossil presence to support the vast geologic timescale, the unearthed specimens educate us over the earliest multi-cellular lifeforms which inhabited our planet.

According to the Giant Impact Theory, the Moon was formed at the start of Precambrian in the Hadean eon, when a celestial body impacted our planet. Rough estimates suggest that this body might have been the size of Mars, and is called ‘Theia’ after a Greek Goddess with the same name.

The Precambrian time refers to a geological timescale or a Super-Eon, which existed before the current Phanerozoic eon, an age prior to 550 million years ago. As this time span precedes the first period of the Phanerozoic, i.e., Cambrian, the prefix ‘Pre’ is added, thus forming the particular name. An eon is defined as a specific measure of lapsed time, which enables a more comprehensive study of the Earth’s dynamics since its formation around 4,500 million years ago. The Precambrian Super-Eon roughly accounts for around seven-eighths of the Earth’s history.

The beginning of this time span was characterized by conditions that were very harsh and extreme. Intense volcanic and seismic activity gave rise to extensive bodies of lava on the surface of our planet. In the early Precambrian years, the Earth did not have a stable crust. The cooling of magma, along with other tectonic activities like sea floor spreading, formation of ridges, and upheaval of rocks, lead to the formation of oceanic and continental crust.

Most of the Precambrian rocks are either heavily metamorphosed, or are destroyed by the forces of erosion. Thus, the fossils from this time-range have very less biostratigraphic use, and many more fossilized specimens still haven’t been excavated. As life was just beginning to evolve during this time, a few species would probably be existing on our planet, mostly unicellular organisms like protozoa, amoeba, cyanobacteria, etc. Microfossils of such organisms have been found in various Archean rocks, though chances of them being preserved for a few billion years are quite negligible. Another name for the Precambrian Super-Eon is the Cryptozoic Eon; the particular name is given, as even today, very less information about that time is available.

This eon is studied extensively to find a connection with the fossil remains of bacterial life, which dates back to nearly 3,460 million years ago. The era is believed to be characterized by the presence of bacterial lifeforms and other multicellular crustaceans. The time span is characterized by tectonic plate motions, formation of proto-continents, glacial periods, the Huronian epoch, and an atmosphere that showed decreasing gas content and cyclic increase and decrease in oxygen percentage. It is believed that the Earth, during the Precambrian era, had a reddish tint, and consisted of oceans full of toxic chemical compounds. The oceans were hosts to insoluble substances and evolving lifeforms.

As this Super-Eon is spread across billions of years, it becomes difficult to mark the boundaries of the associated divisions. Nevertheless, it is divided into three main eons: Hadean, Archean, and Proterozoic, marked by important events. These eons are further subdivided into various eras and periods. The eons are described in brief in the following paragraphs, starting with the oldest one.

Hadean eon is divided in the following eras, starting from the oldest one:

The first Eon since the formation of our planet, the name Hadean, has been derived from the underworld god ‘Hades’. Simply said, this time span is characterized by conditions that were hell-like, and it was impossible for life to develop and evolve at that time. Due to chemical precipitation and segregation of metallic ions in magmatic fluids, enormous quantities of metals like iron, magnesium, manganese, cobalt, etc., got deposited, and formed several igneous and metamorphic rocks. For example, the Banded Iron Formations found mainly in the cratonic regions of our planet provide us with an insight into the conditions that must have existed in those times.

Some of the oldest rocks on our planet have been formed in the Hadean eon, such as the Acasta gneiss (Canadian shield) and Jack Hills (Narryer gneiss terrain, Australia, Pilbara Cratonic rocks (Africa), etc. The oldest mineral fragments preserved till now have also formed in this time span (detrital zircons embedded in the Jack Hills rocks). The atmospheric composition was dominated by carbon dioxide and water vapor. 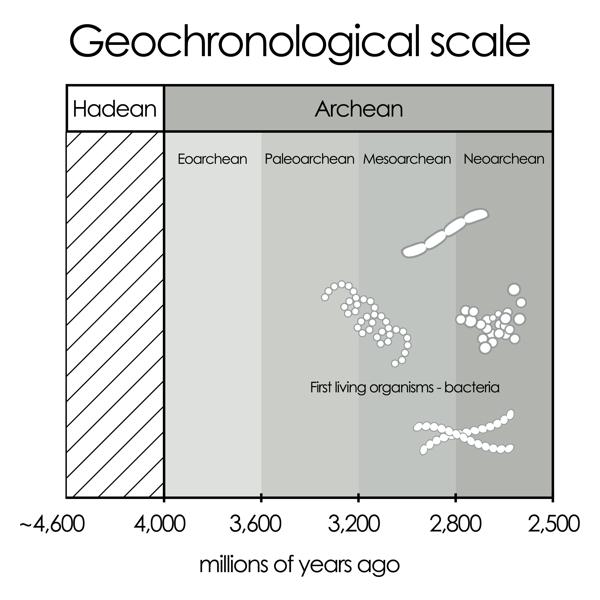 The Archean eon is subdivided into the following eras:

The beginning of this eon was marked by the emergence of life for the first time on our planet, along with subsequent cooling of the surface. Cratonic activity started advancing, and various igneous rocks like granites, komatiites, gabbros, etc., formed in the pre-crustal material. The Archean eon is also characterized by the beginning of plate tectonics and subsequent sea floor spreading. The Earth experienced an increase in meteorite impacts and volcanic activity. This eon saw the emergence of the first proto-continents.

Intense metamorphic activity started occurring on all the cratons, giving rise to the formation of metabasalts and associated greenstone belts. The various gneiss rocks and migmatites that show tight banding and swirling indicate presence of water, possibly as early as 3 billion years ago. Another evidence for formation of water in solution form is in the form of remnants of pillow basaltic lavas on the ocean floor. 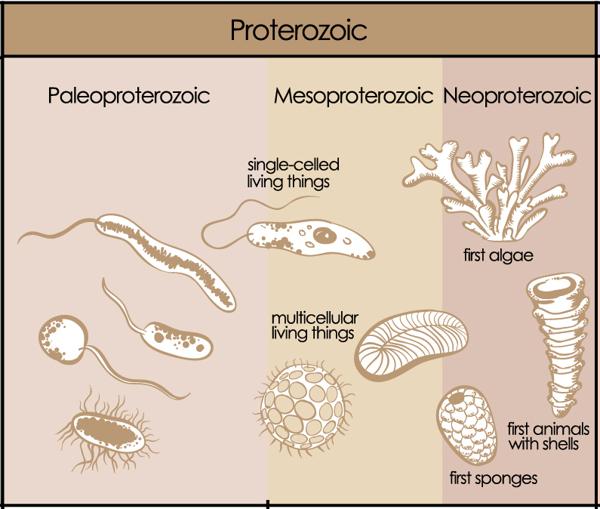 The Proterozoic eon is divided in the following eras:

Towards the end, this era witnessed a resurgence of atmospheric oxygen due to developing photosynthesis, resulting in an ecological crisis that is referred to as the ‘oxygen catastrophe’. At that time, atmospheric oxygen was an essential part of chemical reactions, and its percentage only decreased when a phase of low oxygen atmosphere started around 200 million years ago. This alternation of oxygen-rich and oxygen-free environment was a major characteristic feature of the Proterozoic eon.

Proterozoic fossils are mostly found in the banded iron rock formations, which were formed in an oxygen-rich environment. This can be inferred from the reddish-brown colored bands, which indicated that redox reactions were taking place in the environment on a large-scale basis, apparently resulting from the combination of iron and oxygen.

The Precambrian era also witnessed the collision of crustal blocks and the resultant formation of mountain chains. Most lifeforms that existed during this era were numerous forms of bacteria and algae. Blue-green stromatolites, multicellular metazoans, and the Ediacaran fauna thrived despite extremely harsh conditions. Traces of the Cnidaria order have been discovered in unearthed Precambrian fossils. Scientists believe that the Earth was more than 600 million years old when the earliest traces of life appeared on the surface.

This Precambrian timescale witnessed a lot of atmospheric activity and early evolution. It is synonymous with the cooling down of molten magmatic matter on the planet, subsequent development of a solid crust, formation of oceans, evolution of life in the primordial seas, formation of catalytic mineral-rich volcanic vents, and the birth of the first cell membranes. The Precambrian fauna comprised sponges and annelids, which faced widespread extinction due to the subsequent prolonged global Ice Age. This era witnessed the formation of the Earth’s lithosphere, atmosphere, and hydrosphere, along with a quantum leap in the evolution of the first microbes.