The taiga biome is characterized by long cold winter and short summer. The plants tolerant to snowfalls such as conifers, lichens, and mosses are predominant in taiga. Similarly, the animals having thick furs such as rabbit, wolf, and bear are commonly found in this biome.

The taiga biome is characterized by long cold winter and short summer. The plants tolerant to snowfalls such as conifers, lichens, and mosses are predominant in taiga. Similarly, the animals having thick furs such as rabbit, wolf, and bear are commonly found in this biome. 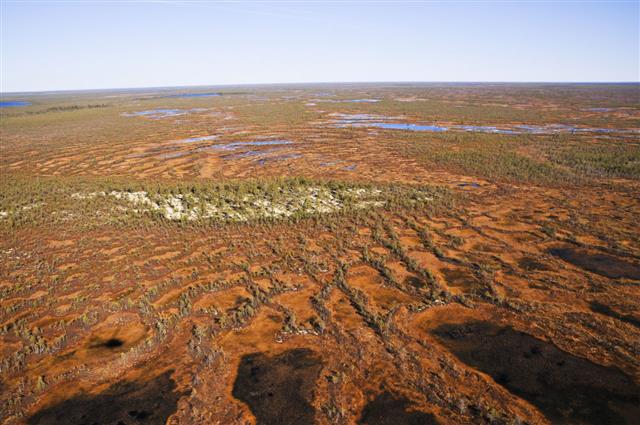 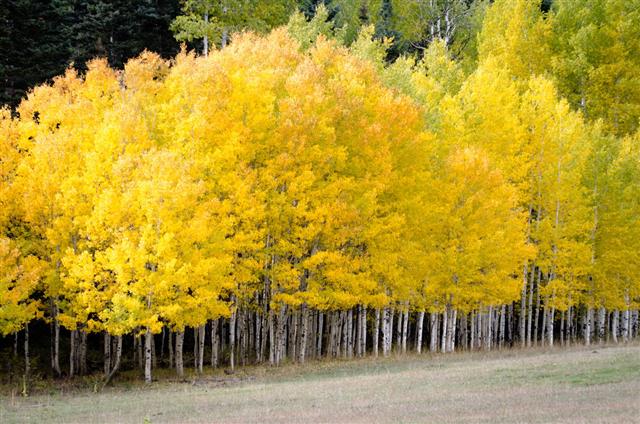 The taiga biome is the largest land biome on the Earth, extending to parts of North America and Eurasia. It lies below the tundra biome and is characterized by the cold climatic conditions, especially during the winter with continuous snowfalls.

Winter and summer are two major seasons in this biome. The temperature in winter months measures about -54 to -1 °C. In summer months, the temperature ranges from -7 °C to 21 °C, and the climate is warm, humid, and rainy. On an average, the temperature is below freezing point for almost six months in a year and annual precipitation ranges from 30 – 85 cm. As conifer trees and needleleaf forest are more common, taiga is also referred to as boreal forest.

Due to the harsh environmental conditions, not many plants can survive in the taiga biome. The common taiga plants are coniferous trees or evergreens with long, thin, and waxy leaves. The needle-shaped leaves reduce water loss and protect from weighing down by snow. These plants grow very close to each other, as an adaptation to protect from the cold snow and harsh wind. Other than these plants, lichens and mosses are also found in the taiga biome.

Spruce is a common plant which can grow to an astonishing height of about 25 meters. Black spruce is prevalent throughout the taiga due to its adaptability to grow in poor soil and cold climates. The tree branches are comparatively shorter than other conifer trees. Sharp needles of about half an inch long with four sides are a characteristic feature of this conifer. The bark is rough, thick, and gray-brown in color.

The pinecones of spruce are a major food for the birds in the taiga biome.

Balsam fir is a medium-sized conifer that grows up to the height of 80 feet. Balsam fir has a shallow root system that hardly reaches 35 inch. Very often, the lower branches of a tall balsam fir are dead and droop to the ground. The leaves are dark green above and white below, short (about 1 ½ inch long), flat with a distinct curve, and rounded at the tip. The barks of balsam tree are resinous, smooth, and gray in color.

Balsam Fir is a major food supplier for deer, moose, squirrels, and other inhabitants of taiga biome in cold winter months.

The jack pine tree grows to about 27 meters tall, while there are shorter, shrub species too. Young jack pine has reddish colored barks, whereas an older tree has gray barks. The branches are long and slender that bear needle leaves. These two characteristic features of jack pine allow them to adapt during the snowfalls and cold weather conditions. It is found in semi-cold regions of taiga with sandy soils. The pinecones develop near the branch and are curved at the tip.

Leaves and cones of jack pine are a source food for the rodents and other animals inhabiting the taiga biome.

Other taiga plants include paper birch, alder, larch tree, red cedar, white poplar, and aspen. Also, in some parts of the taiga biome, maple, elm, and willow trees are grown. The lowermost canopy (underneath the tall conifers) houses varieties of wild berries and roses. In the forest floor and swampy areas, moss is the significant vegetation. As the occurrence of wildfires in the taiga biome are very frequent, majority of taiga plants are adapted with thick barks.

The population of insects is the highest, followed by that of birds, fish, and mammals. Taiga animals have thick furs and other special adaptations. The taiga is a home for those birds, which feed on the conifer seeds and berries. Most of them migrate to nearby areas during snowfalls and food scarcity. When environmental conditions are favorable, the taiga animals return to their habitat.

Long-eared owl is a medium-sized owl that measures to about 35 cm in length. Its ears are not similar; one is about half times bigger than the another. This is an adaptation to hunt better in the dark conditions. Despite the name, this owl does not have long ears, rather it has long feathers in the head portion that appears like ears. Other identifying traits of the long-eared owl are yellow-colored eyes and black beaks.

Snowshoe rabbit is larger than the typical rabbit species. It measures about 20 inches in length and 3 – 4 pounds in weight. Snowshoe rabbit is named so, as the toes can spread out resembling like a snowshoe. The coat color is grayish brown in summer that turns into snow-white during the winter season, which helps them to protect from the predators such as wolf and lynx. Similar to other rabbits, it is herbivores and feeds on grass and other soft leaves.

Gray wolf, the biggest wild canine, is found in the taiga biome. It is easily identifiable by its yellow eyes and pointed ears. Gray wolf has rough and woolly fur coat that may be white, gray, brown, or black in color. Other adaptations of gray wolf include a sharp hearing and smelling sense with reflective retina. Male gray wolf is bigger than the female. They hunt in groups and feed on moose, deer, caribou, and other weak animals.

Black bear, found commonly in North America, lacks characteristic shoulder hump. It has round ears, short claws, and a short tail. Though majority of them are black in color, some may exhibit brownish or bluish color. The thick coat is an adaptive feature of this animal to survive in the taiga biome. Black bear is omnivorous and feeds on a wide variety of coniferous trees. Its food also consists of honey, carcasses, insects, and small mammals. 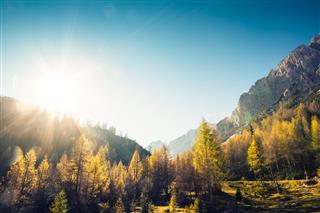 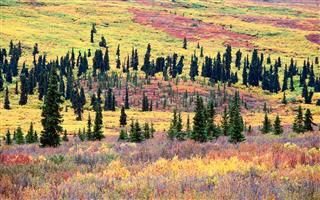 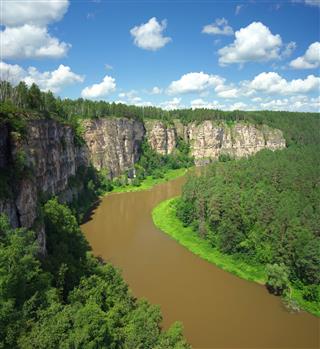 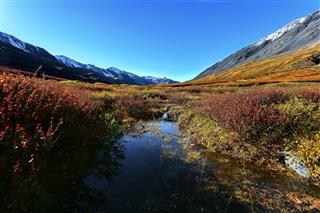