There are some basic concepts regarding the solar system that children can be briefed upon prior to assigning them a science project. Also, the concept of space, the universe, galaxies and the like, should be imparted to children at a young age so that later they do not face any difficulty in understanding these terms.

There are some basic concepts regarding the solar system that children can be briefed upon prior to assigning them a science project. Also, the concept of space, the universe, galaxies and the like, should be imparted to children at a young age so that later they do not face any difficulty in understanding these terms. 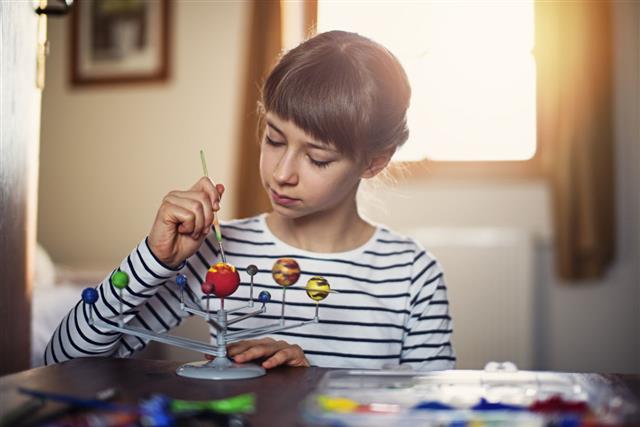 Our solar system consists of eight planets – Mercury, Venus, Earth, Mars, Jupiter, Saturn, Uranus, and Neptune, and their satellites. Right until 2006, Pluto was considered as the ninth planet in the solar system, but in accordance with the current formal classification of planets, it is no longer considered one. The moon is a satellite of planet Earth. It also consists of the sun, asteroids, comets, and interplanetary dust and gas. All these orbit the sun, it being at the center.

The planets are divided into two groups; the inner planets consist of Mercury, Venus, Earth and Mars (the smaller ones), and the outer planets consist of Jupiter, Saturn, Uranus, and Neptune (the larger ones). Jupiter is the largest while Mercury is the smallest planet in our solar system. Scientists believe that our solar system is about 5 billion years old. The sun is a large star and because of its ability to provide sunlight, life has evolved on the earth. Earth is also abundant in water, another element which is vital for plant and animal life to thrive.

To help students understand the workings of the solar system, you can assign them a project that sheds light on its various sub-categories.

Instructions
Cut the cardboard in a circular shape. Mark the center, which will denote the position of the sun. Use the compass to draw the orbits of the eight planets, the first four orbits being relatively closer. Use a sharp hand tool to punch a series of holes into the cardboard. These will be the points from where each planet’s cut-out will hang.

Cut 9 circles from the oak tag. Make the circle for the sun the largest, where the circles for Jupiter, Saturn, Uranus, and Neptune should be comparatively smaller. The circles for the inner planets should be the smallest. Write the name of each planet on the back of the oak tag circles. Tape the length of string to each planet including the sun. Tie them into their correct positions using a textbook as reference. Adjust the length for each string at different lengths.

Instructions
Schools must come equipped with handy equipment that students may need for science projects, especially in younger classes. Teachers should arrange for a telescope that can be relied on for detailed observations. In this project, the student must first use a telescope to view the night sky, this being possible by taking them camping to a spot far away from the city. In this way, you can view the night sky without the city lights drowning out the pinpoints of light in the sky. Through the telescope, ask each student to view the expanse above them and identity a constellation, marking it down on their circular cardboard cut-outs using the sharp object to puncture the pattern upon its surface.

Once back in the classroom, place the cardboard cut-out on the lit surface of the projector, where only the punctured holes will solely illuminate. This will create a constellation-like display on the projected surface, giving students a good idea of how to identify major constellations spread across the sky upon seeing them. Ask them to then name the constellation once it’s projected against the wall. Make camping trips a ritual every season, since constellations change during each one’s coming and passing. This project will update a child’s knowledge bank about how constellations change per season.

Instructions
This project will prove to be quite an experiment for kids. Be sure to look over each one’s progress through the process during class. The first step is to blow a sizable balloon to a point that it doesn’t stand a chance to pop while being worked on (should be round, not oval in shape). Once the knot is tied securely of the balloon’s end, mix one part of the plaster of Paris with an equal part of water making sure that the consistency is thick but not chunky; add more water if lumps are evident. Using newspaper bits, tape this over the entire surface of the balloon evenly (leave the knotted end free). Once that is completed, take bits of kitchen-roll paper and place a patchwork of this over the newspaper layer using the plaster of Paris as an adhesive (must be flattened against the balloon’s surface).

The kitchen-roll paper should be evenly applied in two layers over the newspaper, before being left aside to dry completely for a couple of hours. Once the round shape of the balloon is solid in its appearance and feel, use the needle to pop the balloon from the end where the knot dangles (the hole can be at the top, so that you can insert an object to suspend the planet). Slowly pull it out – you now have a planet to work on! Ask the students to use the face of the globe as reference from a textbook, and roughly draw out the continents while then coloring each one using the paint provided. Details like water bodies, terrain, mountaintops and such can be included for a picturesque finish. They can then display their work proudly, while also creating other planets as part of the same project for future experimentation. You could assign a different planet per student, or let groups work on one planet to make the experience engaging.

Instructions
Play dough is the fun to mold and manipulate using pressure from one’s hands. Kids who are stubborn about learning about the solar system can do so through this project. Using the play dough, have kids first grab a big chunk of orange dough, mixing in a little yellow for contrast. Once you have a nice round sun prepared, you can help students move on to other planets. Teach them things like pinching and snaking clay dough to form the rings of Saturn or how to gently carve into the mold little fissures, to place within them another color to highlight swirls that some planets’ surface have (use toothpicks to poke colored dough into thin spaces).

Once all planets have been carefully detailed and balled, place these aside before going back to the sun. Using a sharp tool, slice the bottom of the sun to give it a flattened look (or roll dough in a circular manner to support the entire model, as seen in the image) so that it can support the other planets once the model is complete. Puncture the sun’s surface with the skinny sticks, spacing them over its entire face. Using a pair of scissors, snip off the ends of the sticks to give each one an uneven length. Place the planets on each stick carefully without causing extreme damage to any. Once that is done, place the students’ models in the sun to help it dry and solidify.

Instructions
This is not only a toothsome project for kids but a tactic worth the try, on those who refuse to learn about astronomy at a young age. This project can be done for youngsters between the age group of 8 to 10. A day prior to baking, inform the class that the next day there’s going to be a big surprise in store for them, and that they’ll only get it if they thoroughly study their notes on the solar system.

Help them memorize the names of the planets and even throw in a few simple constellations that they can remember, using imagery of course. The next day, take to the classroom a freshly baked batch of cookies (ready-made will do) and a single cake enough for the class. Prepare the fondant mixes in the classroom itself.

The first thing to do is to roll fondant between the palms of your hands, creating big enough balls to design and color according to how the planets look from a textbook. Place the fondant planets on toothpicks while then sinking each one into the cake’s top. Ask students to help out with the fondant rolling and detailing (use different colors to bring our each planet’s likeness).

Once you finish with the planets, move on to spreading fondant with a rolling pin while the kids cut out stars using the cookie cutters. After the stars have been placed on the cookies and decorated (you can use sprinkles and flavored add-on for a more appealing finish), let students return to their seats. Ask the class to identify the planets in their order on the cake as you point each one out, making sure they look distinct and are in their actual formation.

Once they successfully name all the planets, reward them by cutting up the cake and distributing the slices. Support the class as part of a project to bake a cake or a large cookie with their favorite constellation on the top for a chance to win a free batch. Encourage the student who wins the cookies to share them with his/her classmates. A lesson on sharing is naturally introduced with such a project, helping students nurture one such value during class.

Science projects can be a fun time for kids to exercise their creativity and imagination. It also adds valuable information to one’s intellect while fueling questions that help them to better understand the universe we are wedged within. Experiment with projects that are both simple and slightly complex to enhance their skill-set when piecing together a project.