Relationship Between Acacia Tree and Ants

The relationship between acacia and ants is an example of mutualism. The following ScienceStruck article discusses the acacia-ant connection in detail.

The relationship between acacia and ants is an example of mutualism. The following ScienceStruck article discusses the acacia-ant connection in detail.

Several species of acacia like Acacia cornigera, Acacia collinsii, and Acacia drepanolobium have a symbiotic relationship with the ants (like Pseudomyrmex ferruginea) which thrive on them. It is amazing to see how the acacia tree and the ants benefit from each other. According to P.G. Wilmer of the University of St. Andrews, United Kingdom, and G. N. Stone from the Oxford University, this relationship is one of the best examples of mutualism.

Before I proceed, let me tell you what is mutualism. When 2 different species of organisms exist in a relationship, in which they derive benefits from each other; such a relationship is called mutualism.

How do the Ants Benefit

Every living organism has 2 essentials:

The acacia tree provides both the essentials to the ants. Consider the following points, for a better understanding.

The species of acacia mentioned above have big thorns, and they form the perfect dwelling place for ants. The ants hollow out the thorns and thrive in them. Such a shelter is also called domatia. As they live in the thorns, the ants are protected from difficult climatic conditions.

The acacia gives the necessary nourishment to the ants which live on it, as it provides them with:

It is believed that the Beltian bodies were developed as a result of the relationship between the ants and the acacia tree, which implies that the tree produces the nutrient-rich bodies only to feed the ants.

Nectar
Nectaries are found towards the base of the petioles of the acacia tree. The ants feed on the sweet carbohydrate-rich nectar secreted by the nectaries, and gain the energy that they require to sustain their lives.

How is the Acacia Tree Benefited

In return for the food and shelter that the acacia provides, the ants protect it. This can be studied in three parts.

Protection Against Insects
The ants do not harm the acacia tree, but there are several insects which might harm (wither the leaves, rot the flowers, etc.) the acacia in their conquest for food and shelter. The ants ward off all other insects which try to occupy the acacia, thus protecting the tree from any damage.

In addition to this, the ants also eliminate any plants that try to grow on, or near the acacia, hence the acacia does not need to compete for resources.

Special Features of the Acacia-Ant Relationship

The relationship between the acacia and the ant is characterized by the interesting features mentioned below.

Possessiveness of the Ants
The acacia and the ants share such a close bond that, as time goes by, the ants become very possessive about the tree on which they dwell. They also attack other species of ants which try to occupy the tree. Distinct groups of ants usually compete for the acacia.

Manipulation by the Acacia
The ants attack all the insects which try to feed on the acacia, but it does not harm the pollinators. Why? According to Wilmer and Stone, the young blossoms of the acacia make a repellent which does not allow the ants to patrol on them. It is believed that this repellent is ineffective once the pollination is over, and thus the ants can move freely on the flowers after the pollination is complete.

Ted Schultz, from the Smithsonian Institution’s National Museum of Natural History in Washington, D.C., believes that this manipulation of the patrolling of the ants is a great way to increase the productivity of the acacia, as once the ants start patrolling on the flowers after it is pollinated, it will attack any insect which comes close to the flower, thereby protecting the seeds, and undamaged seeds will eventually result in increased productivity.

There are many examples of symbiosis in nature, but very few are as interesting as the relationship between acacia tree and ants. The next time you see ants on an acacia, you better stay away from the tree, else you might end up being a victim of the ant-attack! 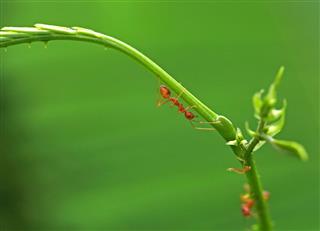 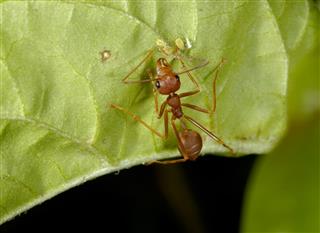 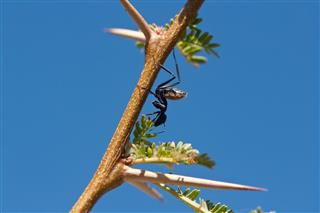