Properties and Uses of Gypsum

Gypsum is a sulfate mineral that has found numerous uses in modern times. This mineral also exhibits some interesting properties, which are discussed in this ScienceStruck article. 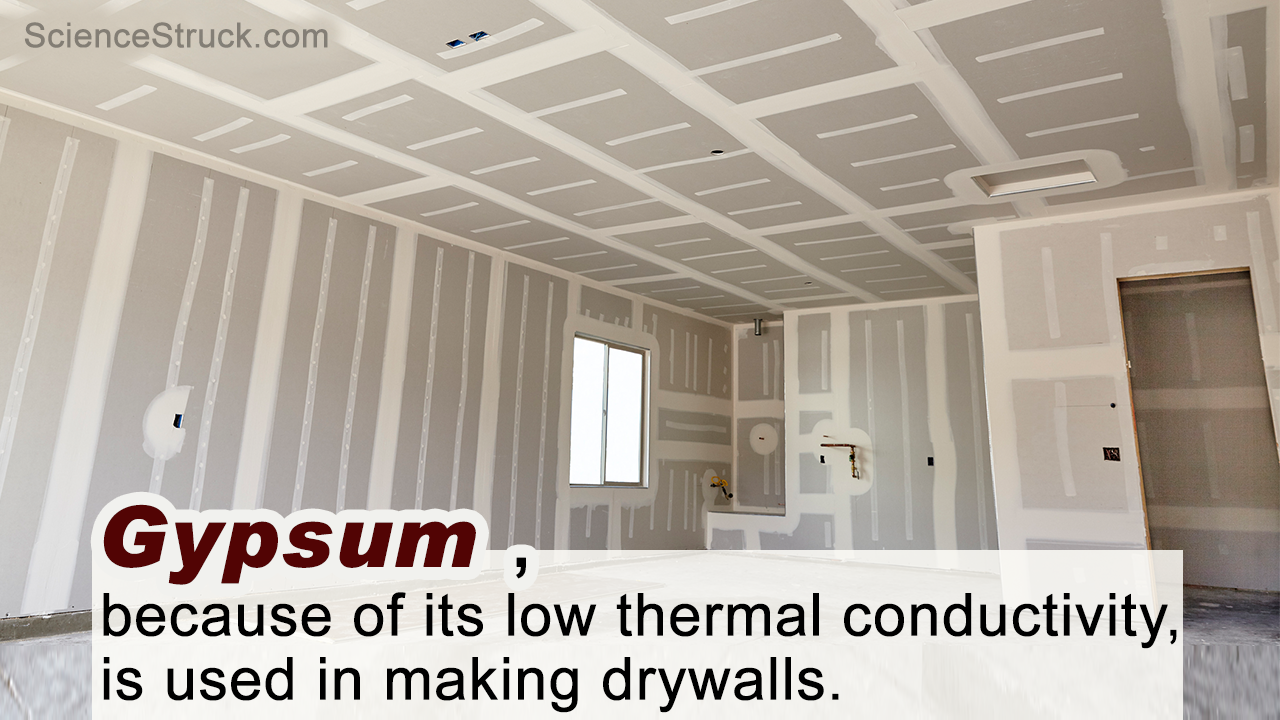 Gypsum is a sulfate mineral that has found numerous uses in modern times. This mineral also exhibits some interesting properties, which are discussed in this ScienceStruck article.

The famous White Sands National Monument in New Mexico is actually a bed of gypsum crystals.

Gypsum, also known as hydrated calcium sulfate, is a mineral that can be commonly found in marine evaporites, and in Permian and Triassic sedimentary formations. It can also be found in saline lakes, shale, limestone, dolomitic limestone, sedimentary rocks, hot springs, and some caves, where the air is dry enough to facilitate the deposition of this mineral. Fumarole fields are another place where gypsum can be found. A fumarole is basically an opening on Earth’s surface through which steam and volcanic gases come out.

Gypsum is an important constituent of cap rock, an anhydrite-gypsum rock formation. Though gypsum deposits can be found in several countries, its largest producers are, the United States, France, Italy, Canada, Australia, and Great Britain. In the United States, gypsum mainly occurs in New York, Virginia, Ohio, Michigan, Texas, Nevada, and California. Below here is a brief discussion on the uses and physical properties of gypsum, as well as how this mineral is formed in nature. 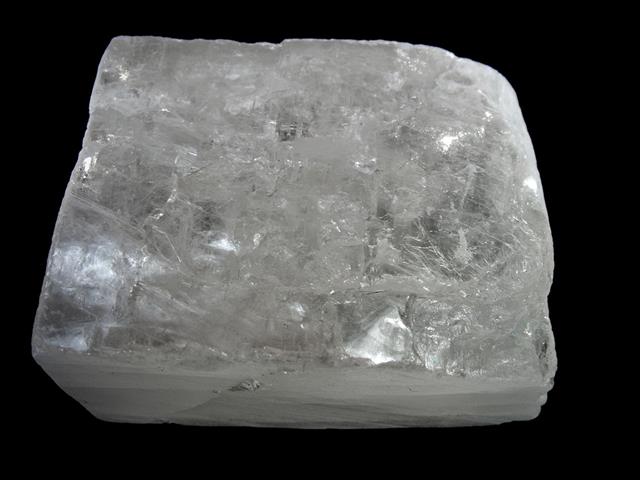 How is Gypsum Formed?

Gypsum is made up of oxygen, calcium, sulfur, and water, and its chemical formula is CaSO4·2H2O. Gypsum beds were formed due to the evaporation of water from the massive prehistoric sea basins. When water evaporates, the minerals present in it become concentrated, and crystallize. Gypsum is formed when, due to evaporation, sulfur present in water bonds with oxygen to form a sulfate. The sulfate then combines with calcium and water to form gypsum.

Gypsum can also be synthesized. Synthetic gypsum is mainly obtained from coal-fired power plants, as a by-product of flue-gas desulfurization. Flue gases are produced when coal is burned to generate electricity, and these gases contain sulfur dioxide. According to the mandate given by the Clean Air Act Amendments of 1990, sulfur dioxide has to be removed from flue gases, in order to control environmental pollution. The process of scrubbing sulfur from flue gases results in the production of several by-products, including gypsum.

★ Gypsum is a soft mineral, that is moderately soluble in water. The water solubility of this mineral is affected by temperature. Unlike other salts, gypsum becomes less soluble in water as the temperature increases. This is known as retrograde solubility, which is a distinguishing characteristic of gypsum.

★ Gypsum is usually white, colorless, or gray in color. But sometimes, it can also be found in the shades of pink, yellow, brown, and light green, mainly due to the presence of impurities. 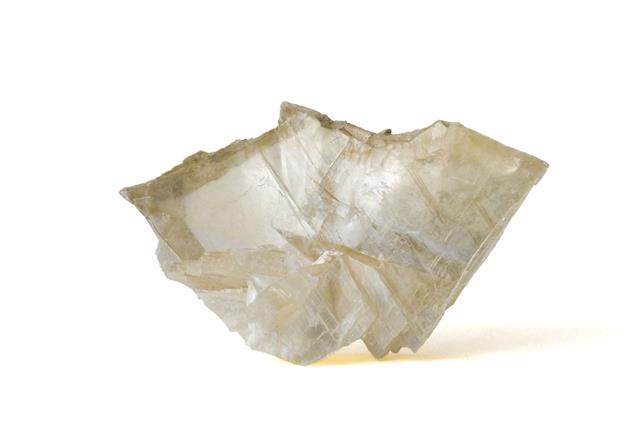 ★ Some crystals can be flexible, which can be bent by applying pressure. But, when the pressure is released, the crystals do not return to their original shape, as they are not elastic.

★ Gypsum crystals are sometimes found to occur in a form that resembles the petals of a flower. This type of formation is referred to as ‘desert rose’, as they mostly occur in arid areas or desert terrains.

★ Gypsum is known to have low thermal conductivity, which is the reason why it is used in making drywalls or wallboards. Gypsum is also known as a natural insulator.

★ When gypsum is heated, it loses water and gets converted to calcium sulfate hemihydrate, which is commonly known as ‘bassanite’. Further heating of this mineral produces anhydrous calcium sulfate or anhydrite.

★ ‘Selenite’ is one of the common varieties of gypsum, that occurs in nature in the form of flattened and twinned crystals. Selenite is usually transparent and cleavable, and possesses pearl-like luster. It can have a banded appearance as well.

★ Sometimes, selenite can occur in a silky and fibrous form, which is commonly known as ‘satin spar’. Satin spar can be milky-white or pink in color.

★ Alabaster is another variety of gypsum, that is highly valued as an ornamental stone. It has been used by the sculptors for centuries. Alabaster is granular and opaque.

The Alabaster Variety of Gypsum

The alabaster variety of gypsum was used in ancient Egypt and Mesopotamia by the sculptors. The ancient Egyptians knew how to turn gypsum into plaster of Paris about 5,000 years ago. Today, gypsum has found a wide range of uses and applications in human society, some of which are enlisted below.

★ Gypsum is used in making drywalls or plasterboards. Plasterboards are used as the finish for walls and ceilings, and for partitions.

★ Another important use of gypsum is the production of plaster of Paris. Gypsum is heated to about 300 degree Fahrenheit to produce plaster of Paris, which is also known as gypsum plaster. It is mainly used as a sculpting material.

★ Gypsum is used in making surgical and orthopedic casts, such as surgical splints and casting molds.

★ Gypsum plays an important role in agriculture as a soil additive, conditioner, and fertilizer. It helps loosen up compact or clay soil, and provides calcium and sulfur, which are essential for the healthy growth of a plant. It can also be used for removing sodium from soils having excess salinity.

★ Gypsum is used in toothpastes, shampoos, and hair products, mainly due to its binding and thickening properties.

★ Calcium sulfate acts as a coagulator in making tofu. It is also used in baking, mainly as a dough conditioner. The Chinese use this sulfate mineral to treat upset stomach and eczema.

★ Gypsum is a component of Portland cement, where it acts as a hardening retarder to control the speed at which concrete sets.

★ Satin spar, which is a variety of gypsum, is sometimes used as an ornamental stone, while alabaster is used primarily for sculpting.

★ Gypsum is used to give color to cosmetics and drugs. It has been permitted to be used as a food additive by the Food and Drug Administration (FDA) of the United States. So, this mineral is nowadays added to food as a dietary source of calcium. It can be usually found in canned vegetables, flour, ice cream, blue cheese, and white bread.

★ Gypsum plays a very important role in wine making. It helps wine makers to control the tartness of wine. Brewers also use gypsum to condition the water used in the brewing process.

To sum up, gypsum is one of the most abundant minerals that have endless uses and applications. Mining of gypsum is simple and easy, as the mineral occurs in large thick beds near the Earth’s surface. However, large-scale mining of gypsum involves considerable damage to the environment. Gypsum can also be recycled, but not much importance has been given to recycle this mineral due its abundance.