Polysaccharides are carbohydrates whose molecules are made of numerous sugar units that are bonded together. In this article, we shall study their formation, properties, functions, and much more. 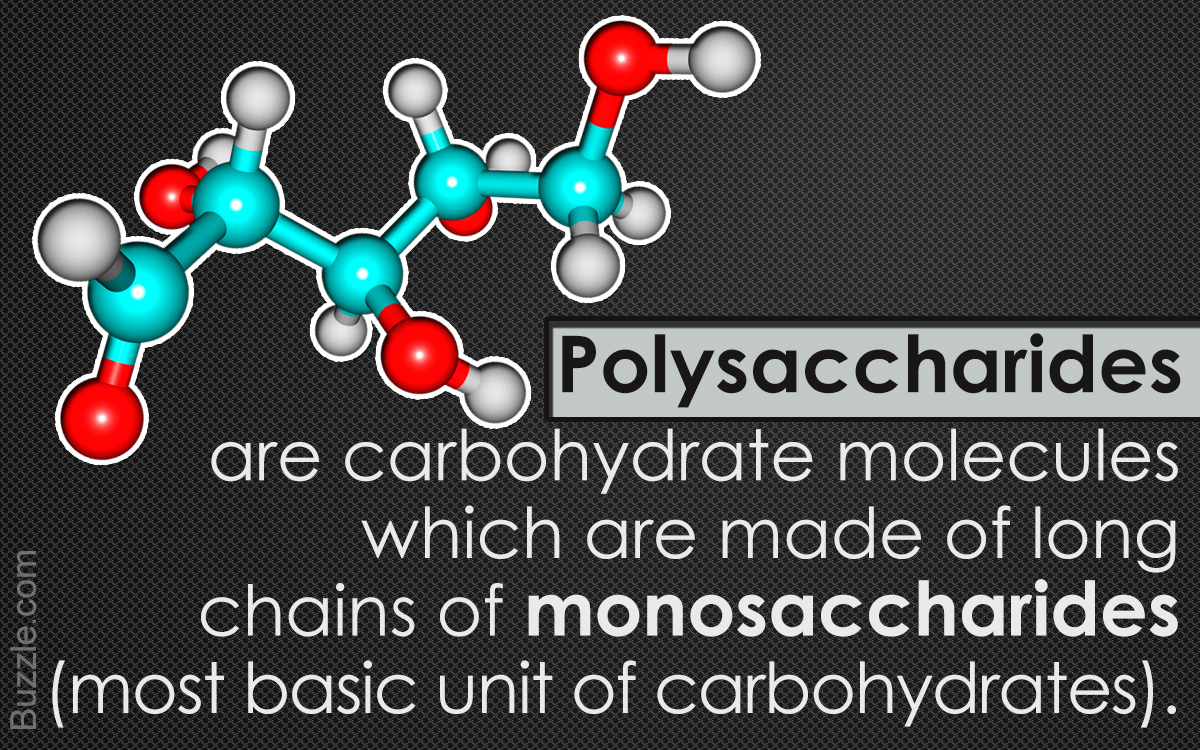 Polysaccharides are carbohydrates whose molecules are made of numerous sugar units that are bonded together. In this article, we shall study their formation, properties, functions, and much more.

Although cellulose is not digestible by humans, it is easily digested by tiny insects like termites. This is due to the presence of special microorganisms in their digestive tracts, which break the cellulose down into simple sugars.

What is a Polysaccharide?

Polysaccharides can be defined as long chains of monosaccharide (simplest form of sugar; e.g. fructose, glucose, ribose, etc.) units, which are linked together by ‘α’ glycosidic bonds. Upon hydrolysis, these compounds release oligosaccharides or monosaccharides. They can either be linear or in a branched form. These sugar compounds are exceedingly important for the working of most bodily functions in all kinds of plants and animals.

Now we’ll take a look at some polysaccharide examples, and learn about their chemical structure and important functions.

This storage polysaccharide consists of several hundred glucose molecules, and is primarily used by animals as a short-term energy storage. The glucose molecules are linked by glycosidic bonds. They are insoluble in water, but are easily broken down by an animal’s digestive system. The most common food sources for this polysaccharide are corn, potatoes, bread, rice, etc., and they form around a third of an average person’s diet.

Another storage polysaccharide that is made primarily of glucose, glycogen is used as a energy source by many forms of plant and animal life. Glycogen is saved inside the liver as an energy reserve, and is converted into glucose when the need arises. Similar to starch, the glucose molecules in glycogen are also linked by ‘α’ glycosidic bonds.

These polysaccharides are mostly found in the primary and secondary cell walls of plants, and are formed by the combination of arabinose and xylose. These molecules mainly serve structural roles in plants. They also contain ferulic and phenolic acids that protect against fungal infections. In human diet, they are linked to antioxidant functions in the body.

This structural polysaccharide is the most commonly found organic molecular compound on Earth, as it forms the cell walls in most plants, giving them structure and shape. These organic molecules can be most commonly found in cotton, wood, and paper. The glucose molecules in cellulose are bonded by ‘β’ glycosidic bonds, which differ by having more hydrogen bonds between each glucose unit. This makes the bonds much stronger than that of glycogen or starch, which explains why wood is a tough material. Cellulose also acts as a source of dietary fiber in our bodies, and helps maintain the processes of the digestive tract. It is found commonly in all kinds of fruits, vegetables, and nuts.

It is primarily found in items such as oats, nuts, beans, apples, etc., and in the non-woody parts of all plants. Pectin forms a gel-like, soluble fiber source, and helps increase the duration of how long any food stays in the stomach, helping one to feel full for a longer period of time. These molecules are also used to synthesize glycerol, fatty acids, and amino acids. It is used in the food processing industry as a gelling agent, thickening agent, and as a stabilizer.

Polysaccharides come in the form of homoglycans or heteroglycans. Both forms can be created biologically as well as synthetically. Homoglycans are usually found in the stems of plants, while heteroglycans are found in animals. Heteroglycans give shape to the tissues of the body, form fluids between joints, and also act as anticoagulants, along with many other important uses. Homoglycans, on the other hand, primarily function to repair damage to the plants, such as a broken tree bark.